Skip to content
You are here
Home > Stories > Angels are back in the 3A fold; Winnebago banking on experience 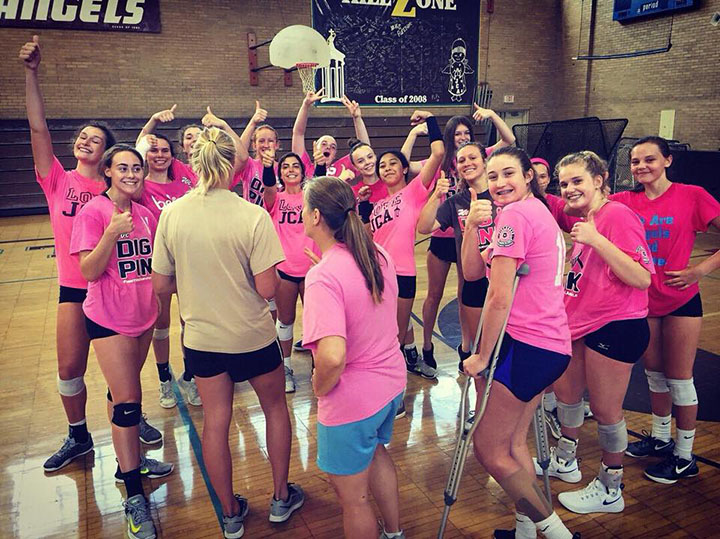 After spending two seasons in Class 4A, Joliet Catholic Academy ranks among the favorites to win the 3A title in 2018.

Illprepvb.com continues its coverage of the 2018 Illinois girls high school season with another set of team previews.

School: Glenbard South
Conference: Upstate Eight (first year)
Head coach: Chad Grant
Last season’s highlights: 22-15 overall, Metro Suburban Blue conference champions, eighth place at Wheaton North tournament, third place at Willowbrook tournament, won Glenbard West tournament, eighth place at Plainfield Central tournament, lost 25-20, 20-25, 25-22 to Trinity in a Class 3A regional final.
Top returnees: 6-3 senior middle blocker and Drake basketball recruit Maggie Bair (376 kills, 214 digs, 114 blocks, 17 aces, 6-foot senior outside hitter Beth Kohl (151 kills), 5-4 junior outside hitter/libero Kathleen Millett (131 kills, 267 digs, 16 blocks, 42 aces), 5-9 junior setter Sadie Camfield (717 assists, 98 digs, 49 kills, 37 blocks, 35 aces), 5-11 junior outside/middle hitter Lauren Sweeton (11 kills, 13 blocks), 5-7 junior opposite hitter Jess Villa (27 kills, 11 blocks), 5-5 senior defensive specialist Isabel Santana (62 digs, 35 aces).
Coach’s quote: “This team has a lot of potential. We have one of the better offensive options in the state in Maggie Bair, who plays six rotations out of the middle. Camfield is a solid all-around player and leader, Sweeton is versatile, powerful, and improved, and Millett is an impressive hitter for her size. This team is not flashy, outside of Maggie, but they play really well together and learned how to win in the final two-thirds of last season going 18-8 after a 4-7 start.
Outlook: Glenbard South is likely to take some lumps early with only three players who play club during the off-season and a tough season-opening tournament at Wheaton North, but with 13 of 15 players back including three all-conference selections (Bair, Kohl and Millett), the Raiders are likely to make a strong push as the season goes on and should be a tough out in the state tournament.
Did you know? Maggie Bair averaged more than 16 points and 10 rebounds per game while leading Glenbard South to a third-place finish in Class 3A girls basketball last March. She also won the Queen of the Hill (3-point) competition in 2017 and qualified for state in the shot put in 2018.

School: Joliet Catholic Academy
Conference: East Suburban Catholic
Head coach: Christine Scheibe
Last season’s highlights: 28-8 overall, 5-2 in conference (three-way tie for second place behind Marist), first at Metea Valley/Oswego East Tournament, first at West Aurora Tournament, second at Asics Challenge, fifth at Glenbard East’s Autumnfest, lost 25-21, 23-25, 26-24 to Waubonsie Valley in a Class 4A regional final.
Top returnees: 5-8 senior outside hitter and Arizona State recruit Emily Holbrook (261 kills, 146 digs), 6-2 sophomore outside hitter Emily Wilson (228 kills, 32 blocks), 6-2 junior middle hitter Bella Ray (139 kills, 85 blocks), 5-9 senior rightside hitter Sophie Krzysciak (126 kills, 65 assists, 115 digs).
Top newcomer: 5-11 sophomore rightside hitter Jillian Gray.
Coach’s quote: “Things look very positive for the upcoming season. I will be putting the tallest lineup that I have ever used on the floor and they are all versatile, well-rounded players. They all have a lot of athleticism and worked hard in the offseason to improve their skills. We have a good combination of seniority and leadership to complement our talented youth. Gray is a dynamic hitter who can do everything because she has played every position growing up. She will give us a bigger block on the right and added offense.
Outlook: The good news for Joliet Catholic? After a couple of years in Class 4A, the Angels will rejoin the Class 3A ranks in 2018. The bad news for the rest of the state? Joliet Catholic drops down to Class 3A in 2018.
Did you know? Wilson was named an All-American after helping to lead SPVB 15 Elite (Sports Performance, Aurora, Illinois) to a national AAU championship in the 15 Open division.