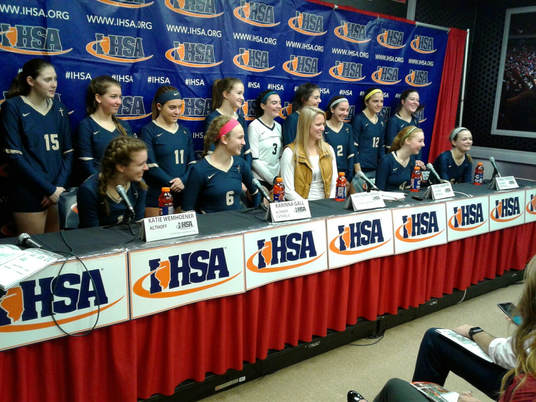 Belleville Althoff meets the media after its semifinal win over Normal U-High.
No surprises here.Minooka and Marist advanced to their IHSA Class 4A Girls Volleyball state championship showdown by winning their semifinal matches Friday at Redbird Arena on the campus of Illinois State University in Normal.

One year after falling in the title match to eventual national champion Mother McAuley, Minooka (39-2) survived a few anxious moments late in the first set to defeat St. Charles North 25-20, 25-12.

Six-foot senior outside Rocky Perinar led the Indians with 12 kills and 5 digs, 6-1 senior outside Alli Papesh and 6-2 senior outside Holly Bonde each had 8 kills, and 5-8 sophomore setter Zoey Seput added 22 assists and 9 digs.

“I think having the experience from last year, we came in doing exactly what we wanted to do,” Papesh said. “We talked about it during practice yesterday. This is what we have to do, this is how we’re going to do it, and we came out today and did it.”

“We don’t really focus too much on what our opponents do because we feel that the only way we’re going to lose is if we beat ourselves,” Papesh said. “We didn’t do that, obviously. Everybody did their jobs. That why we won.”

Kills by Perinar and Bonde ended the first set, then Minooka flexed it muscle to cruise to an easy second-set win.

“They are a very, very talented team and very big,” said St. Charles North coach Lindsey Hawkins of Minooka. “I thought we passed extremely well but we just couldn’t really get around their block. Their block was amazing.”

“We tried as hard as we could to get (Minooka) out of system, and when we did we played really well,” Hawkins said. “But at the end of the day, they are really, really talented and well-rounded.”

Marist (40-1) exploited Crystal Lake Central’s errors in the early stages of the first set, then withstood the Tigers’ late 8-3 run that cut into a 20-14 deficit in Game 2 to advance to the championship match with a 25-13, 25-22 victory.

“We knew we were going to get a tough test from Crystal Lake Central,” said Marist coach Jordan Vidovic. “They are a strong, physical team with some really good young players. Thank you We knew we had to be ready for them.”

A kill by Savannah Thompson gave Marist  14-3 lead in Game 1.

“We were able to put some pressure on them and really tighten up the court defensively, which fed into our offense,” Vidovic said. “They did put together a couple of runs that I thought we handled really well.”

A service ace by Madde Blake sparked the Tigers’ 8-3 run in Game 2 after Marist had led by as many as 5 points early in the set at 14-9 on a kill by sophomore Camryn Hannah.

But a service error by the Tigers and a net violation sent Crystal Lake Central into Saturday’s third-place game at 7:25 p.m.

“Marist is a phenomenal team,” said Crystal Lake Central coach Lisa Brunstrum. “They got us out of system and weren’t able to run our attack. In the second half of the first set and the second set, we played more aggressively, especially with our serves, and our defense got a lot stronger.”

“It’s very common,” Welch said. “Either they serve me the whole time or they don’t serve me at all. They try to get me out of system or get in my head. When I got aced those two times (late in the second set with Resurrection nursing a 23-20 lead), I knew I had to pick myself back up.”

Both teams had chances to win the first set earlier, but St. Viator’s Catherine Hickey netted two balls with St. Viator leading 24-20 and 24-21, and Welch was blocked by a pair of defenders with the Bandits in front 28-27.

The Lions finally put an end to the marathon game when Madison McEnaney’s serve deflected off a Resurrection defender.

The second set also had its fair share of drama. After trailing early, Resurrection took the lead for good at 14-13, and despite Welch’s serve receive errors that allowed St. Viator to get within 23-22, the Bandits won on a St. Viator service error.

The third set was all Resurrection, which raced out to leads of 10-5 and 16-10, winning on a kill by Welch.

Hickey finished with 14 kills and Kaylee Liberty, a 5-9 junior, added 8 for St. Viator.

In the other semifinal, Belleville Althoff briefly flirted with disaster in the second set before defeating Normal U-High, winning 25-13, 25-21.

The Crusaders wasted little time taking control of the first set, grabbing a 6-1 lead and silencing  Normal U-High’s boisterous backing. The advantage swelled to 19-10 on a kill by Karinna Gall before Katie Wemhoener’s putaway ended the set.

“We wanted to take away their momentum, their energy,” said Belleville Althoff coach Sarah Thomas-Dietrich.  “We focus on how we play and make changes as needed.”

The Pioneers fell behind by as many as 6 points in the second set, but fought back to within 22-21 before Addie Burris’ kill gave the Crusaders some breathing room. Burris finished the set and the match with another kill after a U-High hitting error gave the winners match point.

“We talked about avoiding (what happened in) the first set,” said Normal U-High coach Mike Bolhuis. “The second set was more like we have played all year.”