Skip to content
You are here
Home > Stories > Benet, Brother Rice should be among state’s best 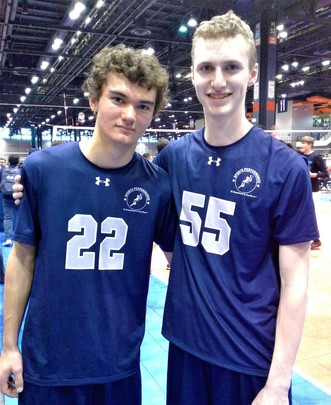 Benet’s outstanding season, which included a 7-1 finish in the East Suburban Catholic Conference and a 25-11 overall record, was interrupted in the regional championship match by Plainfield North.

“We return almost all of our starters and have several new talented additions,” second-year coach Jeff Steinberg said. “Returning as many players as we do and with another year of experience, we are looking to make a push deep into the postseason.”

Folts, a 6-foot-3 outside hitter, begins his third season on varsity after recording 250 kills, 14 aces, 15 blocks and 77 digs as a junior. The 6-7 Crnkovich is also in his third season with the big club after contributing 75 kills and 50 blocks in 2017.

Three-year starter Kmieciak is making the move from libero to setter as Steinberg looks to replace the setting duo of Kyle Burns and Hunter Michniak. Sean Becker succeeds Kmieciak as libero after a season that included 130 digs, 30 aces and a 2.15 passing efficiency.

Two newcomers who should make an immediate impact are 6-5 sophomore opposite Nolan Tomshack (SPVB 16 Elite) and 6-2 freshman opposite hitter Augie Mazza.

Downers Grove North advanced to the sectional finals for the first time since 1994 before running into Glenbard West. The Trojans were 31-8 overall and 4-2 in the West Suburban Silver.

However, seven of the Trojans’ top players graduated in the spring.

“We will be on the young side,” veteran Downers Grove North coach Mark Wasik said. “That said, we have two of the top attackers in the area who will anchor our team in Owen Wahlgren and Michael Price.”

Wahlgren, who also plays for SPVB 18 Elite, signed with University of California Irvine and gained National Team High Performance experience this summer following a junior season that featured 131 kills, 47 blocks and 11 aces. Price, a 6-3 outside hitter who plays club for SPVB 18 Bravo, added 195 kills, 68 digs, 18 blocks and 22 aces in 2017.

“Our top newcomers should be able to contribute nicely and allow us to be competitive,” Wasik said. “The biggest question will be our setting, where we will be young and somewhat undersized but capable nonetheless.”

“2018 should prove to be an interesting year,” Metea Valley coach John Aister said. “Most of the core players from 2017 return with another year of development and experience under their belts. This team has to find ways to close out tight games, something that has haunted us in the past.”

“The big story line for us will be how the big two of Kohut and Nealon carry us throughout the season,” Aister said. “Kohut is within striking distance of some Metea individual records both for a season and career, and with a strong year, Nealon can establish himself as one of the better setters to play for the Mustangs.”

“We are determined to turn some heads both in conference play and the postseason,” the coach added. “The goal continues to be to push the limits of our own expectations and stay in
matches against quality opponents.”

With six state finals appearances and 13 regional titles since 2003, Brother Rice is one of the most successful boys’ programs in Illinois. The Crusaders went 31-11, won the Chicago Catholic League and finished fourth in the state in 2017, and could easily better those numbers this spring.

“We return a good group of players, including five who played for Ultimate 18 Gold,” Brother Rice coach Dan Dwyer said. “They have a great chemistry.  We need to work the juniors into our tempo offense, but that shouldn’t take long.”

“We play one of the toughest schedules in state, so we will take some lumps,” Dwyer said. “But we should contend for a state berth at the end of the season.”

The Thomas Kovanic era is over at West Aurora.

Kovanic amassed 1,237 kills, 103 blocks and 137 service aces in his career at West Aurora. He was a three-time first team all-state selection, a four-time All-Upstate 8 Conference selection and led the Blackhawks (29-7) to a regional title in 2017.

However, the 6-foot-8 Kovanic now plies his trade for Loyola University, and West Aurora will start over.

“This should be a fun group, and I expect, quite competitive,” Koskinaris said.