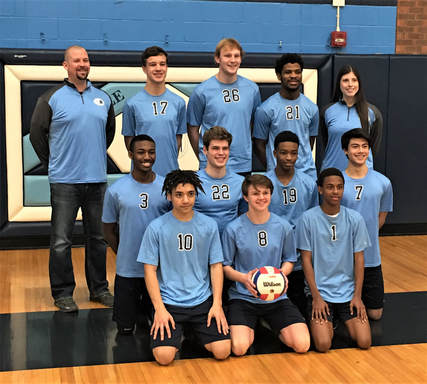 Coach Joe Nesbit and Belleville East are starting over after graduating five starters from 2017 and losing another starter to a knee injury.
Stephanie KaegebeinBoys volleyball in Southern Illinois is growing.

2018 marks the 10th season of play for Belleville East, Belleville West, East St. Louis and Edwardsville, the latter reaching the state quarterfinals in 2011 and 2014. Programs at Belleville Althoff, O’Fallon and Granite City made their debut a few years earlier.

Since then, Alton and Metro-East Lutheran have started programs while other schools – like Alton Marquette — have begun adding junior varsity teams with the hopes of developing more interest and competing at the varsity level in the future.

Joe Nesbit and the Lancers are starting over after graduating their entire starting lineup – save one player, who tore his knee during the basketball season and will not return this spring.

“Having an entirely new lineup will be interesting but exciting,” Nesbit said. “Our program features good senior leadership with a few new seniors in the program who are learning quickly. No one in our area is expecting much out of us this year. We are hoping to surprise some teams.”

Five-foot-11 setter Max DiPasquale did see some playing time for Belleville East (15-11, 8-4 in the Southwestern Conference) last year. He played the final three matches of the season after a lineup change.

“DiPasquale is an outstanding all-around kid,” Nesbit said. “He is a very talented saxophonist and was a three-sport athlete earlier in high school. This year, he has decided to only play volleyball. He looks to have a very strong senior season.”

“We do not have any juniors in our program, but we feature a lot of optimism and promise in our younger players from the sophomore and freshmen classes,” he added.

Nesbit said that Edwardsville and O’Fallon look to be conference frontrunners.

Mark Zelisko was a one-man wrecking crew for the Red Devils last spring, leading his team to the state quarterfinals before they fell to Brother Rice 25-17, 25-20 to finish 29-11 (5-1 in the West Suburban Silver).

“John is one of the best players in the state,” Kaegebein said. “Strategic, smart and poised, John’s athletic ability allows him to make plays look easier than they are. John played outside hitter for his club team (West Suburban Storm 18 Navy) this season, showcasing his all-around volleyball ability.”

Tienken (West Suburban Storm 18 Navy) begins his thirTd season as a varsity starter and will be counted on to become a bigger part of the offense. Meanwhile, Snyder is Hinsdale Central’s No. 1 option at the pin after growing a few inches during the past year.

“I expect Cal to put up huge numbers with Zolpe running the offense,” Kaegebein said.

Joining Zolpe, Tienken and Snyder in the starting rotation will be 5-7 junior libero Gavin Schwarz (117 digs, 20 aces in 2017) and 5-10 junior outside hitter Richie Lozanoski, who moves up from the junior varsity.

“We realize that things beyond our control have to go our way, but our goal this season is a top four finish at state,” Kaegebein said. “There are important shoes to fill, but only graduating three seniors from last year’s team means the team returns with a lot of experience.”

Brian Zerfas, a member of West Aurora’s 2005 state qualifying team, begins his third season as head coach at Oswego East armed with a team loaded with size, skill and experience.

“This season is one that our program has been waiting for,” he said. “Five years ago, we won only four matches and this year we feel like we have an opportunity to make a statement. We realize newer programs like ours don’t always get that opportunity, and we are excited to embrace the challenge.”

Oswego East won a school record 20 matches last season (20-15, 9-5 in the Southwest Prairie Conference) and graduated only one starter from that team – Colin McClintic, a 6-10 freshman at Lewis University.

Hard-hitting sophomore Anthony Torres (SPVB 16 Alpha) will find his way on the court.

“Collin and Cade Harrison are both gritty players constantly attacking and driving for the ball with incredible determination,” Zerfas said. “We have a fantastic pair of athletic middles in Winkfield and Rivera. Jorgensen re-wrote every passing record in the book for us.

“Last season was a disappointing year, but an important one for such a young team to take some lumps and learn from them,” he said. “We have strong senior leadership this year and the team has come back hungry and determined to turn heads. “

“We have some strong hitters coming back, but have had a focus of doing whatever it takes to keep the ball in play on defense,” Lucchetti said.

Back for this third season on varsity is outside hitter Kyle Wells (Adversity 18 Purple), who will be joined on the outside from setter-turned attacker

Freddy Harris, who got some playing time in 2017, will fill the other starting middle hitter position. Caden Fox returns at libero after working as a defensive specialist last season. Taylor Vander-Jeugdt (Adversity 18 Black) and Andrew Wagan will handle setting chores.

New faces who will compete for starting roles include Alex Cretors (Adversity 18 Black) at either outside, rightside or middle; Ethan Fabrie and Peyton Hines at the right side; and Christian McCaughey, Bryan Petty and Joe Zdarsky (Adversity 17 Black) at defensive specialist.

“I think it is really good for us that there is competition going on for a lot of the positions,” Chen said. “I believe that will help us in the long run that these guys are competing day in and day out.”

Inexperience.  That’s the operative word at South Elgin in 2018.

”We are only returning two guys who saw any playing time last year, so we don’t have a lot of experience,” said coach Adam Plach, who begins his 10th season at the Storm helm. “This is a year with a lot of new faces We have some sophomores who will be competing for playing time, so I look forward to what they have to bring to the table.”

Back from last year’s team that went 10-23 (2-7 in the Upstate Eight Conference) and lost in the  regional semifinals to Lake Park are 6-foot outside hitter King Thomas, 5-7 defensive specialist Edwin Leon, 6-6 junior middle hitter Vincent Miszkiewicz and 5-10 setter Sergio Mares.

“We will need to build our team chemistry, and some of our new guys are going to need to grow up quickly and learn what varsity volleyball is like,” Plach said. “We approach every year with some of the same goals — be the best team in (School District ) U-46, be in the top half of the conference and finish in the top half of all of our tournaments.”

Glenbard East, St. Charles North and West Aurora figure to be the top teams in the Upstate Eight.

“We lost many good players, but we have players performing well to move into those roles,” coach Mary K. Brown said. “We’re going to be very competitive with 13 of our 15 players taller than 6-foot.”

The best of the veterans is 6-1 junior outside hitter Jack Yurkanin (Ultimate B17 Gold), a strong hitter, server and defender and one of the top players in his class. Also back is 6-2 outside hitter Garrett McCrea.

Six-foot-2 junior Sebi Olmos should be a solid anchor in the backcourt while 6-3 George Hinchliffe should provide some punch from the right side.

Palatine welcomes back nine seniors and every starter from the 25-13 team that fell to Stevenson 25-21, 25-19 in the Fremd regional championship match.

That was enough to keep coach Frank Stark around for one more year.

“This will be my last year coaching so I can spend time with my five kids who are heavily involved in their own sports,” he said. “I specifically chose this group to ‘graduate’ with because of how special they are. “

Those nine seniors include four-year starting outside hitter Johnny O’Shea, a rare three-sport athlete (basketball) who is committed to Butler to play Division 1 football, and three-year starting rightside Camden Hill.

Two-year starting seniors include libero Conor Nix and middle hitters Bryant Smith and Leo Donlin, while junior outside hitter Curtis McClenan is a three-year starter and junior Ben Rinella is back for his second season as the team’s starting setter.

“This is a very strong group of kids,” Stark said. “They have been amazing friends since grade school. They are special. We have competitors and volleyball players this year. The work ethic is the best I have ever had.”