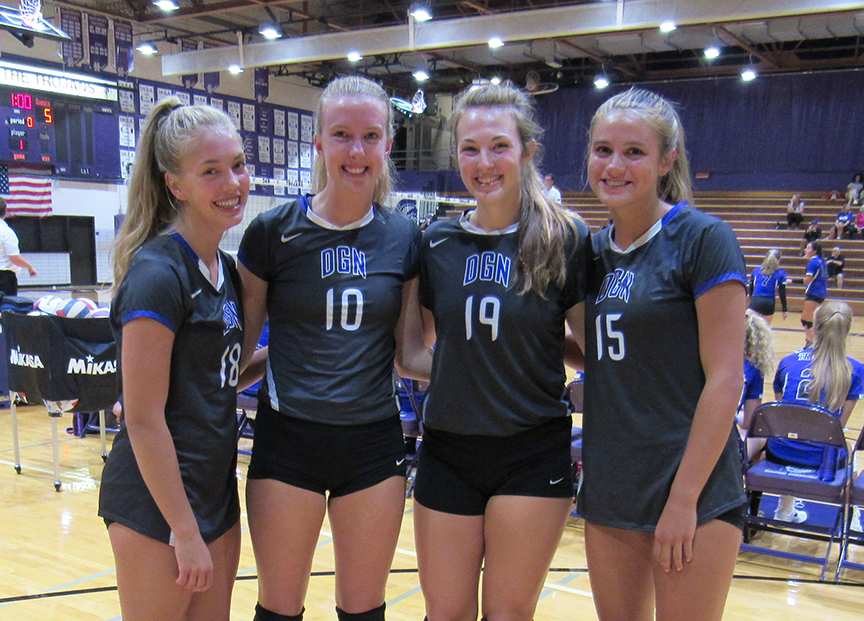 Beth Dunlap (far left), who played for Downers Grove North and 1st Alliance Volleyball Club, died from injuries she sustained after being struck by a car outside school February 19.

That was the message from the father of Beth Dunlap to the players from any club or age while his daughter was fighting for her life after being struck by a car outside the school early last Tuesday morning.

“Beth is No. 18 for her high school volleyball team at Downers Grove North,” her father continued. “She really likes that number.”

Tragically, Dunlap, a 5-foot-10 junior setter who guided Downers Grove North to the IHSA Class 4A championship game last fall and was a rising star at 1st Alliance Volleyball Club, died from her injuries Friday.

“There are so many things to say about Beth, and yet I’m at a loss given how tragic and unbelievable this is,” said Mark Wasik, head volleyball coach at Downers Grove North.

“I know that her passing is a reminder of how precious each of our kids are, and a reminder of how blessed and privileged we as a coaching staff have been to be able to coach Beth and her teammates,” Wasik said.

“Beth was so fiery, feisty, a natural competitor,” said 1st Alliance Volleyball Club coach Elizabeth Baetzel. “She absolutely loved to play volleyball and loved being with her teammates.

“She has touched so many lives in the volleyball community – players, coaches, teammates, friends, parents,” Baetzel said. “She will always be in our hearts.”

Dunlap was hit at approximately 10:55 a.m. in the intersection of Main and Grant Streets in Downers Grove. A preliminary investigation indicated that Dunlap was crossing Main Street in the marked crosswalk when struck by a vehicle traveling southbound.

“Beth was sassy, fun, spunky, feisty and a fierce competitor,” said Lions Jrs.’ Melissa Cox. “She hated to lose. Beth was a setter that led her team with phenomenal defense, a tough serve and sweet, soft setter hands. She was light on her feet, quick to the ball and made jump-setting look easy.

“She was one heck of a player and will be missed on and off the court.”

“Beth led us on a magical state run that made school history, and now we as a community are grieving her passing all within three-months’ time,” Wasik said. “She had an entire life ahead of her and it was taken by a senseless accident that was no fault of her own.

“Beth was a competitor … she was feisty, intelligent, fun-loving, stubborn, sincere, and had a beautiful spirit that will be remembered forever among all that knew her.”

“She put in the extra time and reps from the time she was a little girl to be the best setter she could be,” Heatherly said. “She was a leader at setters practice every Monday night, and our young setters looked up to her.”

Last weekend, Dunlap led 1st Alliance 17 Black to a third-place finish in the 17 Open division at the 19 Nike President’s Day Classic at the America Center in St. Louis, Missouri.

“Beth will always be a part of this team,” McGuire said. “We will hear her voice when we celebrate our wins and we will see her smile when we make big defensive plays. Her courage and fight over the last week is a true representation of the Beth’s competitiveness.”

“1st Alliance will continue to remember her spirit and drive and will fight for her in the incoming days and years,” Cox said. “Her love for the game, her teammates, her family and her friends will never be forgotten.”

Visitation for Beth will be from 4:00-8:00 p.m. on Friday, March 1, at Adams-Winterfield and Sullivan Funeral Home, 4343 Main Street (one block south of Ogden Avenue), in Downers Grove. A funeral service will be held at 1:00 p.m. on Saturday, March 2, at the First United Methodist Church, 1032 Maple Avenue, in Downers Grove. Interment will be private.

In lieu of flowers, a trust fund called the “Beth Dunlap 18 Fund” has been set up at Chase Bank (deposits can be made at any Chase location). All the proceeds from the trust fund will be used to benefit First United Methodist Church, www.dgfumc.org, and to launch a private charitable fund to benefit underprivileged youth volleyball players.

The goal of the Beth Dunlap 18 Fund will be to accomplish 18 acts of kindness annually in the volleyball community to help underprivileged youth volleyball players enjoy the game.

Our hearts are so heavy but grateful to have known Beth. We are praying for the Dunlap family.