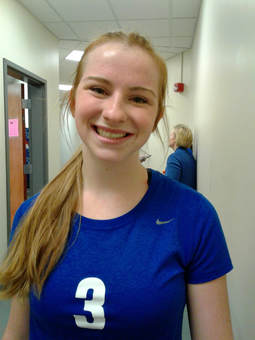 Payson Seymour’s Kamryn Flesner picked a good time to have the best match of her career.

Flesner had 12 kills, including three in a row to spark a closing 13-3 run in Game 1, and hit a staggering .526 to lead the favorite Lady Indians to a 25-21, 25-13 victory over Newark in a semifinal of the IHSA Girls Volleyball Class 1A State Finals Friday at Redbird Arena on the campus of Illinois State University.

Newark (34-4) came out sizzling in the first set of its semifinal with Payson Seymour, building leads of 17-11 and 18-13. Newark’s sensational 5-foot-11 freshman Madi Malone had 4 of her team-high 8 kills over the first 30 points of the match.

But a pair of kills by Flesner got the Lady Indians within 18-15, prompting a Newark timeout. Flesner added another kill on the other side of the timeout, and Payson Seymour was in business.

“Honestly, I didn’t even know what the score was,” Flesner said. “I don’t even look at the scoreboard. I always feel we’re in control every single game even if we’re down. I never had a doubt in my mind.

“My team was really hyping me up,” the 5-9 senior added. “We had a huge student section for our school, so that was very good. I was so excited I think I was jumping higher with all the enthusiasm.”

Payson Seymour turned the tables on the Lady Norsemen in Game 2, grabbing an early 11-5 lead. But unlike the Lady Indians in Game 1, Newark was unable to mount a sustained and lengthy comeback.

“I was so excited about the way we came out,” Newark coach Tonya Grayson said. “The girls came out pumped up. But Payson Seymour started making some runs at us, then they got on that little push at the end of the first set.

“After they built that sizable lead in Game 2, I felt we were just trading points with them,” the coach added. “That made the difference in the match.”

“Newark has some really great players,” said Payson Seymour coach Teresa Loos-Tedrow. “Malone is an awesome player. She’s just a freshman and she’s going to be phenomenal. We knew that we had to key on her and play our game.”

“I wasn’t aware of that (the record),” said Megan Schlechte, who was set 55 times during the match. “There were just times in the match when the ball was set to the net and I was the only option. It felt good.”

The Comets (34-6) needed every one of Megan Schlechte’s kills after Durand won Game 2 on back-to-back kills by 6-foot middle hitter Kaite Asche after Stewardson-Strasburg rallied from a 21-17 deficit to tie the set at 24-24 on a kill by Maria Gentry.

Stewardson-Strasburg took command of the third set early, building leads of 8-3, 11-6 and 17-13. Durand closed within 17-16 on an ace by 5-4 junior setter Marissa Kelsey, but kills by Megan Schlechte and a pair by 5-10 senior outside hitter Kasey Bean ended the threat.

In Class 2A, Quincy Notre Dame (33-8) will meet Champaign St. Thomas More (38-3) for the state title Saturday at 1:55 p.m. after both won their semifinal matches in straight sets.

“One thing the kids we have brought up have shown us over and over is that they’re athletic and they understand the game of volleyball,” said QND coach Rich Meyer. “Their volleyball IQ is extremely high.

“They understand the game and they understand what it takes to win,” he added. “It’s like they see the court and they recognize what they can do and they do it. Sometimes kids don’t have that.”

“I coached these kids on the junior high level and they have won every year,” Meyer said. “It seems the more pressure we put on them the better they get.”

“We focus on five games to 5 (points), so if we can control our serves and control our serve-receive we’ll be in good shape,” Allison said. “We usually let up in the second set, and one of the first things we said between games was ‘Don’t let up.’”

Harvest Christian (29-12) took a brief 8-6 lead in Game 2 and was still within 20-19 on a service ace by Hannah Griffith before the Sabers pulled away on two hitting errors by the Lions and kills by Nakaya Hughes and Allison.

“St. Thomas More is one the best teams we’ve seen all year, and we’ve played some of the biggest teams out there,” said Harvest Christian coach Mike Bui said. “We just couldn’t stop them.”

“The environment was really nerve-racking for our kids to start, but we did a really good job in the second game,” he added. “You can only do so much against big kids who can hit the ball hard.”