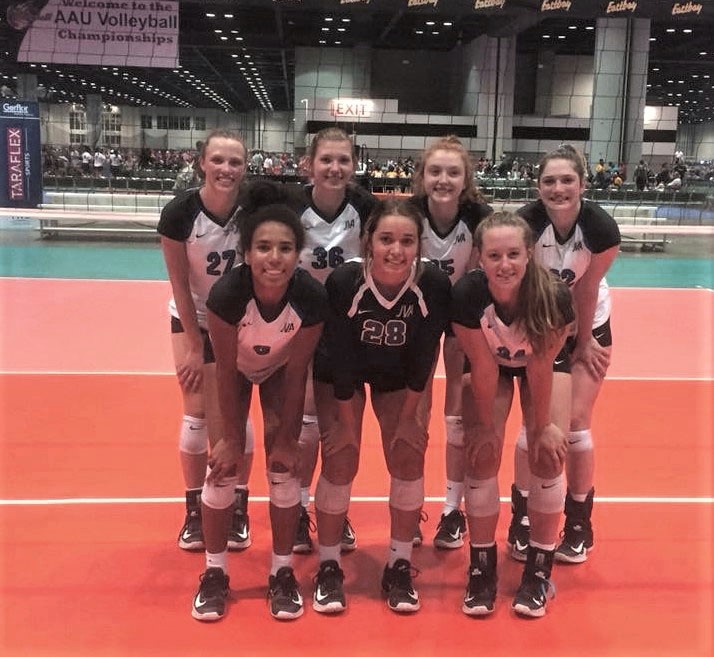 The “Magnificent Seven” came up a few points shy of claiming a national championship in the 17 Premier division of the AAU Boys and Girls Junior National Championships Sunday in Orlando, Florida.

“It was a great match,” Fusion 17 Red coach Joe Davidson said of the final. “(Palm Beach) is really, really good. They played well. When you get to the championship match, everybody deserves to be there. We just got beat.”

Fusion 17 Red dropped only one set all weekend heading into the championship, defeating Mizuno Northern Lights 17-2 out of Burnsville, Minnesota, 27-25, 20-25, 15-12 in Round 4 of Gold Pool play on Saturday.

“The girls played awesome all week,” Davidson said. “They did everything we asked them to do. They’re an awesome team, awesome volleyball players and really good kids. I was fortunate to be a part of that.

“Hopefully, we’ll make another run next year,” he added.

Elsewhere Sunday, Bloomington-based Illini Elite 17 Cardinal went 9-2 and finished third in the 17 Open division after losing to A5 Mizuno 171 Jing out of Alpharetta, Georgia, 25-16, 25-19 in the semifinals.

“These girls worked so hard all year and everything clicked at the right time,” Illini Elite 17 Cardinal coach Michelle Erins said. “I’m really proud of them. They’re a really special group.”

“That team was something special,” Erins said of Infinity. “They worked really hard and don’t go away. They had two very, very strong hitters, and they keep coming back at you.”

Illini Elite 17 Cardinal countered with two big and powerful outside hitters of its own — Hartsburg-Emden’s 6-foot Anna Hayes and Mahomet-Seymour’s 5-11 Samantha Matthews — who were both named All-Americans.

“With a few exceptions, the two of them never came off the court,” Erins said. “They hit about half of our balls.” 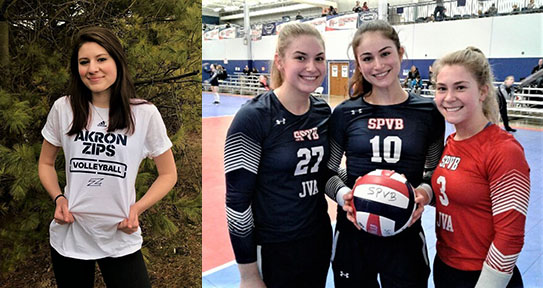 In the 18 Classic division, Jenna Garrett, a 5-8 setter from Batavia, was named MVP after leading Sports Performance 18 Navy to a 25-22, 25-16 victory over Southern Performance 18 National Julie out of Irondale, Alabama, and the Aurora-based club’s third national championship in Orlando.

Members of the third-place team out of Chicago are 5-5 libero Leah Kodat, 6-2 middle blocker Brittany Wells and 5-11 setter Schuyler Williams from Wheaton Academy, and 5-9 outside hitter Maya Popernik and 6-1 middle blocker Atieno Hope from Whitney Young.

Named All-Americans from Chicago Elite 18 Elite were 5-10 outside hitter Jillian Kavalauskas from Jones and 6-1 opposite hitter Lia Moore from Chicago Christian.

Also in the 18 Club division, Lake Zurich-based Rolling Thunder 18 Blue went 11-2 and finished 10th overall after losing to Premier Onitsuka out of Maumee, Ohio, 25-17, 25-19 in the consolation finals.

Rolling Thunder 18 Blue team members are 5-11 outside hitter Catherine Hickey from St. Viator; Emily Bringer, a 5-6 outside hitter from Grant; Riley Cross, a 5-6 libero from Buffalo Grove; and Kylie Dykgraaf, a 5-9 setter from Lake Zurich.

Rounding out the roster are 5-3 defensive specialist Jane Sakowicz from Wauconda and 5-10 setter Margaret Streckert from Buffalo Grove.

Also Sunday, 1st Alliance 17 Onyx went 11-2 and finished second in the 17 Classic division, reaching the championship match before falling to ProLink 17 Black out of Athens, Georgia, 26-24, 25-23.

New Wave’s Nina Crawford, a 5-10 middle blocker from Glenbard West, was named MVP of the tournament and was joined on the All-American team by teammates Sarah Hornacek of Lyons Township and Kasey Pfister, a 5-11 outside hitter from Chicago Christian.

Other Illinois players who were named All-Americans on Sunday include Claire Byrne of SPVB 18 White, SPVB 18 Blue’s Hannah Yaconis and Maria Mayhew, and Natalie Gaszynski of Sky High Adidas 16 White.

The part about Sports Performance 18 Navy winning 18 Classic is right under the second set of photos. I think you missed that. As for SPVB 18 White and Blue, their All-Americans are mentioned at the end of the story.