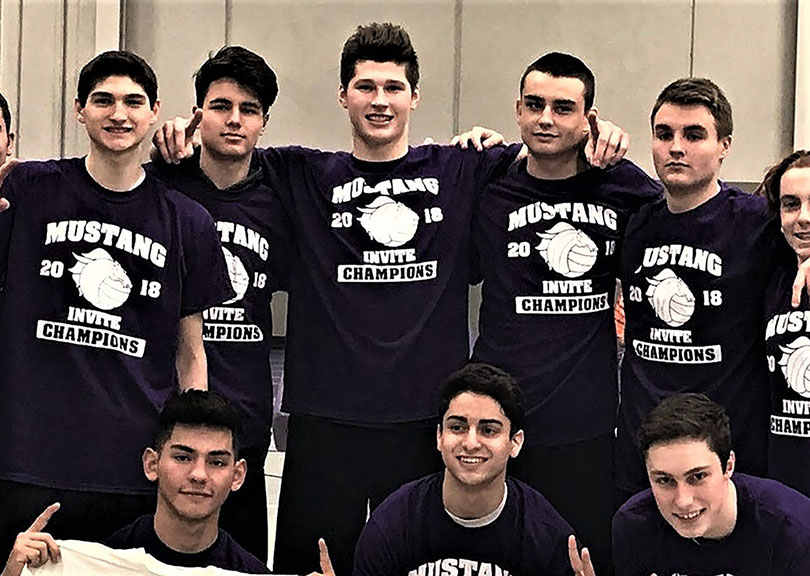 Where would Addison Trail have been without Jacob Grygo?

The 6-foot-5 senior setter did it all for the Trail Blazers – setting hitting, digging, blocking, selling concessions, hawking programs in the stands. OK, maybe not the last two. But the 2018 Illprepvb.com Player of the Year defined the word “all-around volleyball player.”

“This guy is undoubtedly the Most Valuable Player on any team,” Addison Trail coach Chad Grant said. “We really only won four matches comfortably and lost once badly, so all of our matches were competitive and there was a very fine line between winning and losing for us.

“We were able to come out on top, more often than not, because of Jacob,” the coach added.

Grygo, who is headed to Aquinas College (Grand Rapids, Michigan) in the fall, carried Addison Trail to a 26-11 record this spring. He dished out 767 assists for a team that lost one of its best hitters for 25 matches. He led the Blazers with 278 kills and added 117 digs, 48 blocks and 24 aces.

“Jacob forced all six guys on the other team to play defense on him,” Grant said. “He turned what would be terrible overpasses on other teams into easy points for us. He carried us for the last three years.

“The sum of our team was definitely greater than the parts, and that was because of Jacob,” Grant said. “Jacob lifts up every player around him.”

You don’t have to imagine, because those five players join Grygo on the 2018 Illprepvb.com Boys’ All-State Volleyball First Team.

Martinski showcased his skills for the final time as a high school player last week in a sectional final against three-time defending state champion Glenbard West. He had 15 kills in a 18-25, 25-19, 25-18 loss to the Hilltoppers.

“Nick is one of the best players in the state,” Lake Park coach Brian Fisher said. “He is a four-year varsity player who can play any position of the court, and has been a huge reason for our program’s success over the years.”

A high ankle sprain kept Grove out of the lineup for more than two dozen matches this spring, but the lanky outside hitter still managed to amass 313 kills, 38 blocks, 31 aces and 82 digs for the 31-7 state quarterfinalist.

Stevens posted some impressive numbers for Libertyville, which finished 33-6 with three of those losses coming at the hands of state quarterfinalist Barrington. The 6-3 outside hitter had 312 kills (hitting a staggering .459), 30 aces, 52 blocks and 44 digs for the Wildcats.

Marist was ranked No. 1 for a good part of the season, and much of that was due to Jepsen, the only junior on the first team. Jepsen was one of the most feared attackers in the state despite yielding several inches to blockers waiting for him on the other side of the net.

Rounding out the first team is O’Toole, who finished his senior campaign with 409 kills, 31 blocks, 41 aces and 211 digs. The 6-6 senior had 15 kills in back-to-back matches against Glenbard West and Libertyville to lead the Broncos to the Northside Classic title in Winnetka.

“Mike is an elite server, receiver, defender and attacker,” Barrington coach Rob Ridenour said. “There are so many inspiring stories about Mike from how he was an undersized outside on JV to how he mentors younger players, but more than anything, the coaching staff is going to miss his humble to approach to volleyball and life.”

The second team is led by Willowbrook’s 6-3 senior setter Nick Cookingham, who is joined by Plainfield East’s 6-4 senior outside and Dominican University recruit Trey Cowan and 6-5 outside hitter John Davis of Naperville Central (379 kills, 40 aces, 145 digs).

Also named to the third team are Brother Rice banger Kyle Springer and three-sport standout Johnny O’Shea of Palatine, who is headed to Butler in the fall to play Division I football.

“Johnny is the most special player, competitor, athlete and person I have ever coached,” Palatine’s Frank C. Stark said.

Joining them of the fourth team are Mid-Suburban East Player of the Year Jake Mailloux of Hersey and junior outside hitter Jack Yurkanin of Lincoln-Way Central (347 kills, 55 aces, 29 blocks).

“Jake carried us to the state finals last year, and was instrumental to our 20-0 run in the MSL East and our 63-15 record over the last two years,” Hersey coach Nancy Lill said.