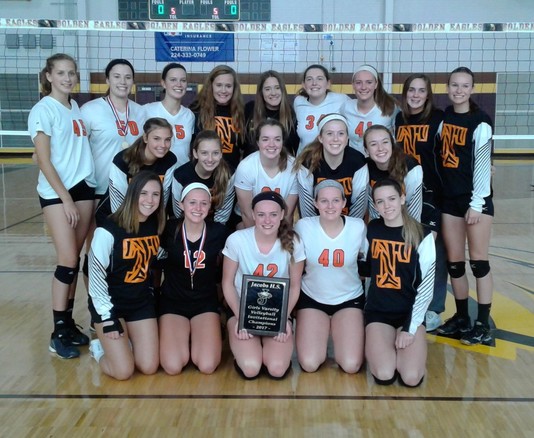 Crystal Lake Central will have to beat New Trier if the Tigers want to make their first trip to the state finals since 2009.

If the Indians are going to avenge those two losses, they will have to start Friday at 7:00 p.m. when they renew acquaintance with Edwardsville (31-5) in a Class 4A supersectional at Normal Community West.

The second meeting between Edwardsville and Minooka (37-2) was a far cry from the 25-18, 25-19 beatdown the Indians handed the Tigers at the St. Charles East Scholastic Cup.  Edwardsville took down the defending state runner-up 25-22, 28-26 in their rematch.

“Edwardsville dug the crap out of us,” Minooka coach Carrie Prosek said. “They did awesome. The first time we played them, we just hit all our shots. The second time, they started digging us and my girls started making hitting errors. Edwardsville dug us and killed us on their offense by tipping.”

Edwardsville also has one advantage that Benet did not have during its 25-20, 25-20 loss to Minooka in the sectional finals at Waubonsie Valley – size.

Benet, with only one starter over 6-foot, tried to adjust its back end defense to  slow down the Minooka attack.

“We played a completely different defense than we did all year trying to get to different spots and cover all the angles,” Benet coach Brad Baker said. “We gave kids like our libero (sophomore Hattie Monson) and our middle backs free releases in the hopes that we get deep enough and maybe get on some of those balls.”

Despite the changes, Benet could only watch as Minooka launched shot after shot over its block.

“Their (Minooka’s) balls are coming so fast and such tempo that we could not get to where we needed to dig those balls,” Baker said.  “They were hitting over our kids. We sided out at a pretty good rate, but their rate was great.”

Meanwhile, Minooka is also dealing with the pressure of a lineup that features all seniors save setter Zoey Seput and a second-place finish on its resume from 2016.

“This group has a lot more pressure than other teams because obviously everybody’s expecting something,” Prosek added. “We don’t talk about that. I tell them not to read the papers, just go out and play the match that we have that day, play for themselves and for the team.”

“Our ultimate goal is to go to state, but when the team has as much pressure as this one I don’t want them reading and feeding off of everything,” she added. “We just need to worry about playing our game and not worry about what everyone else is doing.”

Here is a brief look at the other Class 4A supersectionals (in bracket order) Friday.

At Geneva
St. Charles North (36-3) vs. Downers Grove North (27-12), 6:00 p.m.
This is a rematch of a match won by Downers Grove North 19-25, 25-21, 25-22 in a gold bracket quarterfinal of the Wheaton Classic back on September 16. Six-foot-1 outside hitter Clare Delaplane led the Trojans in that match with 11 kills and 6-foot junior Margaret Mahlke added 9 kills. Downers Grove North’s record is misleading. The Trojans have played one of the toughest schedules in the state  with matches against Mother McAuley, Marian Catholic, Benet, Marist, Sandburg, Joliet Catholic and St. Francis. Junior rightside Katie Lanz is St. Charles North’s top weapon with 274 kills and 87 aces on the season. Senior Abby Graham has added a little more than 200 kills while junior gives Lindsey Hawkins’ crew a solid third option.

At Lake Zurich
Crystal Lake Central (32-3) vs. New Trier (34-5), 6:00 p.m.
You have to feel that a strong Fox Valley conference schedule that included matches again Prairie Ridge, Huntley and Cary-Grove and non-conference matches against Minooka and Wheaton North gives Crystal Lake Central a slight edge here. The Tigers have size in sophomore Camryn Hauser (6-foot), 6-foot sophomore Madde Blake, 6-1 freshman Madeline Timmerman and the Kelly twins – Megan (6-foot) and Emily (5-11) – and chemistry. Megan Kelly is a two-way threat at both setter and opposite. New Trier, which rarely strays from the northern suburbs during the regular season, defeated Hersey 21-25, 25-12, 25-17 in the sectional final on its home court n Winnetka. The Trevians got 12 kills from 6-foot-1 junior middle hitter Gillian Klise in that match.
At Mother McAuley
Mother McAuley (35-4) vs. Marist (38-1), 7:00 p.m.
The only blemish on Marist’s record is a 25-20, 25-17 loss to McAuley on the Mighty Macs’ home floor back on September 12. Marist is led by 5-10 outside hitter Savannah Thompson, 6-foot sophomore Camryn Hannah, 5-9 middle blocker Katie Hogan and 6-foot setter Molly Murrihy.  McAuley counters with Gatorade Player of the Year candidate Charley Niego (456 kills), 5-10 sophomore rightside Amia Owolabi, 5-9 sophomore Alena Pedrozza and setter Nancy Kane. McAuley is the defending state and national champion and has won 15 in a row since a surprising 25-18, 25-22 loss to Joliet Catholic in the semifinals of the Asics Challenge back on September 30. Can the Mighty Macs parlay a raucous home court advantage into an upset of the No. 1-ranked RedHawks? Can Marist overcome the McAuley mystique? The winner will be favored to meet Minooka in the state championship match on November 11.