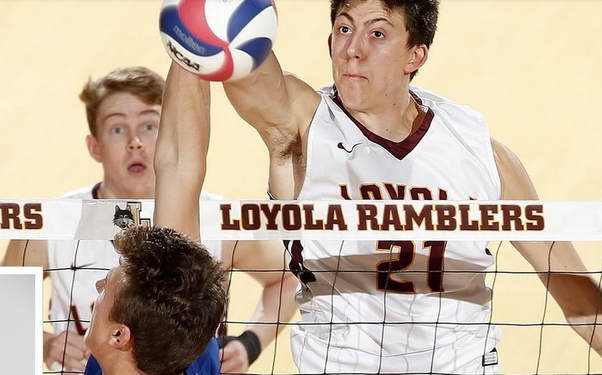 Although his sisters Jessica and Jenna were neck-deep in volleyball while he was growing up, Jeff Jendryk had no interest in the sport. A gangly 6-foot-1 freshman when he walked into the door of St. Francis High School in Wheaton, he wanted to play basketball.

The 6-foot-10 middle blocker is on his way to becoming Loyola University’s first four-time All-American in volleyball, won a national championship and was named the NCAA tournament’s most valuable player as a freshman, and when his college career is over, will suit up for the U.S. Men’s National Team.

Jendryk started all 30 matches for the Ramblers, and recorded career highs in kills (17) and blocks (9) in Loyola’s NCAA championship victory over Lewis.

“That was just an awesome experience,” he said. “Especially coming as a freshman, experiencing college, then the team becoming national champions. It was just a great experience. My college experience started at a peak.”

Two years ago, Jendryk was named an AVCA Second Team All-America honoree for the second straight year, a First Team All-MIVA selection, played for Team USA at the Pan American Cup, and led the Ramblers with 278 kills and was second with a .431 hitting percentage.

He had 13 matches with 10 or more kills and collected double-digit kills in nine of the final 10 matches of the season.

“That was a great experience … reaching that level,” Jendryk said of making the Pan American Cup team. “I used that experience to motivate myself to become a better player.”

“The guys (on the FIVB World League roster) knew so much more about volleyball than I did at the time,” Jendryk said. “My volleyball IQ has skyrocketed since then. They would give me all this information that I really didn’t know. Now I can tell my (Loyola) teammates and it really helps the team out.”

Jeff Sr., who was cut from his junior high school basketball team in eighth grade, laid the foundation for his son’s success when he took Jessica kicking and screaming to a club tryout when she was a 6-foot seventh grader. He didn’t stick around for the tryout, and when he returned, he fully expected Jessica to get cut.

A few years later, she was one the leading attackers on the first Benet team to get downstate in 2008. The Redwings finished second that year and Jessica eventually found her way to Illinois, where she was part of the Illini’s 2011 national runner-up. She also played one year at St. Louis University while earning a master’s degree.

Jenna’s volleyball future was more assured. Arguably the best athlete in the family, Jeff Sr. said that his youngest daughter would run through walls to become the best volleyball player she could be. A three-year starter for Sports Performance’s 18 Elite team, Jenna led Benet in kills when it won its first state title in 2011.

“I can still remember being a 16-year-old going to my first volleyball camp,” Jeff Jr. said. “It was me and three other dudes and 160 girls. I felt so awkward. After that first week and first couple of practices, I didn’t really know if I liked it.

“But my sisters really helped me out,” he added. “After watching them play, I was able to pick up on a lot of things those first couple weeks of playing volleyball. They still really support me. They’re excited to see how I’ve grown.

“Sometimes, they get a little jealous,” Jendryk said. “But they love it. I am really appreciative of them. I would not be where I’m at without them.”

Today, Jessica works for Morgan Stanley, is one of the top beach volleyball players in Illinois, and coaches both boys and girls at Sports Performance Volleyball Cub in Aurora. Jenna is a traffic manager for JB Hunt.

“I told Jenna that while Jessica was part of an NCAA final team and Jeff won a national championship at Loyola, she did one thing that they never did,” Jeff Sr. said. “She won a state championship.”

And helped to lay the groundwork for one of the most successful men’s volleyball players Illinois has ever produced.

And he’s not done yet.

Loyola (7-2) has won five in a row and moved up to No. 6 in the latest American Volleyball Coaches Association (AVCA) Division I-II Poll, which was released this week. The No. 6 ranking is the highest of the season for the Ramblers. Jendryk is on pace to become the school’s first four-time All-American.

“We’re definitely going in the right direction,” Jendryk said. “Our intensity level has dramatically changed since last year. We have the perfect amount of experience and new guys. The season is looking really good. I’m happy and I’m excited where this season is going to go.”

“I’ll be really happy, really stoked to having my family watch me play against these top countries in the world,” he said. “I’ll probably see some my friends and it’s going to be really cool for them to see how a 16-year-old who never played volleyball before is now playing with the U.S. national team.”

Jendryk’s goal is to play professionally overseas, and perhaps parlay that experience with a degree in Finance from Loyola into a successful career in financial management.

“I’m really interested in the stock market,” he said. “But people are paying people to manage their money. My goal is to invest my own money so I don’t have to pay somebody else to manage it.”

And whatever the future holds, he always knows where he can turn for help.

“Jessica is working toward becoming a financial advisor for professional athletes,” Jendryk said. “Hopefully, she can give me more intell like she did in the past.”