Skip to content
You are here
Home > Stories > Kane County 18 Gold as good as … well, gold 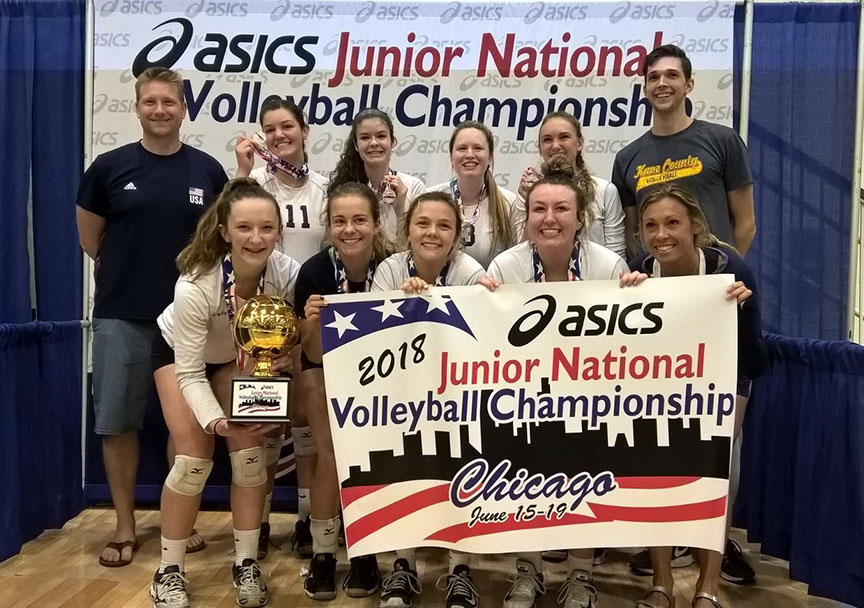 KC Johnsen has been coaching volleyball for a long time, but he might never have had a group as resilient as this season’s Kane County 18 Gold team.

Minus one of the two seniors on the team and with a roster featuring two sophomores and five juniors, Kane County 18 Gold won the 18 Open division at the 2018 Asics National Jr. Volleyball Championships June 15-19 at Navy Pier.

“I’m really proud of this group of kids and how resilient they were,” said Johnsen, who founded Kane County Juniors 20 years ago and coached at Geneva for 13 years. “They approached this whole season with an attitude of, ‘We just got to get better. We got to keep progressing.’”

Kane County 18 Gold took a few lumps on its way to winning the Asics title. The team finished 14-10 and in 24th place in the Great Lakes 18s Power League and 3-5 and 13th of 26 teams in the 18 Club division at the National Junior Classic.

“We knew they were going to be young, so we kept hammering home the message, ‘Lets work on the process and the outcome will take care of itself,’” Johnsen said. “It worked out that way because they were playing really well that last day at Navy Pier.

“It feels good when it comes true,” Johnsen said. “You hate to be wrong about something like that.”

Kane County 18 Gold opened the Asics Challenge with three consecutive wins, then dropped two of its next three matches including a 25-22, 20-25, 16-14 setback against FCV 18 Elite out of Bourbonnais, Illinois.

“I really like the makeup of these kids,” Johnsen said. “They didn’t freak out, they didn’t shut down after they lost a couple of times. Fortunately, they were able to stay in the Gold division and get another shot. They were able to keep going.

“You don’t always get that opportunity in those big tournaments,” he added. “You lose once on the first day or get into the wrong kind of tiebreaker, and you could be knocked out of the gold on the first day.”

“I’ve been coaching girls volleyball for a long time, and if you can get a group of kids to that point where they take a couple of tough things and stay resilient, then you’re really dealing with something special,” Johnsen said.

The 2018 Asics National Jr. Volleyball Championships did not name an all-tournament team or an MVP, but if it had, it’s hard to imagine there would have been another player considered for the honor than Kane County 18 Gold 5-9 junior setter Calli Gentry from St. Charles East.

“Everywhere we go, I get compliments like, ‘Man, I like your setter,’ or ‘I like that kid,’” Johnsen said. “She’s such a great competitor, a great leader and athletic as all get out. I think she’s going to find a place to play in college.”

Gentry is unlikely to get much playing time at setter for St. Charles East this fall, however. The Saints already have a pretty good setter in 6-foot McKenna Slavik, who guided SPVB 18 Elite to an AAU national title in Orlando, Florida.

“She (Gentry) says that she knows she’d better be ready to play libero or a small outside hitter,” Johnsen said. “She got such a great attitude. I’d find a way to keep Calli on the court.”

“There were so many seniors on that team (St. Charles North) last year she didn’t play much,” Johnsen said. “I coached at Geneva for 13 years and we averaged 28-29 wins a year, and there weren’t many years we couldn’t have used a leftside like Makayla. Probably every one of them.

“She’s a nice player,” he added. “There aren’t that many kids around playing JV who jumps quite as high as she does.”

Rounding out the eight-player roster which brought home the gold from Navy Pier are Nikole Custer, a 5-6 sophomore defensive specialist from St. Charles North; Emma Davine, a 6-foot junior middle hitter from Geneva; and Anna Friedlund, a 6-foot senior middle/outside hitter from DeKalb.