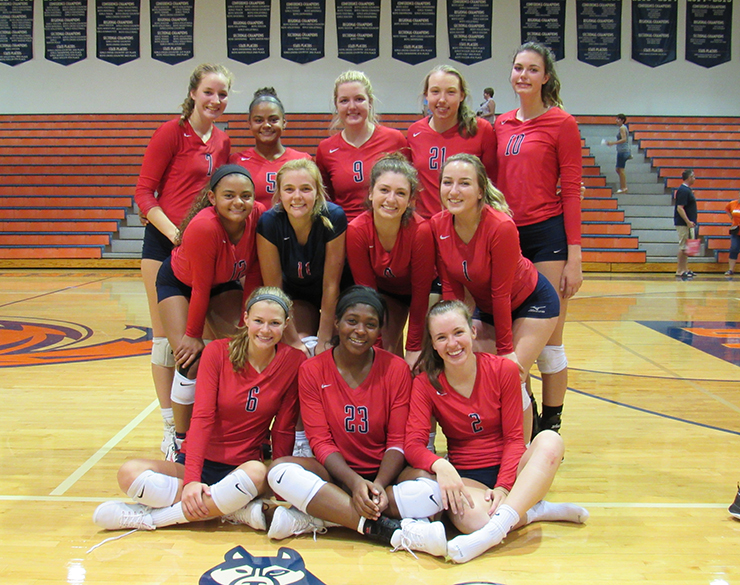 West Aurora was just a few points from handing Naperville North only its second loss this season Thursday.

Naperville North’s 5-foot-10 senior outside hitter Sarah Kushner and her younger sister, 5-6 freshman Ashley, a defensive specialist for the varsity Huskies, will have a lot to talk about on the way home tonight.

“I drive her home,” Sarah said. “So we talk about … we either say, ‘You did really bad or you did pretty good.’ We can be pretty honest with each other.”

The sisters should have a lot of nice things to say to each other following Thursday’s effort against visiting West Aurora. Sarah had 13 kills, 9 digs and 3 aces, and Ashley was a steady force in the back row as the Huskies defeated the Blackhawks 25-23, 17-25, 25-20.

It was Naperville North’s second win over West Aurora this season. The two teams met earlier at the Wheaton North tournament. The Huskies also won that match in three sets.

“We knew going in they were going to be our toughest game of the year,” Sarah Kushner said. “We see them every year and we played them before. We knew they were super scrappy and had some really good hitters.

“We saw what their tendencies were,” she added. “We tried to attack their weaknesses and we tried out-dig them because they have some really good hitters. As long as we kept digging them and kept the ball in play, it gave us more opportunities to score.”

Naperville North (9-1) broke out to an early lead in Game 1, but found itself trailing 21-17 after a kill by West Aurora’s 5-8 junior Olivia McPherson. The Huskies rallied to tie the set at 22-22 on a kill by Kayla Griesbach before a Molly Russell ace and Linnea Dale kill closed out the game.

“We had an opportunity to get a win in that game,” West Aurora coach Kevin Mortlock said. “We were ahead a couple of points. They have great hitters and a really smart defense. They just battled through and they won that game.

“Luckily, we started a little warmer in that second game, kept the pressure on them and finished strong,” he added. “It was just unfortunate that we were fighting from behind in the third game.”

Thanks to 6-1 junior Kendra Battle and 6-2 sophomore Chloey Myers, West Aurora (11-5) closed Game 2 on a 7-1 run to force a third game. But a Sarah Kushner kill gave Naperville North an early 13-9 lead and West Aurora never got closer than 2 points the rest of the way.

“It could have gone either way,” Mortlock said. “No. 15 (Dale) on the slide is a really tough one to block, and their setter (Grace Selman) did a great job mixing the ball up and keeping us on our toes. We weren’t really sure where the ball was going.”

Griesbach added 9 kills for the Huskies, who also got 7 kills from Dale, 5 kills from 6-foot sophomore middle hitter Ellie Hall, 19 digs from Russell and 34 assists from Selman.

“A lot of my teammates really stepped up tonight, especially Linnea Dale,” Sarah Kushner said. “She put some hard balls down, Molly had a bunch of digs and Grace was setting great balls. We really came together in that last game and played as a team. I think it showed.”

Sarah Kushner, who has been playing varsity all four years at Naperville North, said it’s too early to tell just how good this year’s team can be.

“It definitely has so much potential,” she said. “Everyone is working hard every day in practice. We never take a day off. I’m really excited for this season.”

And she gets to spend it with her younger sister, too.

Other than the fact that Ashley’s not old enough to drive her sister home.