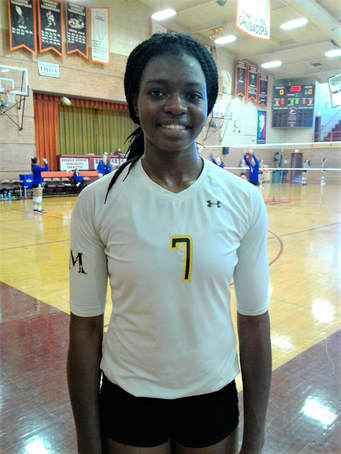 But she choose to concentrate on volleyball for a number of reasons. One in particular.

“Well, there’s no running,” she said.

Thomas-Ailara began playing volleyball at age 9. She joined the Diamond Elite Volleyball Club in Hobart, Indiana, at age 11, and has been dominating high school and club opponents ever since.

“I was really athletic as a kid so I played a lot of different sports,” Thomas-Ailara said. “That’s when my mom’s friend said, ‘She’s tall. You should try to get her to play volleyball.’ I tried it and I really liked it.

“It’s so many different skills,” she added. “It’s so skill-based. I really like that you have to have all these different skill sets to play, more so than other sports. That’s what I like.”

St. Charles East coach Jennie Kull saw firsthand the impact Thomas-Ailara has on the volleyball court when Marian Catholic rallied from a 22-18 deficit in the third game to defeat the Saints 25-18, 25-27, 25-23 Saturday at the Asics Challenge.

“She’s dynamic,” Kull said. “She’s as close to a college-level player that we’ve seen this year. She can pass, she serves aggressively, she jumps. She still has some more work to do, but she’s phenomenal. She’s fantastic.

“I’ve watched a lot of college games lately and that’s a kid who could step in right now and do some damage for some teams immediately,” Kull added.

Big Ten volleyball fans will see a lot of Thomas-Ailara in the future. She committed to Northwestern in April.

“I really like the coaches,” she said. “They’re amazing. The atmosphere is really nice and so are the other players and recruits.”

Thomas-Ailara may be all business on the court, but she does have a softer side.

“She’s super sweet,” Summer said. “Very nice and mild mannered. On the court she gets a lot more heated up. She gets a lot more fire and turns into a different person. I absolutely love to coach her and would rather coach her than coach against her.”

When she’s not putting up big numbers on the court, Thomas-Ailara spends time with family and friends and sings in the church choir at Trinity Lutheran Church in Lansing.

“I like to hang out with my friends and go out to the movies and stuff,” she said. “I like to sing. I’m in the choir at school. I sang at grammar school. I don’t try to emulate anybody, but I do like  slower songs, some Beyoncé and popular music artists. I listen to them when I’m on the bus and I want to relax.”

There is one more activity on which Thomas-Ailara focuses that’s a little less pleasant.