Skip to content
You are here
Home > Stories > Marist, Minooka eye Class 4A title showdown; will Althoff prevail in 3A? 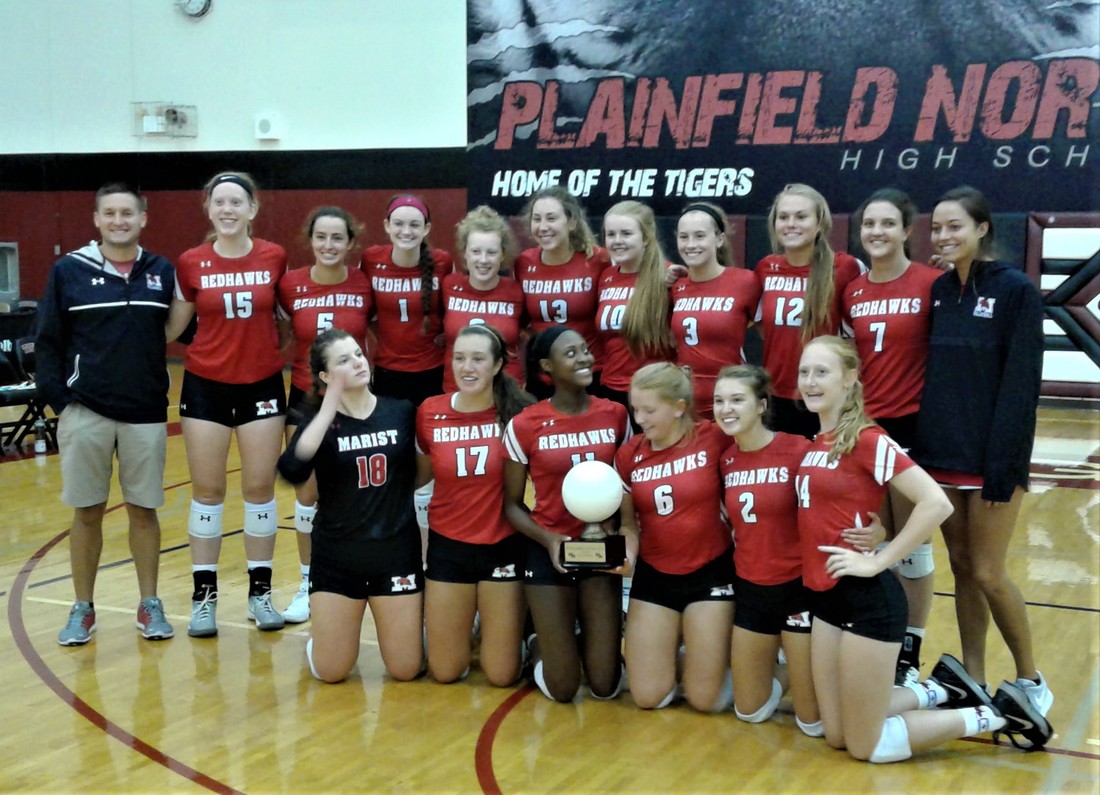 Will Marist defend its No. 1 ranking or will Minooka avenge its loss at Plainfield North?

August 26. Seemingly an eternity ago.

Two-and-a-half months ago, Marist and Minooka met in the championship match of the Plainfield North tournament. Minooka used a 13-7 run to break a 6-6 tie in Game 1 and breezed to a 25-20 win. A tournament title and statement victory seemed inevitable.

But a funny thing happened on the Indians’ way to claiming the championship plaque.

The two teams are heavily favored to meet again this weekend for the Class 4A state title at Redbird Arena on the campus of Illinois State University in Normal..

Marist (39-1) is coming off a revenge win over Mother McAuley – the only team to defeat the RedHawks this season — in the supersectional on the Mighty Macs’ home floor, while Minooka (38-2) avenged its only other loss by beating Edwardsville at Normal West.

“It was an exciting week for us capped off with a big win on Friday night to earn our spot at state,” said Marist coach Jordan Vidovic. “We felt very prepared and executed our game plan throughout led by our seniors who refused to lose that game. The win was a product of a lot of hard work and dedication that goes a lot further back than this season.”

Much like it has been all season, Marist is led by 6-foot-1 Memphis recruit Molly Murrihy, outside hitter Savannah Thompson and sensational 6-1 sophomore Camryn Jordan. But the RedHawks have not stood pat since late August.

“We’ve been adding elements in practice week by week and have gained valuable experience through the top-level schedule we have played,” Vidovic said. “We have been battle-tested and feel prepared for any situation this weekend.”

Few teams have played the schedule that Marist has. But Minooka has not exactly been beating patsies, either, with wins over Geneva, Sandburg, Joliet Catholic, Benet (twice) and fellow final four qualifier Crystal Lake Central in the finals of the Mother McAuley Preview.

Led by 6-1 outside hitter Alli Papesh, 6-foot outside Rocky Perinar and libero Taylor Baranski and with all but one starter back from last year’s state runner-up, the Indians have performed under the microscope all season.

“Our message has always been about character, consistency and competing for the betterment of the person next to you rather than competing only for yourself,” said Minooka coach Carrie Prosek. “This year, we have added another mantra – ownership.

“Owning our victories and giving credit where it is due, owning our losses and errors and learning from those matches, and owning the effort and competitive attitude needed for tough practices and matches,” the coach added.

Although Marist and Minooka seemed destined to meet for the title late Saturday night, don’t expect Crystal Lake Central (32-3) or St. Charles North (37-3) to wilt under the glare of the bright lights and spacious confines of Redbird Arena.

“This is an extremely special group and we are thrilled that we get to spend one more week together, doing what we’ve been doing the entire season … striving to be the best team we can be,” said St. Charles North coach Lindsey Hawkins.

“We know that the competition this weekend is fierce, but we have been saying all along that the road to state is never easy and we wouldn’t want it any other way,” Hawkins said. “We are looking forward to facing off with some of the very best competition in the state.”

Crystal Lake Central is also making its first foray in the 4A field, having won it all in 3A in 2007 and finishing fourth in 2009 under the late Doug Blundy. The Tigers have the size and talent to make some noise this weekend.

“We know it’s going to be a very tough weekend as there are some great teams,” said Crystal Lake Central coach Lisa Brunstrum. “We’ve really focused on one match at a time, and this team has worked to improve every time they get to take the court together, whether it is at practice or in a match.”

“They are excited to get to play two more matches together as a team,” Brunstrum said.

Here is a quick look at this weekend’s state finals:

Class 4A
St. Charles North (37-3) vs. Minooka (38-2), 7:00 p.m.
Marist (39-1) vs. Crystal Lake Central (32-3), 8:30 p.m.
Favorite: Marist
Darkhorse: Minooka
Outlook: Minooka is not really a darkhorse. With five starters back from last year’s state runner-up, in any other year they might have been an odds-on favorite. But Marist has been virtually unbeatable this season and Vidovic, a record-breaking setter who guided Brother Rice to a fourth-place finish on the boys side in 2004 (the same year Matt McCarthy and Doug Burchett led Wheaton Warrenville South to a 40-0 record), is a master tactician. The wildcard for the RedHawks is Hannah, who projects to be one of the nation’s top recruits as a setter in 2019-20. The Indians, meanwhile have state experience and motivation after last season’s season-ending loss to Mother McAuley. “The goal for this team has been to leave a legacy, and their goal was to return to Redbird Arena at Illinois State,” Prosek said.  “So what lies ahead this weekend for the Indians is hard work, ownership, the goal of remaining consistent, having each other’s backs and having fun.”

Class 3A
St. Viator (29-11) vs. Resurrection (31-8), 4:00 p.m.
Normal U-High (28-10) vs. Belleville Althoff (39-1), 5:30 p.m.
Favorite: Belleville Althoff
Darkhorse: St. Viator
Outlook: Belleville Althoff has been among the state’s best this season regardless of class, and it’s hard to imagine the Crusaders getting derailed here. Five-foot-11 setter Louise Comerford (791 assists, 43 aces, 182 digs, 124 kills) is the one who makes it all happen for Althoff. She feeds the likes of 6-foot sophomore Karinna Gall (293 kills), 5-9 senior Addie Burris (221 kills) and 5-6 sophomore Katie Wemhoener (214). St. Viator should benefit from a brutal schedule that includes East Suburban Catholic Conference foes Marian Catholic, Benet, Joliet Catholic and Marist. The Lions are powered by 5-11 outside hitter Catherine Hickey’s 533 kills including a season-best 26 in a three-set win over Carmel and 21 in St. Viator’s supersectional win over Limestone. Five-foot-10 junior Kate Notoli is next with 199 kills. Five-foot-9 senior Brittany Welch powers the Bandits of Resurrection, who overwhelmed Latin 25-16, 25-15 in the supersectional.

Class 1A
Newark (34-3) vs. Payson Seymour (39-1), 9:00 a.m.
Durand (34-1-1) vs. Stewardson-Strasburg (33-6), 10:30 a.m.
Favorite: Payson Seymour
Darkhorse: Durand
Outlook: Newark set a school record for wins in a season (34) and qualified for the state finals for the first time in program history with its 25-20, 22-25, 25-19 win over Lexington in Friday’s supersectional at Serena. Freshman Madi Malone led Newark with had 18 kills, 16 digs and 3 blocks, sophomore Mattie Chapman added 7 kills and 5 blocks, and setter Olivia Nelson had 24 assists and 7 digs. But if Newark is the Cinderella story of the tournament, then Payson Seymour is the big bad wolf. The Indians needed just 38 minutes to crush Steeleville 25-12, 25-10 in their supersectional Friday, serving up 9 aces along the way. Payson Seymour has been ranked among the state’s top small-school teams all season, and when previously unbeaten Kewanee Wethersfield went down in the sectional, the path to the state title was cleared.