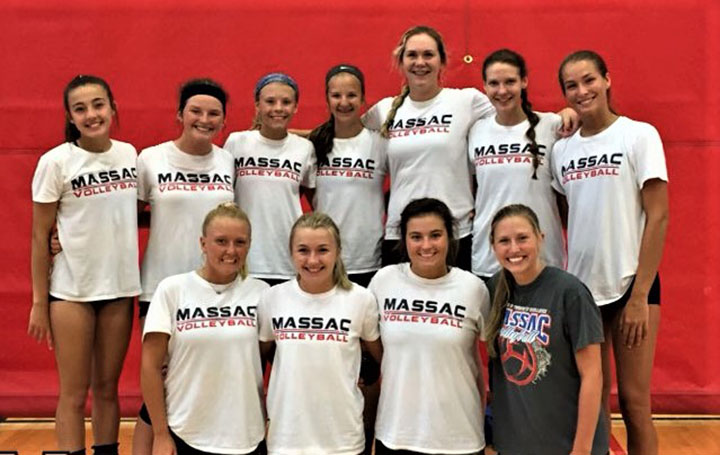 Massac County is seeking its fifth regional title in the past six years.

Illprepvb.com continues its coverage of the 2018 Illinois girls high school season with another set of team previews.

School: Elgin Larkin
Conference: Upstate Eight
Head coach: Henry Graack
Last season’s highlights: 0-32 overall, 0-6 in conference, lost 25-8, 25-9 to Kaneland in a Class 4A regional quarterfinal.
Top returnees: 6-1 senior middle hitter Mallory Boulton (84 kills, 14 blocks, 40 digs, 18 aces), 5-6 senior setter Amber Allen (50 kills, 123 assists, 11 blocks, 58 digs, 29 aces), 5-5 senior outside hitter/libero Kitzia Tinajero (47 kills, 8 blocks, 118 digs, 25 aces), 5-7 sophomore outside hitter Alexia Saldivar (38 kills, 81 digs, 15 aces).
Top newcomers: 6-1 junior rightside hitter Olivia Warren, 5-6 sophomore outside hitter Lauren Anliker.
Coach’s quote: “Last year was a rough rebuilding year. We had one senior and only won two sets. We are still small, young and lack experience, but return all but two players (the graduated Claribel Hernandez and a transfer). With St. Charles, Geneva and Batavia out of our conference, now we should be more competitive. I believe we will have a lot of close games. Hopefully, we can come out on top in them.”
Outlook: The Upstate Eight has a new look this year, going from two divisions of 13 schools to one division of 10 schools with the departure of perennial volleyball powers St. Charles East, St. Charles North, Batavia and Geneva and the addition of Glenbard South. Larkin should fare better in the new alignment, but West Aurora, Glenbard East and Glenbard South will still be formidable foes for the young Royals.

School: Massac County
Conference: Southern Illinois River-to-River (Ohio)
Head coach: Zach Miller (13th season)
Last season’s highlights: 30-8 overall, 7-3 in conference, won the 12-team River-to-River Conference Tournament for the third straight season, won the 16-team Fairfield Invitational for the fourth time in five seasons, won fourth regional in last five seasons upsetting top-seeded Marion, lost 25-10, 25-17 to Breese Mater Dei in a Class 3A sectional semifinal.
Top returnees: 5-7 senior libero Brooke Stepter (660 digs in 2017), 5-11 senior middle hitter Becca Jackson, 5-11 junior outside hitter Jessie Lewis (team leader in kills), 5-6 senior setter Bailey Duckworth.
Top newcomers: 6-3 sophomore middle hitter Cali McCraw, 5-7 sophomore outside hitter Madison Hammonds, 5-8 sophomore defensive specialist Sydney Wilke, 5-7 sophomore outside hitter Jenna Bunting.
Coach’s quote: “We had a fantastic summer and competed in numerous tournaments. It gave us a chance to develop the team chemistry that is so necessary in volleyball. Our offensive speed of attack is not where it needs to be though, so that will be a big focus come August. I’m very excited to see our girls take their talents around Southern Illinois. I know they will represent Massac County with excellence.”
Outlook: Massac County must replace four-year starting setter and all-world selection Ellie Weber, but the team’s fortunes will rise or fall with rightside hitters Jenna Bunting and Macy Pierce.  If they develop the ability to hit with consistency and block effectively, Massac County will be a very tough team to beat.
Did you know? All five Massac County seniors have achieved “Academic Excellence” and have been selected to the National Honor Society at Massac County.

School: Peoria H.S.
Conference: Big Twelve
Head coach: Amy Adamow
Last season’s highlights: 4-24 overall, 1-10 in conference, lost 25-6, 25-13 to Ottawa in a Class 3A regional quarterfinal.
Top returnees: 5-7 senior setter Kiara Beavers (21 aces, 140 assists).
Top newcomers: 5-5 junior outside hitter Derria Edwards, 5-7 senior outside hitter/defensive specialist Cassidy Jones.
Coach’s quote: “We will be young this season, but the girls have been putting in hard work over the summer. They are a dedicated group, always striving to be better, and have formed a strong bond.“
Did you know? Kiara Beavers attended Peoria Christian for the first two years of her high school career, transferred to Peoria her junior season and was an instant leader. “She is very court smart and is always in a good mood,” Adamow said. “The girls look to her for her leadership and knowledge.”

School: Wheeling
Conference: Mid-Suburban East
Head coach: Jason Kopkowski
Last season’s highlights: 20-18 overall, 4-6 in conference, won Round Lake invite, lost 25-17, 25-16 to Schaumburg in a Class 4A regional final.
Top returnees: 5-8 senior outside hitter Kamila Staniszewski, 5-7 senior outside hitter Nicole Nguyen, 5-11 senior middle hitter Rugile Jaciunas, 5-9 senior outside hitter Ellie Welter, 5-11 senior middle hitter Nosa Igiehon, 5-4 senior defensive specialist Lupe Bucio.
Top newcomers: 5-10 junior outside hitter Emily Lacaeyse, 5-7 junior setter Grace Zambrano, 5-5 junior outside hitter/defensive specialist Alexa Ferraro.
Coach’s quote: “We have the majority of our team returning from a 20-win season and the biggest upset in the program’s history beating Loyola in the regional semifinals. The younger players are stepping up and we are finding out a lot about ourselves this summer in camp and in league. The majority of our team also participates in other sports from softball to basketball to track and field.  In addition to attending volleyball camp and summer league, they have also been competing at the highest and most competitive levels in those other sports this summer.  That is a quality of this team that can’t be overlooked … we are competitors and bring a ton of success from other sports as well.”
Did you know, Part I? Kamila Staniszewski is returning from her second ACL injury in as many years. She recovered from her first ACL tear and was named all-conference last season.
Did you know, Part II? “We will have some of the best softball players, basketball players and track and field athletes making up this volleyball team,” Kopkowski said. “I hope that we can prove that you don’t necessarily have to be a one-sport athlete to achieve success at a high level … especially in a skill sport such as volleyball.”