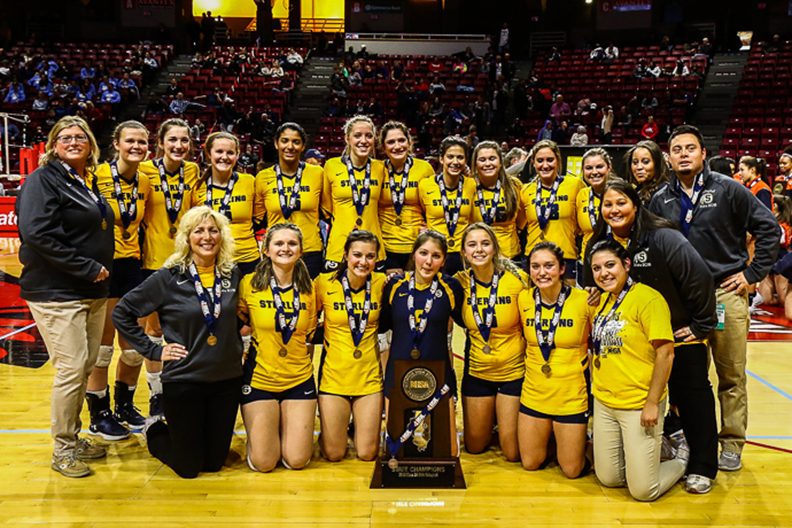 Sterling defeated Belleville Althoff to win the Class 3A championship in its first appearance in the state finals. (Photos by Dave Ruggles)

Early in the season, Sterling sophomore Bree Borum was asked what the team’s goal was this season.

The Golden Warriors held off a charge from defending Class 3A champion Belleville Althoff and emerged with a 25-21, 25-22 victory to capture the Class 3A state championship Saturday at Redbird Arena.

“It feels awesome,” said Sterling coach Dale Dykeman. “It’s great to experience with this group of girls. They stuck with it all season. There are times they loved each other, times they couldn’t stand each other, but when they stepped into that 30-by-30-foot box on their side of the court, they were all business.”

“I’m excited to raise a banner in the gym next to the 1977 team,” senior rightside hitter/setter Josi Borum said. “I wasn’t that nervous (going into the title match). I had a feeling we were going to do this.” 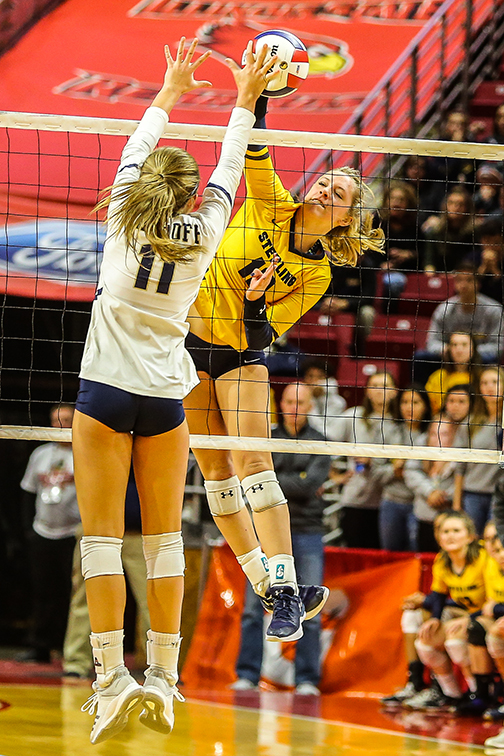 Sterling (41-1) did, but not without a battle from the Crusaders (37-5). Back-to-back kills by junior middle blocker Karinna Gall (match-high 15 kills, 8 digs) gave Althoff a 15-13 lead in the second set. The Golden Warriors, however, came back with a 7-1 spurt that featured a pair of kills by senior middle blocker Gretchen Gould (3 kills, 2 blocks).

Another Gall kill drew the Crusaders to within 21-20. But a Josi Borum kill and a return into the net restored the Sterling advantage to 3 points. Gall banged another kill, but another miss-hit gave the Golden Warriors match point.

A bad pass kept Althoff going for a moment, but Josi Borum bashed the match-winner off a block and let out big “yeah” while pumping her fist before joining her teammates in celebration.

“I was just super excited, and I knew we could do it,” Josi Borum said. “(On the match winner), it was reality setting in. Just to be able to do it for this community, this town, is amazing.”

Once again it was the Borum sisters leading the way for Sterling. Bree Borum (12 kills, 13 assists, 11 digs) had a triple-double out of the rightside/setter position. Her twin sister, Brooklyn (9 kills, 10 digs) was steady again from the outside and Josi Borum (9 kills, 15 assists, 6 digs) led the team in assists.

“We just refocused on the game plan and what we wanted to do on offense,” Dykeman said. “Plus, I don’t know if (Althoff) had seen a defense like ours.”

Trailing 2-1 in the opener, Sterling went on a 10-3 spurt to lead 11-5. The lead grew as large as 19-11 before the Crusaders came back to cut the margin to 23-21 on a Gall kill. But Brooklyn bashed a kill and Josi tipped one over to polish off the first set.

“I think this year we just knew it,” Bree said. “We were locked in, we wanted it and we wanted to do it for our community.”

While the loss was disappointing for Althoff the fact it got back to the title match with a new coach and a lineup that has only two seniors, was an accomplishment.

“This is our third straight year at state,” said Althoff coach Tony Miner. “This group of juniors has already left a huge legacy as they helped us win our first volleyball state title last year. This season was amazing, and I couldn’t be prouder of them. Hats off to Sterling. They’re a great team, but we did a great job of fighting back.”

“I think we played well,” she said. “Sterling was just better. Their offense was amazing.”

Emily Holbrook’s final kill — for Joliet Catholic and likely in her volleyball career – wasn’t the game-winner, but it allowed her to go out on a high note before continuing her college career as a defensive specialist at Arizona State.

Holbrook had 9 kills as the Angels finished third in Class 3A and claimed their ninth state trophy under head coach Chris Scheibe.

Scheibe has never had a player go through her program in her 19 years who has not experienced the state finals at least once.

“When I came to Joliet Catholic 19 years ago, I wanted to build a program, I wanted to be like Mother McAuley,” she said. “I don’t know if I’ve hit that standard, but I wanted to give girls an opportunity to experience state.”

Joliet Catholic (28-14) also got 8 kills and 15 digs from 6-0 sophomore outside hitter Jillian Gray and 24 assists from 5-9- sophomore setter Ryan Hinshaw. 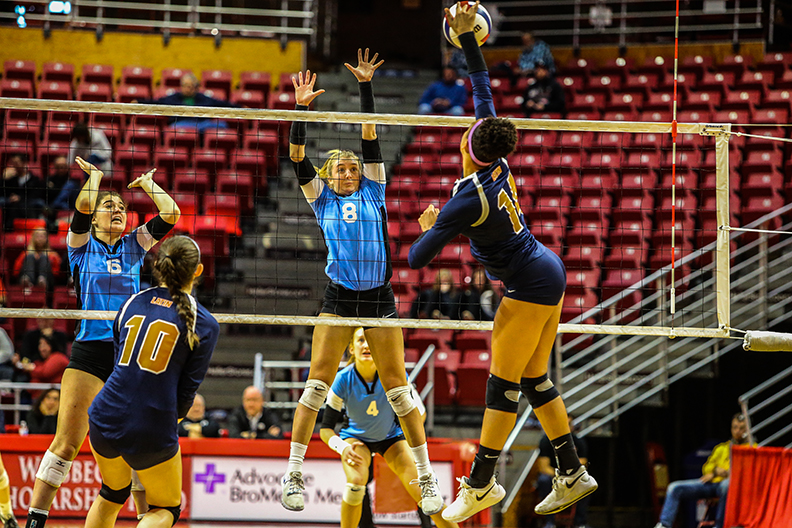