Skip to content
You are here
Home > Stories > MVP Jakubowski can’t explain it, but Huntley rallies to win Autumnfest 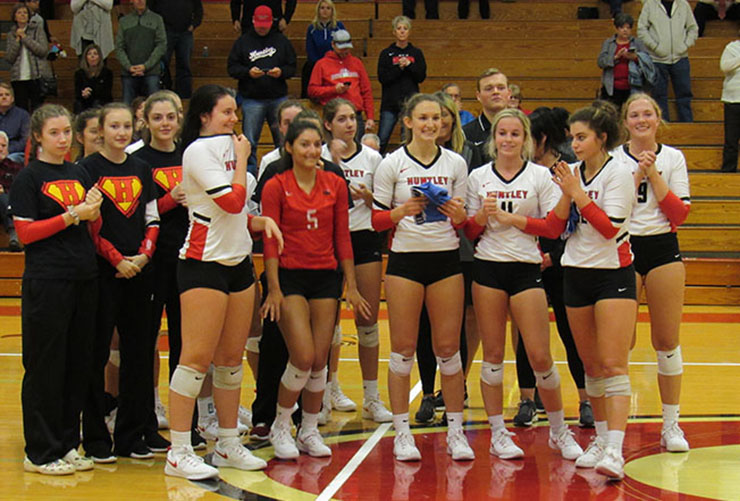 “I don’t even know what happened,” said Huntley’s 5-foot-7 junior setter. “We started playing our game. We started picking up balls a little more, started running a faster offense, and we started putting balls away. And our serving was phenomenal, which got us back.”

Huntley looked dead in the water Saturday in Game 1 of the championship match against Benet at Autumnfest hosted by Glenbard East. A kill by Benet’s 5-11 senior outside hitter Valetina Tabares gave the Redwings a 22-15 lead and prompted a Huntley timeout.

But a funny thing happened after the brief break. The Red Raiders were suddenly unstoppable, going on an 8-1 run to tie the set at 23-23. The game remained tied at 24-24 and 25-25, but a kill by Huntley’s Loren Alberts and an ace from Arianna Torres capped the improbable comeback.

Huntley (30-3) carried that momentum into Game 2 — a set which featured eight ties – and aided by a controversial net violation against Benet with the Red Raiders nursing a 23-22 lead, closed out the Redwings 27-25, 25-23 to claim the Autumnfest title.

“That momentum from Game 1 really helped,” said Huntley coach Karen Naymola. “It helped our confidence. I think we were playing a little timid in Game 1. We tipped more in that game than we did the whole tournament.

The confidence gained from its fifth-place finish at the ASICS Challenge continues to produce win after win for the Red Raiders.

“Confidence, and just playing all out no matter what,” said Jakubowski, who was named tournament MVP. “Even the balls that are down we’re still going after. Picking each other up, covering because they (Benet) had a huge block.”

Five-foot-11 senior outside hitter Julia Johnson led Huntley with 12 kills, Alberts added 9 kills, Emma Konie had 6 kills, Sarah Zayas dug 14 balls and Jakubowski was all over the floor to the tune of 13 digs and 28 assists.

“There’s only one way to go from here … up,” Jakubowski said. “Just keep going, keep rolling. We’re on a roll right now.”

“They played a lot better than we did in just about every aspect,” said Benet coach Brad Baker. “We’ve seen clean volleyball, but this has just been a battle with ourselves all week. We’re just trying to scrape out wins. I don’t know if it’s tired legs, tired feet.

“We’ve played a lot of matches (12) in the last eight days and you can count the number of teams ranked nationally we’ve played,” he added. “But we get no break Tuesday (hosting No.1 Marist). We can’t feel sorry for ourselves.” 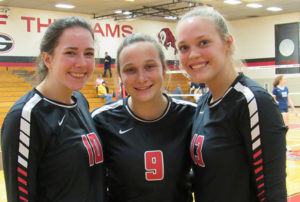 Benet reached the championship match following an emotion-filled 25-21, 19-25, 25-20 win over host Glenbard East (26-7), which advanced to the Gold division of its own tournament for the first time in the 29-year history of Autumnfest.

“It felt amazing to get into the Gold,” said Glenbard East’s 6-foot Ball State-bound outside hitter Allison Hamaker. “The coach (Marci Maier) told us on Thursday that no Glenbard East team has done it before.

“We all looked at each other and said we wanted to be the first team,” she added. “This is what we want. We want to go into history as being one the best Glenbard East teams we’ve ever had.”

Perhaps a bit drained by the semifinal loss, Glenbard East fell to Mother McAuley 25-17, 25-15 in the third-place match. 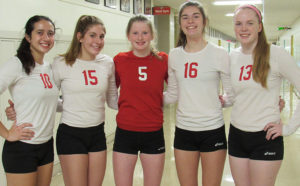 “Sometimes when you play such an emotional game like they did it takes a lot out of you, and I think they might have been a little emotionally drained, which helped us a little bit,” said Mother McAuley coach Jen DeJarld.

DeJarld added that her team (21-13), which at times has four sophomores on the floor, is final finding its rhythm.

“We starting to peak,” she said. “We are really coming together with our passing, and that has helped us run our middles more. We’re were in system more, which we really struggled with early on. We’re finding a rhythm, which I’m really happy about.”

Joliet Catholic (21-12) reached 20 wins for the 17th time in the past 18 seasons under coach Chris Scheibe, winning the Silver division with a 25-13, 25-22 victory over Downers Grove North. It was the Angels’ ninth win in their last 10 games.

Elsewhere, Barrington (23-11) made it a night to celebrate in the Jakubowski household by defeating Crystal Lake South 25-13, 22-25, 25-21 to win the Bronze division. Barrington is coached by Taylor Jakubowski’s mother, Michelle Jakubowski.