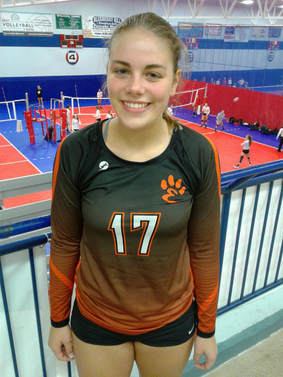 Edwardsville’s Rachel Pranger
Some high school student-athletes re-open their college recruiting because they are unhappy with their initial choice.

Edwardsville’s Rachel Pranger has re-opened her college recruiting because she wants to change sports.

Pranger is one of the top two-sport athletes in the St. Louis metropolitan area. She was the second-leading scorer on last year’s 32-1 Edwardsville basketball team that lost to Geneva 41-40 in the Class 4A championship game, and is the leading attacker on the school’s volleyball team that finished fifth at last weekend’s St. Charles East Scholastic Cup.

After initially telling recruiters that she would play basketball in college, Pranger had a change of heart over the summer.

“I really love both sports,” the 6-foot outside hitter said. “But once everything started, basketball didn’t feel right to me. Nothing was a real good fit. I want to try volleyball because I don’t think I would been happy playing basketball.”

Pranger has been named volleyball “Player of the Year” three times by the Alton Telegraph and was a first-team all-area selection by the Belleville News-Democrat as a junior.

“She’s pretty well-known in our area,” said Edwardsville coach Jami Parker. “She’s put up great numbers. It’s more than 350 kills this season. “We’re just trying to get her name out there to make sure people who had previously recruited her for volleyball and she told them ‘No’ know she’s available.”

Pranger has played basketball and volleyball most of her life, but after her freshman year she gave up club volleyball to focus on basketball.

“She’s doing all this honestly without playing club for a couple of years,” Parker said. “She’s been all basketball for three years now, so she’s doing this based on our high school season and the training she’s getting three months a year.”

Pranger plans to play volleyball this winter and spring for High Performance-STL, the greater St. Louis area’s premier youth volleyball club, where she hopes to home those skills that will make her more attractive to college coaches.

“They’re still things I can improve on,” Pranger said. “My hitting it’s probably my strongest asset, but I really need to work on my defense and my blocking forms. It’ll get there. I like the fast pace of volleyball, and just the feeling of being with your teammates celebrating after every point.”

She has already learned how to compete at the highest levels through her basketball training in high school and on the club level.

“We work hand-in-hand with the girls basketball program,” Parker said. “They took second in the state last year so she’s learning to compete at a very high level. The movements, the slides, the quickness, things like that, all those come from basketball as well.

“She’s also not taking a lot of the injuries that kids who play volleyball all year round will take. Her shoulders are fresh because she spent the off-season playing basketball, so she’s not overusing anything in particular, which is nice.

“The sky’s the limit for her,” Parker said.

Pranger is chasing the school’s kill record set by former Edwardsville all-stater and Purdue standout Sam Epenesa, who accumulated 1,250 kills during her high school career while leading Edwardsville to the Class 4A state semifinals in 2010 and the supersectional in 2011.

“I think I’m fewer than 200 kills behind her, so it’s still possible,” Pranger said.

When she’s not competing on the volleyball court, Pranger likes to hang out with her friends. They spend most of their time doing what comes naturally in Edwardsville – population 24,000 – playing sports.

“People who don’t live in Edwardsville might say there’s a lot to do, but living there, there’s not as much to do,” she said.

Except, perhaps, planning a college future that now includes volleyball.