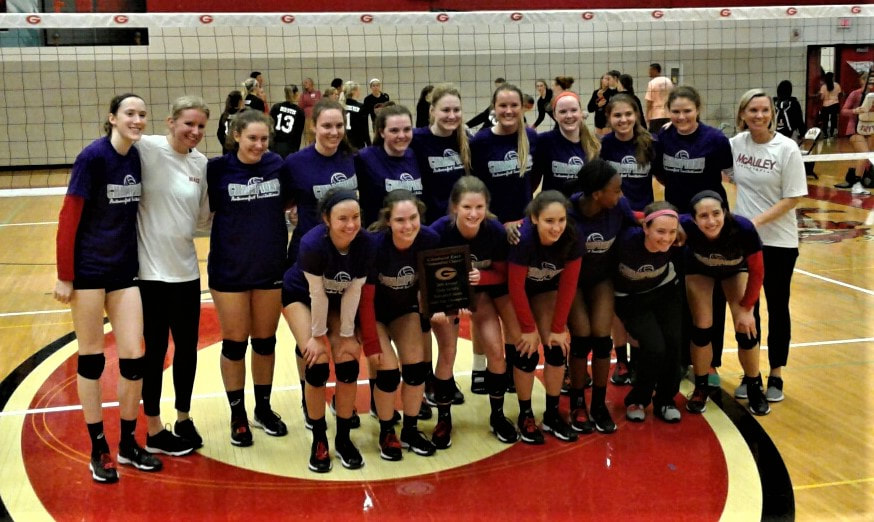 
Benet rolled out yet another lineup over the weekend in its attempt to replace injured outside hitter Clare Byrne, this time featuring 5-foot-10 outside hitter freshman Kyla Kenney subbing for the team’s second-leading attacker.

While the youthful lineup, which at times featured two freshmen and a sophomore in the front row, produced a semifinal victory over St. Charles East, the Redwings were unable to protect a 23-19 lead in Game 1 in the championship match against No. 3 seed Mother McAuley.

While Benet coach Brad Baker was disappointed in the final result, he refused to pin the blame entirely on his young starters.

Passing was a big part of the problem, Baker said.

“We weren’t executing,” he said. “Our passing was off, which makes setting harder, which leads to hitting from different angles, which makes it easy to get double blocks. We were not passing clean and we were hitting against double blocks over and over again.

“To get here (the championship match) is good with them, but we don’t just want to get there, we expect them to perform when they get on the court and they did all day today,” Baker added. “But in this match, it wasn’t just them, it was a collective effort. We need to be better.”

All-tournament selection Lilly Johnson, the only senior in the lineup for Benet, led the Redwings with 8 kills in the title match. Junior Caitlin McKee added 4 kills, Kenny added 3 kills and freshman Rachel Muisenga had 2.

“I know in previous seasons we faced them a lot,” Benet setter Ally Van Eekeren said. “They’re a great team. It just makes us better playing them that many times. We try not to focus on the past because a team could come out a completely different team. We try to focus on how they are playing at that time.”

The only dark cloud for McAuley was losing 6-foot senior middle hitter Amanda Horn to an injury earlier in the day Saturday. The Mighty Macs were already without injured middle Nora Burke, a 5-10 senior.

“We’ve been working hard to keep our energy level up this whole tournament,” McAuley junior setter Nancy Kane said. “We did a great job. We were all consistent throughout. Everybody contributed to our team’s win, which is really nice.

“Amia Owolabi, who is normally a right side, came in and stepped up when Amanda Horn got injured,” she added. “Everyone’s working hard.”

But nobody worked harder in the championship match than McAuley senior outside hitter and tournament MVP Charley Niego, who led the Macs with 13 kills, 2 blocks and 12 digs, although new addition to the lineup Moira Mixan made the most of her weekend adding 5 kills in the title bout.

“I’m glad I had the opportunity,” said Mixan, a 5-9 senior who was named to the all-tournament team. “I’m excited to be playing. I’m excited to have a starting position. I hope I get to keep playing for the state playoffs. It’s pretty fun. It’s tough watching.”

Joliet Catholic coach Chris Scheibe did not have much fun watching her team fall to Waubonsie Valley early Saturday morning. But the Angels (25-7) did bounce back to defeat Naperville Central 23-25, 25-23, 25-22 and Downers Grove North 28-26, 25-16 for fifth place.

“We just didn’t come out with a lot of energy this morning,” Scheibe said. “I think we took them for granted knowing that we are seeded higher than they are in our sectionals. We just expected to come out here and play.

“But I’m happy that they rebounded against Naperville Central and Downers Grove North,” she added. “I’m not pleased with the outcome of the day, but it wasn’t disastrous and we can go back to work in practice and gear up for our regional.”

“We wanted to make sure we started off with a lot of energy and be consistent throughout the entire game,” Waubonsie Valley senior outside hitter Gisela Bode said. “We were all up early in the morning running and dancing making sure we were ready.”

Waubonsie Valley and Joliet Catholic could meet again in two weeks at the Bolingbrook Regional.

“I think this really gets us excited for regional, knowing that we beat them,” Bode said. “It’s going to help our confidence.”