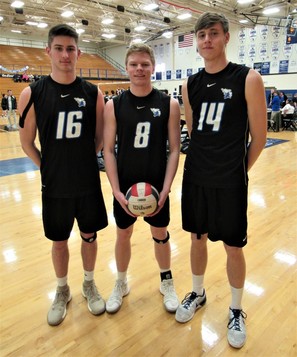 There’s no holding back for the Lincoln-Way East boys volleyball team.

In a battle of two of the top teams in the state, East totally dominated in a 25-18, 25-13 victory over Brother Rice on Wednesday, April 11 in Chicago.

It was the second of a possible five meetings between the two powerhouse teams this season. They met in the third place match on Saturday, March 31 at the Wheaton Warrenville South Tiger Classic. There, East edged the Crusaders 25-18, 24-26, 25-23. This time around it was domination by the Griffins (13-1).

“We took care of business,” East’s 6-foot-1 senior outside hitter Ian Piet said. “We played them close the first time and we wanted to come out here and make a statement. Between high school and club. we’ve played against those guys a lot. We know we just have to come out and play well.”

Tom Phelan (4 kills) led the Crusaders (12-3). But all the kills for the senior outside hitter came at the start of the match. Senior middle hitter Dan Littleton (3 kills, block) also contributed for Brother Rice.

“Our serve receive was poor and we never got in any rhythm,” Brother Rice coach Dan Dwyer said. “We hit negative 0.83 for the match. But give East credit. They put more pressure on us than any other team. We were up 7-3 (in the first set). Then Ian Piet went on that service run and we weren’t the same after that.”

Indeed Piet pounded some laser serves, two of which wet for aces, in a 5-0 run that put the Griffins ahead 8-7. Phelan pushed his final kill of the match to knot the set at 8-8. Then East embarked on a 6-1 spurt to take the lead for good. The Crusaders, who couldn’t solve the East block, never got closer than four points the rest of the way.

“We have good hitters, but the key is our blocking,” Herlihy said. “Between myself, Luis (Zavala), George (Kougan) and Mark (Wroblewski), we’re working hard on the blocking. That and our serving is the big thing for us.

“This win shows a lot. We know it’s hard to beat a team multiple times, but we’re never holding back.”

The Crusaders did fight back to within 20-13. Then East said enough as Herlihy had a kill and a block, Lewis lambasted a kill, Herlihy hammered another kill and Wroblewski walloped an untouched ace to end it.

“We’ve been focusing on our serving and that gets other teams out of system,” East coach Kris Fiore said. “We did a tremendous job of being aggressive and they had trouble putting the ball away.

“We wanted to have a good showing in this environment. We know this is where the sectional is being held. But afterward I also made it clear to the team that Brother Rice is a good team and we know they will be working hard to get ready for the next time.”

The two teams could meet again on Saturday, April 21, in the final round of the Brother Rice Smack Attack, which will be held at St. Xavier University. The following Saturday could bring another meeting in the finals of the Lincoln-Way East Invite. Then Brother Rice hosts the sectional, which will feature many of the top teams in the state, at the end of May.