(Originally published in Nove,ber 2017, this story has been updated to reflect enrollment classification changes announced by the IHSA in June.) 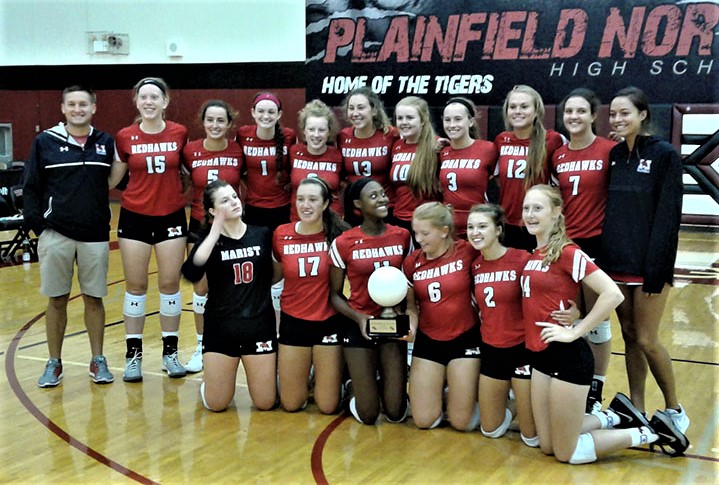 Can Marist repeat as state champion in 2018?

Can Marist hold off perennial nemesis Mother McAuley despite losing most of the mainstays who led the RedHawks to the 2017 state title?

Can Crystal Lake Central get back to the dance despite the loss of the Kelly twins, or will Huntley or Prairie Ridge supplant the Tigers as the far northwest suburbs’ top team?

A lot can happen between now and August, but here is a look at some of the teams poised to make noise next fall (in no particular order):

1. Marist (41-1) – Gone is outside hitter Savannah Thompson. Gone is setter Molly Murrihy. Gone are libero Grace Green, outside hitter Maggie Meyer and middle hitter Katie Hogan. But one East Suburban Catholic Conference coach said the girls on the Marist bench could have been ranked as high as No. 5 in the state. Back will be 6-foot-1 sophomore outside hitter Camryn Hannah, who is also being recruited as a setter. Also back are 5-10 junior middle hitter Abby Callahan, 5-11 junior rightside Katie Dolan and 6-1 junior middle Mattie McCabe. Throw in some talented underclassmen, and coach Jordan Vidovic & Co. could be eyeing a return to the medal podium next fall.

2. Mother McAuley (35-5) – How do you replace Charley Niego? You don’t. But McAuley always seems to find a way to replace with stars with players you haven’t heard of or who would have been stars on any other team. Among those who should emerge from underneath Niego’s long shadow are 5-10 sophomore rightside Amia Owolabi and 5-9 sophomore outside Alena Pedroza. Toss in 5-11 junior setter Nancy Kane and 5-8 sophomore libero Grace Niego and you have the makings of another powerhouse on 99th and Pulaski. McAuley was the only team to beat eventual state champion  Marist this season. Can the Mighty Macs work their magic again in 2018?  Can 6-2 Burke Niego and 6-0 freshman Ella O’Neill prosper in the middle?

3. Benet (32-7) – There were times this season when coach Brad Baker had two freshmen, two sophomores and a junior on the floor at the same time. Nevertheless, Benet reached the finals of every tournament in which it participated, losing to Minooka at the Scholastic Cup and the sectional finals and Marist at Autumnfest. Senior Claire Byrne and 6-2 outside Lilly Johnson are gone, but back are 5-11 junior setter Ally Van Eekeren, 5-11 freshman outside Rachel Muisenga, 5-4 sophomore libero Hattie Monson, 5-9 freshman outside hitter Kyla Kenney, 5-11 sophomore middle Sophie Gregus, 5-10 junior outside Caitlin McKee and junior defensive specialist Caroline Gard. A big middle would help.

4. Sterling (35-3) – Why are they talking about a Class 3A state championship in 2018 at Sterling? For starters, there are the Borum girls – 6-1 freshman Brooklyn Borum (286 kills, 35 blocks, 173 digs and 23 aces), 5-11 freshman Breelyn Borum (147 kills, 552 assists) and 6-foot junior setter/outside hitter Josilyn Borum (268 kills, 329 assists). Then there is 5-5 freshman libero Alexis Rodriguez (547 digs, 58 aces), who teamed with Brooklyn Borum to help lead Sports Performance 14 Elite to a national championship in the 14 Open division of the AAU Junior National Championships in Orlando, Fla., last summer. The Golden Warriors reached the sectional finals before losing to Limestone. Two more steps in 2018 aren’t out of reach.

5. Plainfield Central (22-12) – Plainfield Central was knocked out in the regional semifinals by Neuqua Valley 25-17, 25-27, 29-27, but you have to like the Wildcats’ chances in 2018, especially since 6-4 outside hitter Taylor Landfair was just a sophomore in 2017 and she will be surrounded by a bevy of teammates who also return. Landfair will get help from 5-8 junior libero Katie Shook, 5-9 junior setter Grace Brock and 5-9 junior setter Regan Trueblood. “We were young this year,” said coach Erik Vogt. “I think it’s critically important to have good senior leadership. When the match is on the line, those kids that are seniors have seen it before.” The Wildcats will have that senior leadership in 2018.

6. Quincy Notre Dame (33-9) – The Lady Raiders were the only team to defy Illprepvb.com’s state tournament predictions, falling in three sets to Auburn recruit Micah Allison and St. Thomas More in the Class 2A championship game. The Raiders have been reclassified for 2018, however, and will have to compete in Class 3A. Back to face that challenge for QND will be 5-10 sophomore outside hitter Sydney Hummert (377 kills in 2017), 5-10 junior middle Monica Brown, 5-3 sophomore setter Maddie Peters, 5-4 junior setter Lauren Roberts, 5-10 junior outside Erin Carey and 5-8 sophomore outside hitter Taylor Keck.

7. Windsor-Stewardson-Strasburg (34-7) – Payson Seymour stymied the Comets’ state record-breaking Megan Schlechte, whose 29 kills in the semifinals eclipsed the mark set by Mother McAuley’s Katie Schumacher, in the Class 1A state championship match. But then again, the Lady Indians were able to slow down just about everybody they played this season. Schlechte will be back in 2018, however, as will 5-10 junior rightside Calla Roney, 5-6 junior setter Mackenzi Tabbert and 5-11 sophomore middle Mackinzee Reynolds, making the Comets the small school team to beat in 2018.

8. Newark (34-5) – Madi Malone amassed 448 kills and 57 aces heading into the state semifinals and exited the tournament with 20 more kills and 3 more aces to her incredible season. The 5-11 freshman, who plays for 1st Alliance, will only get better, quicker and stronger. She will also have several of her teammates returning in 2018 including 6-foot sophomore middle blocker Mattie Chapman, 5-4 junior setter Olivia Nelson, 5-8 junior outside hitter Evelyn Martin and 6-foot junior middle blocker Alyssa Gittins. The Lady Norsemen figure to get back to Normal next fall.

9. Belleville Althoff (41-1) – The Crusaders won’t be bad in 2018, but can they be as good as they were in 2017? Six-foot-1 setter extraordinaire Louis Comerford graduates, as does 5-10 rightside Addie Burris, leaving two pretty big holes for coach Sara Thomas-Dietrich to fill. Althoff does return 6-1 sophomore middle Karinna Gall (308 kills in 2017), 5-10 sophomore outside hitter Katie Wemhoener (222 kills) and 5-9 sophomore outside hitter Grace Strieker, but the Crusaders will need a lot of help from players like 5-11 sophomore Nicole Hampton and 5-9 sophomore Mary Wessel if they hope to defend their 3A crown.

11. IC Catholic Prep (13-19) – What’s there to like about the Knights in 2018? Plenty. For one thing, IC loses only two of its top nine players. Among the players expected back for coach Nancy D’Amore are 5-9 junior outside hitter Maya Stovall, 6-3 freshman middle hitter Kaya Hood, 5-11 junior outside hitter Nailah Landon, sophomore libero Bella Leslie and 5-8 freshman setter Sophie Hurt. Furthermore, despite reaching the sectional finals (losing to Latin 25-23, 10-25, 25-23) in 2017, the Knights will get to spend another season in Class 2A while Latin has been reclassified to 3A.

12. Joliet Catholic (28-8) – The Angels saw more of Waubonsie Valley than they wanted to in 2017, losing to the Warriors in the quarterfinals of Autumnfest then falling to Waubonsie in the regional final two weeks later, 25-21, 23-25, 26-24. Replacing 5-9 senior setter Sarah Nahas will be coach Chris Scheibe’s biggest challenge, although Nahas’ heir will be surrounded by a group of more than capable attackers in 5-8 junior Emily Holbrook (261 kills, 146 digs), 6-1 freshman Emily Wilson (228 kills, 38 blocks), 6-2 sophomore Bella Ray (139 kills, 85 blocks) and 5-8 junior Sophie Krzysciak (126 kills, 115 digs). Joliet Catholic won’t see Waubonsie in the state tournament this fall, however, because the Angels are headed back to 3A.

14. Lemont (24-13) – Two of the brightest young stars on the Illinois high school volleyball scene toiled for the Indians this fall – 5-10 sophomore setter Amy Schwem and 6-0 freshman rightside hitter Amanda Rice. Schwem had 16 assists and a kill in Lemont’s 25-16, 25-20 season-ending loss to Marist in the regional final. Five-foot-7 senior Beth Cannon and 6-2 senior Courtney McAuliffe will be huge losses, but Lemont and Schwem have other options to go to in 2018 including Rice and 5-9 sophomore outside hitter Ella Pelen, who had 6 kills in a regional semifinal win over Bradley Bourbonnais. Lemont may still be a year away, but it will be fun watching Schwem and Rice mature.