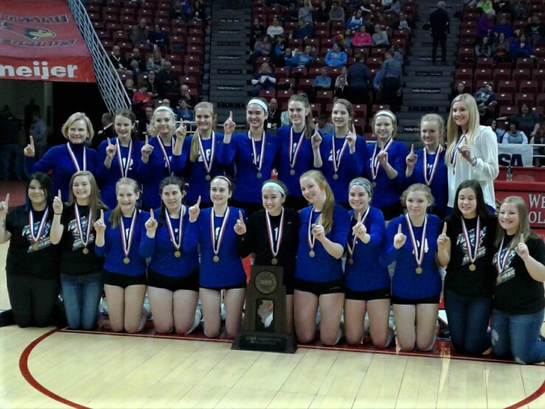 “Honestly, in the back of our heads there was no doubt,” said Marist’s 5-foot-11 senior outside hitter. “We had no doubt. The whole time I knew the other 17 girls, we wanted it just as bad and it feels freaking great to do right now, right here with these girls.”

Marist coach Jordan Vidovic said it was sheer toughness that carried the RedHawks against the potent Minooka lineup and to the school’s first girls volleyball state title.

“Sheer toughness,” he said. “Sheer grit, sheer toughness, all mental. That’s all we talked about. They’re (Minooka) a tough team. They have some firepower across the board. They have a huge block and play great defense. You’ve got to grind it out.

“My teammates put me in great position to play that way,” Thompson said. “I wouldn’t be the player that I am without these girls around me. I owe it all to them.”

Minooka took an 8-4 lead in the third set, but Marist used runs of 5-0 and 12-3 to force the Indians to burn two timeouts. The run swelled to 18-5, and Murrihy’s dump at match point send the RedHawks scrambling into a scrum at midcourt.

“It was a little reminiscent of the first time we played them,” Vidovic said. “We just had to stick with it. Even when things weren’t going well, we just said, ‘Stay the course and keep doing what you’re doing.’ The girls earned this. They deserve to be here right now.”

“We probably gave them a good 15 points on us hitting the ball out … not just out, way out,” she said.

Resurrection almost lived up to its name in the Class 3A championship match, picking itself off the floor after dropping a one-sided first set to heavily-favored Belleville Althoff. But the Crusaders used a 5-0 run to wipe out a 19-16 deficit and beat the Bandits 25-16, 25-23.

It marked Althoff’s first state championship in 11 trips to the state finals. The Crusaders’ best previous finish was second place in Class AA in 1999 under former coach Kathy Wuller.

“It means everything, but outside of these girls I wanted to win this for (Wuller), who’s been such a role model for me,” said Althoff coach Sara Thomas-Dietrich, who played for Wuller from 2000-2003.

“I know I wouldn’t be where I am without her,” Thomas-Dietrich added. “I dedicate my medal to her.”

Althoff wasted little time winning the first set, grabbing leads of 10-4, 14-7 and 20-13. A kill by Resurrection’s Christina Gatta got the Bandits within 21-15, but that was as close as the Chicagoans would get.

“It definitely helped to jumpstart and dominate right away,” said Althoff’s 6-foot-1 senior setter Louise Comerford. “That helped our confidence and momentum to move onto the next set.”

But Resurrection had other plans. The Bandits rallied from an early 9-5 deficit to to take a 19-16 lead on two kills by New Mexico State recruit Brittany Welch and another by 5-11 senior middle hitter Jordyn Sprunk.

“We knew (Welch), being a Division I athlete, would be capable of coming out and taking over the game, which she did,” Thomas-Dietrich said. “She put the pressure on us in the second set and their defense was very scrappy.”

But Althoff answered with 5 unanswered points and finally won on a smash down the line by 5-9 junior outside hitter Grace Strieker.

Welch, a 5-9 senior outside hitter, led Resurrection with 9 kills and 11 digs. Five-foot-10 sophomore outside hitter Caitlin Coughlin added 6 kills, Sprunk had 5 kills and Gatta had 22 assists.

In the Class 2A championship game, Champaign St. Thomas More (39-3) needed a little divine intervention to win the first state championship in that school’s history.

With the score tied at 21-21 in the third set against Quincy Notre Dame, St. Thomas More’s All-American Mica Allison was just trying to get a ball over when fate intervened.

“We practice that, and we do it very well,” St. Thomas More coach Stan Bergman quipped. “I don’t know what to say about it. When it went over, I said, ‘Oh my gosh. Thank you, Lord.’”

Allison, a 6-1 senior All-American headed to Auburn in the fall, finished with 12 kills, 12 assists and 5 digs. But none of
her kills were as big as the last one.

“I was trying to get the ball over,” she said. “I was very scared. It seemed like it stayed on the tape forever. I said, “Please go over.” When it did, I thought, “This is ours. We got this.”

Notre Dame (33-9) dominated the first set, taking a 21-9 lead behind 5-10 sophomore outside hitter Sydney Hummert and a flurry of Sabre hitting errors. St. Thomas More broke an 8-8 in the second game with a 13-7 run setting up the decisive third game.

St. Thomas More eased to a 17-13 in Game 3, but Notre Dame answered with an 8-4 run capped by a Hummert smash. That’s when the volleyball powers smiled on Allison and St. Thomas More.

“We played pretty well at times today, and other times when we needed a big play it seemed like the ball bounced the other way,” said Notre Dame coach Rich Meyer. “They got a size mismatch on us from time to time and that’s part of it.”

In the Class 1A title match, Payson Seymour’s Josie Stanford bounced back from a quiet performance in Friday’s semifinal to lead the Lady Indians to a 25-12, 27-25 victory over Stewardson-Strasburg.

“I think that yesterday there were a lot of nerves … I had nerves,” Stanford said. “I was just overthinking everything. It’s a good thing that Camryn (Flesner) and everyone was there to pick me up.

“Today, I knew from beginning when I woke up this morning that will it was going to be a good day,” she added.

The Lady Indians built an early 15-5 lead in the first set against the Comets and were never threatened. However, Stewardson-Strasburg (34-7) turned the tables on Payson Seymour in the second set and grabbed an early 10-4 lead.

Payson Seymour used a 14-5 run take a by two Stanford kills to take an 18-15 lead, but the Comets countered and finally earned a set point at 25-24 on a block by Maria Gentry and Kasey Bean.

However, the Lady Indians secured the first state championship in school history on two kills by 5-10 senior outside hitter Hylee Schmiedeskamp (10 kills) and another kill by Stanford.

“I think we stayed within ourselves really well today,” Stanford said. “We didn’t let the pressure or the thought of the outcome get in our way. Does this feel like I thought it would? It feels better. So much better.”

“Payson Seymour is the fastest team we’ve played this season,” Comets coach Ronda Schlechte said. “They were able to get around our block and we couldn’t get around them. Our defense was never in the right spot. They were very smart as far as where they placed their balls.”