Skip to content
You are here
Home > Stories > Illprepvb.com’s teams to watch in 2019 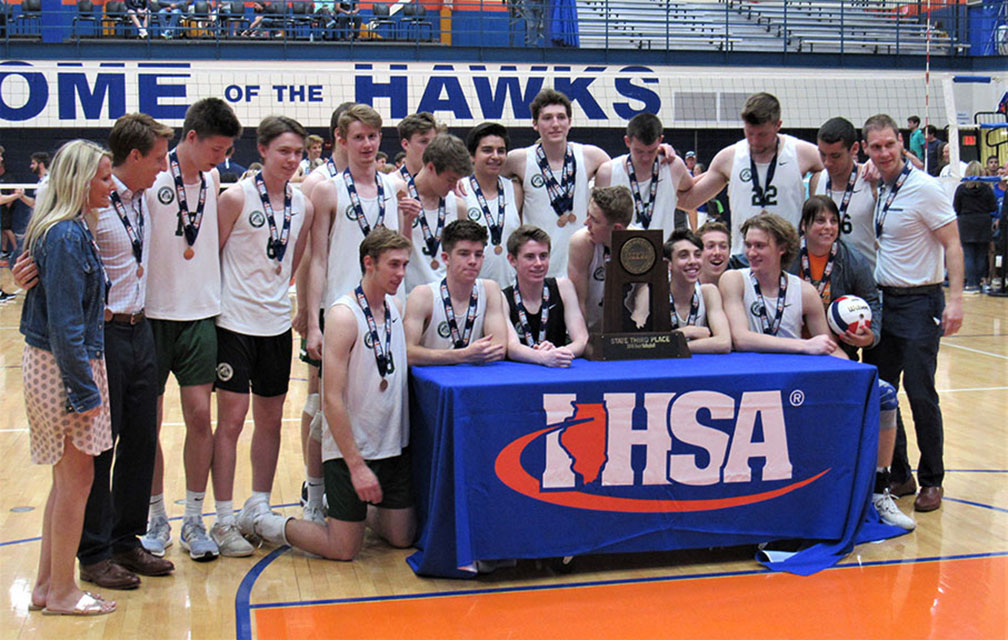 Peering into the Illprepvb.com crystal ball …

Can Glenbard West return to the top of the Illinois high school boys volleyball world after seeing its streak of three consecutive state titles end in a semifinal loss to Neuqua Valley?

Will junior-heavy Lincoln-Way West make another run through the southern portion of the bracket behind Ben Pluskota and David Flores?

Can Barrington put together a fifth consecutive 30-win campaign?

Or will another team emerge as the 2019 season progresses?

A lot can happen between now and next March, but here is a look at some of the teams poised to make noise next spring (in no particular order):

– Gone are 6-8 middle hitter JT Ardell, 6-6 outside hitter Stone Metz and 6-1 defensive and serving specialist Jackson Roach. But those are the only players off the 2018 roster coach Christine Giunta-Mayer loses to graduation. Among the top players expected to return are 6-1 junior outside hitter Ryan Swartz (228 kills, 42 blocks through the sectional finals), 6-2 sophomore outside hitter Ben Harrington (214 kills, 57 blocks, 27 aces), 6-3 junior middle hitter Connor Williams (94 kills, 30 blocks), 6-3 junior setter Henry Curtis (921 assists, 68 kills, 23 blocks) and 5-11 junior libero Zach Morris. The rest of this spring’s roster rarely saw the court, but there’s enough firepower and experience back for the Hilltoppers to make another run at a state championship.

2. Lincoln-Way West (30-9) – Two losses to eventual state champion Lincoln-Way East. Two losses to Marist. Two losses to Plainfield East. Two losses to Neuqua Valley. The young Warriors got plenty of time on the court against some of the best teams in the state in 2018, and most of coach Jodi Frigo’s players are expected to return in 2019. Five-foot-11 junior outside hitter Ben Pluskota, who led the team with 229 kills despite missing a big part of the early season with an injury, figures to be the centerpiece of Lincoln-Way West’s offense. But he’ll have plenty of help in the persons of 6-4 junior rightside Louden Moran (229 kills, 48 blocks), 6-2 junior middle hitter Chris Dargan (145 kills) and 6-1 junior setter David Flores (849 assists, 50 kills).

3. Barrington (34-6) – A disappointing performance in the state quarterfinals against Glenbard West marred what was otherwise an outstanding season for Barrington, which won 19 matches in a row (16 in straight sets) before falling to the Hilltoppers. All-state selection Michael O’Toole and his 409 kills are history, as are 6-2 senior setter Evan Carroll (752 assists, 35 kills, 47 blocks), 6-5 middle hitter Petar Lumovic and libero Thomas Chapman. However, expected back are 6-4 junior outside hitter Gabe Hartke (257 kills, 25 blocks, 43 aces), 6-3 sophomore opposite Ben Ridgway (78 kills, 12 blocks), who missed some time with an injury, 5-10 junior libero Kyle Vasquez and 5-8 junior outside hitter/libero Chris Babicz. Coach Rob Ridenour will be shopping for a few good middles.

4. Neuqua Valley (33-8) – How do you replace all-state outside hitter Jeremy Grove and his 395 kills (despite missing more than a dozen matches with a high ankle sprain)? By committee, most likely. At least coach Erich Mendoza won’t have to figure out who will be setting his Wildcats in 2019. Six-foot-7 junior Kevin Kauling (645 assists, 102 kills, 62 blocks, 76 aces), who missed this year’s sectional tournament while training with the U.S. Junior National Team in Colorado Springs, Colorado, is expected back for his senior campaign. Kauling will look to get the ball to 6-6 junior middle hitter Jeremy Cardenas (210 kills, 93 blocks) and 6-3 junior middle hitter Ryan McGladdery (77 kills, 85 blocks) and whoever earns a spot at the pin. Mendoza will also have to replace libero Francisco Comas.

5. Oak Park-River Forest (28-8) – Two good things happened to the Huskies this season: 1. They got valuable experience by advancing to the state quarterfinals (albeit through one of the easiest sectionals in the state), and, 2. just about anybody who contributed to the cause is expected back in 2019, including all-state special mention setter 6-4 junior Sean Califf (706 assists, 126 digs in 2018). Oak Park’s junior class also included 6-2 outside hitter Lucas Schattauer (236 kills, 114 digs), 6-4 rightside Quinton Kitzman (186 kills, 54 blocks), 6-5 outside hitter Kyle Rasmussen (214 kills), 6-5 middle hitter Jared Schainis (62 kills, 51 blocks) and 5-9 libero Mike Perla.

6. New Trier (34-8) – The Trevians will be comparable to a donut in 2019: a big hole in the middle, but pretty tasty on the outside. New Trier loses 6-6 middle hitter Mike D’Attomo and his 147 kills and 6-6 middle hitter James Snyder and his 148 kills to graduation. But don’t cry for New Trier. The Trevians will be loaded on the outside with 6-4 junior Jay Saravis (161 kills, 33 aces), 6-4 sophomore Colin Heath (145 kills, 107 digs) and 6-5 sophomore Peter Brown (113 kills, 60 digs). Six-foot junior Aaron Schatz also returns to anchor the defense, while 6-2 junior Ben Wiegand is expected to set. New Trier will be seeking its sixth consecutive quarterfinal berth in 2019.

7. Hinsdale Central (28-10) – Yes, the Red Devils lose some valuable pieces from the team that lost to Neuqua Valley in the sectional finals, including 6-2 senior setter/rightside hitter John Zolpe and 6-5 middle hitter Nick Tienken. But Hinsdale Central coach Stephanie Kaegebein also has a lot returning, including 6-6 junior outside hitter Cal Snyder, who will begin his third year as a varsity starter, 5-10 junior outside hitter/rightside Richie Lozanoski, and libero/defensive specialist Gavin Schwarz. Kaegebein really likes the lefty Lozanoski’s potential in 2019. “Richie is an under the radar, humble quiet competitor who lets his game speak for himself,” she said. “His name will not be so under the radar in 2019.

8. Marist (33-5) – As long as Marty Jepsen is around, the RedHawks have a chance to beat anyone, anywhere, any time. The 6-foot-2 Jepsen emerged last season as one of the most dominant outside hitters in the state, leading Marist to the No. 1 ranking for much of the season before it was upset by Brother Rice in a sectional semifinal. 2018 Coach of the Year candidate Jordan Vidovic does have to replace middle hitter Patrick Mahoney and libero Brady Mack. But Jepsen, returning setter Rocky Mayer, outside hitter Ryan Rappold and a host of talented underclassmen who never seem to lose at the lower levels should keep the RedHawks at or near the top in 2019.

9. Loyola (27-12) – Youth and injuries plagued the Ramblers early, but by the end of the season they were one of the better teams around, reaching the sectional finals before losing to New Trier. Much of the credit goes to 6-5 junior outside hitter Jack Howard, who led the Ramblers in kills as a sophomore in 2017 and will celebrate his fourth year on varsity next spring. Coach Lionel Ebeling is also excited to welcome back 6-1 junior setter Henry Clemons and 6-3 sophomore outside hitter John Hitt. But the loss of 6-7 rightside hitter Drake Johnson to graduation is a big blow, as are the departures of 6-3 middle hitter Matt Wiertel and 6-5 middle Nick Howard.

10. Boylan Catholic (26-5) – The Titans reached the regional finals before losing to powerful Libertyville. But a strong 3-2 performance at the Downers South Invitational late in the season with a young lineup demonstrated that the team from Rockford is ready to make some noise in the near future. The best of the Boylan bunch is 6-1 junior outside hitter Parker Nelson, who makes the 120-some mile roundtrip jaunt to train at Sports Performance. Other top Titans include 6-1 junior setter Gabe DeBenedetto, 6-foot junior outside hitter Ryan Corrigan, 5-4 sophomore defensive specialist Kenny Kirnberger, 5-11 sophomore rightside hitter Westin Roy and 6-5 junior middle hitter Stephen Lewandowski. 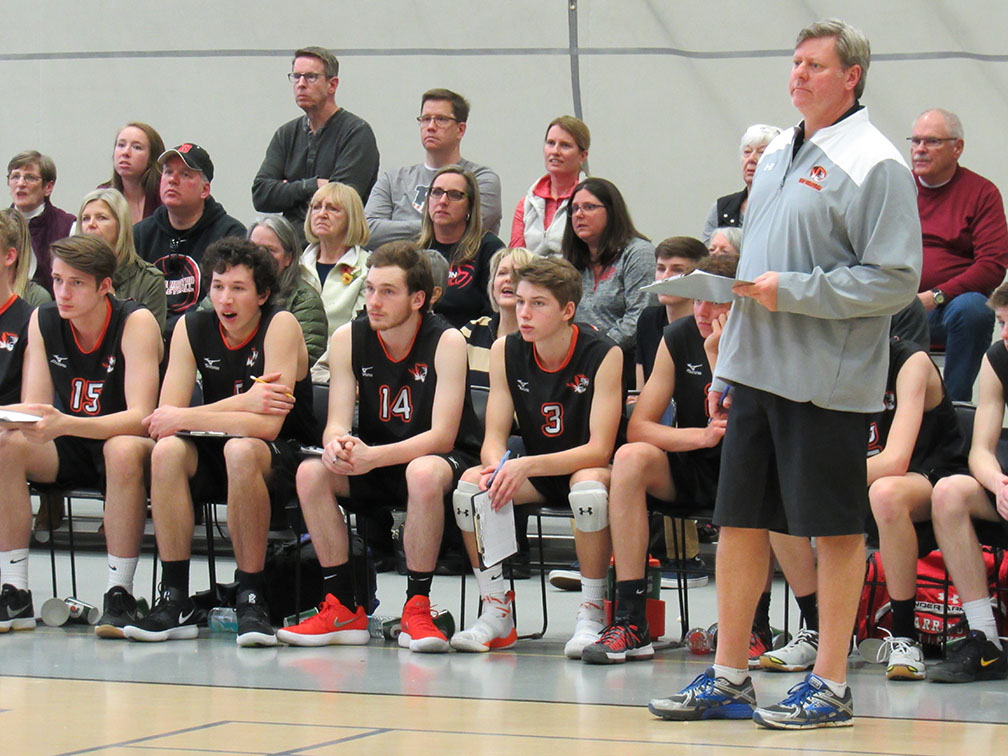 11. Wheaton Warrenville South (16-21) – A 4-13 start was a tough way to begin the year for a team with only four seniors on the roster. But the Tigers were much better during the second half of the season, going on a 9-4 tear before falling to Metea Valley in the regional semifinals. WW South will try to return to prominence in 2019 behind 6-4 sophomore setter/opposite hitter Zeo Meyer (365 assists, 236 kills, 52 blocks, 40 aces) and 6-2 junior outside hitter Chase Keating (253 kills, 40 blocks, 126 digs), the latter a three-sport athlete. Also expected to return in 2019 are 6-6 sophomore outside hitter Josh Gottlieb, 6-6 middle hitter Kyler Nielsen and 6-2 junior outside hitter Owen Struebing.

12. Minooka (18-17) – Mike Kargle’s team was not only young, but nary a senior saw the floor for the Indians in 2018. The biggest name to watch in 2019 is 6-4 junior Alginon Lewis-Fregeau, who only recently began focusing on volleyball. In a late-season match against Plainfield East, Lewis-Fregeau pounded out 10 kills and contributed a block. Other players to watch in 2019 are 5-10 sophomore defensive specialist Connor Shields, 5-8 sophomore libero Caden Ritchey, 6-4 junior middle hitter Noah Easter, 6-foot sophomore setter Rafael Vieyra, 6-2 sophomore opposite side hitter Shane Odoms, and 6-2 sophomore outside hitter Evan Faifer. Look for the Indians to vie for the Southwest Prairie Conference title. 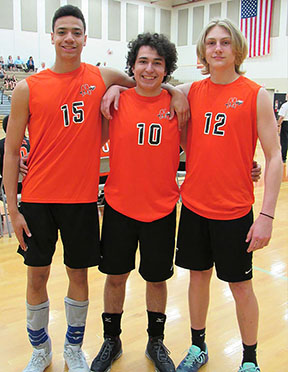 13. St. Francis (15-21) – A youth movement born of necessity (St. Francis graduated 10 seniors in 2017) should start to pay dividends in 2019 for veteran coach Mike Lynch, who earned his 500th career victory when the young Spartans defeated Plainfield Central 27-25, 25-22 at the Benet invite. Ten of the 12 players on Lynch’s varsity roster return next spring, and in a narrow 25-19, 23-25, 25-22 loss to mighty Naperville Central back in mid-April, Lynch rolled out a starting lineup that featured three freshmen and two sophomores. Top players back from this year’s team will be 6-2 freshman setter Kevin Schuele, 6-foot-6 sophomore middle Bryce Walker, 6-1 freshman outside hitter KJ Glab and 6-1 junior Noah Larson.

14. St. Rita (21-19) – Rightside hitter Charlie Selke (180 kills, 185 digs) and outside hitter Mike Mitchell are the only key losses from this year’s state quarterfinalist. Back for another run are 6-2 junior setter Joe Horn (702 assists, 68 kills, 54 blocks, 36 aces), 6-3 sophomore outside hitter Colin Dahill (186 kills, 127 digs), 6-3 junior outside hitter Quinn Coghlan (159 kills, 102 digs) and 5-10 junior defensive specialist Matthew Kinnerk (120 digs). The Mustangs are no strangers to strong competition (Marist invite, Tiger Classic, Smack Attack and Lincoln-Way East invite) so they should be better prepared to make some noise at state once they get through what should prove to be another easy sectional.

15. Lincoln-Way East (39-3) – Wil McPhillips, Danny Pacini and Brent O’Donnell are all that remain from the 2018 state championship team, but that should be enough of a foundation for Illprepvb.com Coach of the Year Kris Fiore. The 6-4 junior middle hitter McPhillips had a monster state championship match against Neuqua Valley despite only compiling 107 kills and 35 blocks heading into the state tournament. More of the same will be expected in 2019. O’Donnell shared playing time with the graduated Jeremy Walsh and had 455 assists during his time on the court. Pacini (230 digs) will be asked to shoulder a bigger part of the backrow load with the graduation of Blake Boykin.