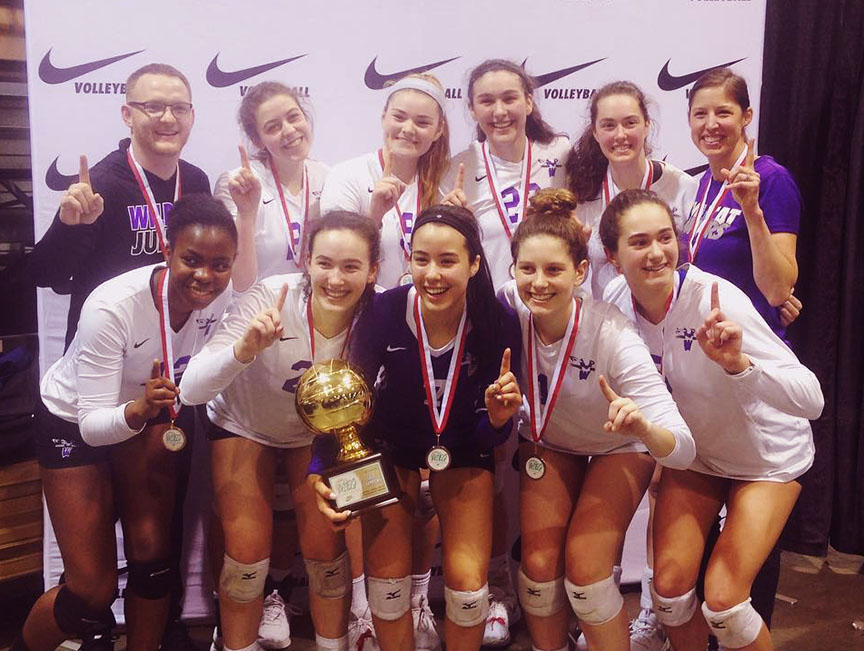 Wildcats Jrs. 18 Black defeated HPSTL 18 Royal out of St. Louis, Missouri, in the championship match Sunday to win the 18 USA division at the 2019 Nike Mideast Qualifier at the Indianapolis Convention Center in Indianapolis, Indiana.

The bid was re-allocated since Wildcat Jrs. 18 Black had already qualified for the USA Volleyball Girls Junior National Championships in Dallas Texas, April 26-28, in the 18 USA division, earning a bid at the Winter Volleyball Championships at McCormick Place in January.

The crew from the North Shore battled its way through a crowded field of 75 teams last weekend to win the division, bouncing back from a second-day loss to VC United 18 Elite to defeat HPSTL 18 Royal, 25-20, 25-27, 15-11, in the championship match.

“Winning the 18 USA Division at MEQ’s was an amazing experience,” said coach and Wildcat Jrs. program director Cassandra Rose. “Our team played solid, focused volleyball throughout the weekend and desired to come out on top. We could not be more proud of their success.

“It’s a great way to head into nationals in Dallas,” she added.

The Great Lakes Region will be well-represented at nationals in the 18 USA division by Wildcat Jrs., Epic United 18 Elite ROX and Sky High Adidas 18 Black, the latter two also earning bids at the Winter Volleyball Championships. IL HPSTL 18 Select also qualified earlier this season out of the Music City qualifier.

1st Alliance 17 Black (pictured right) was the top local entry in the 17 USA division, advancing to the semifinals before losing to finish 9-1 and tied for third place. However, by defeating Rockwood Thunder 17 Navy, 25-20, 25-16, in the consolation match, 1st Alliance 17 Black earned the bid to nationals.

1st Alliance 17 Black has been playing with both purpose and heavy hearts since losing teammate Beth Dunlap of Downers Grove North, who was struck by a car outside her high school on February 19. Dunlap passed away a few days later.

“Beth’s ultimate goal this season was to qualify, and this team was determined to #PlayForBeth this weekend and earn that bid for her,” said 1st Alliance VBC’s Elizabeth Baetzel. “(Rockwood Thunder) was a tough match, but these girls played their hearts out for the win and the bid.”

The only Illinois team other than Wildcat Jrs. 18 Black to advance to the finals in any division at the Mideast Qualifier was Cyclones 18 Black Adidas out of Aurora.

Cyclones 18 Black Adidas, which won the 18/17 Club division at the at the President’s Day Tournament hosted by Sports Performance at the Schaumburg Convention Center, finished second in the 18 American division, losing to Six Pack 18 out of Cedar Falls, Iowa, 25-21, 25-12.

Chicago Elite 18 Elite also did well in the 18 American division, finishing ninth after going 6-2 at the qualifier.

Looking at the top local finishers in the other divisions, Michio Chicago 15 National finished tied for fifth at 5-3, Sky High Adidas 15 Black was 21st at 3-5 and UNO Girls 15 Elite went 2-5 and was 41st in the 15 Open division.

Sky High Adidas 17 Black, which earned a bid in the 17 National division by winning the Windy City Power League, went 6-2 and tied for ninth place in the 17 Open division with Adversity G17 Adidas, which finished 4-4.

In the 17 USA division, Sky High Adidas 17 Red tied for fifth place after going 4-4 in the qualifier.

Michio Chicago 18 National has already earned a bid to nationals in the 18 National division after finishing second in the Windy City Power League.