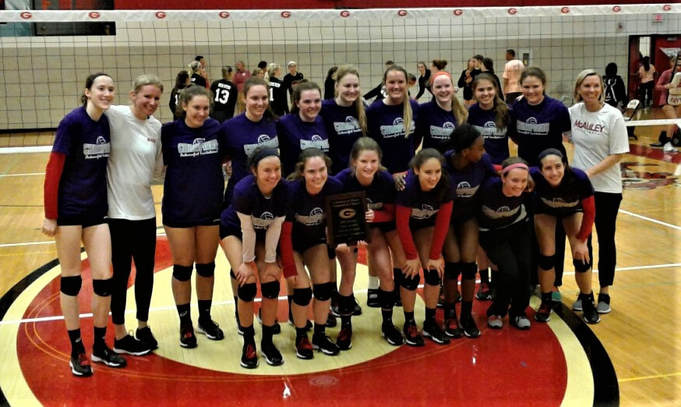 Mother McAuley after its Autumnfest championship.

See a trend here? Other than Cary-Grove’s 2009 title team led by Kelly Lamberti and Colleen Smith, you have to go all the way back to 1991 and Belleville West to find a team not from the western or southern suburbs of Chicago that ruled the big school state volleyball field.

Coaches and fans affectionately call the Class 4A sectionals featuring teams from the western suburbs and the sectional loaded with south suburban powers the “sectionals from Hades.”

Thanks to the IHSA, many of the teams worthy of appearing at Redbird Arena are eliminated by the time the supersectionals are even played.

Who could forget how the top two teams in the state – Benet and Mother McAuley – met at Hinsdale Central supersectional in 2014? Benet defeated McAuley in a classic 27-25, 37-35 match then coasted to a state title in anticlimactic fashion.

The following year, St. Francis and Benet met at Bolingbrook with St. Francis holding on for a 21-25, 25-22, 25-22 win. The Spartans cruised at Redbird Arena, surrendering 20 points in a game only once.

Last year, arguably the two best 4A teams in the state, Geneva and Mother McAuley, played out what proved to the state championship – and eventual national championship match – at Hinsdale South, with McAuley squeezing out a 22-25, 25-20, 25-21 win.

That scenario will likely play out again in 2017.  The team in the most danger? No. 1-ranked Marist, which not only has to navigate Lincoln-Way East (26-10), Marian Catholic (29-7) and Sandburg (29-8) in the sectional, but must then try to beat host McAuley in the super.

Geography should not be an issue in Class 4A. Most teams travel long distances to play in regular-season tournaments, and for half the teams in the field, travel would only be a consideration once.

All but a dozen or so 4A teams are within a 60-mile radius of Chicago, and the far southern Illinois teams are regulars at local tournaments like the Scholastic Cup and Autumnfest. But they can continue to be afforded their own sectional, which often feeds into a supersectional featuring a western suburban team.

There is no reason the Chicago area 4A field cannot be seeded like football, 1-32, with the remaining teams allocated to geographically-appropriate regionals. An advisory committee – comprised of coaches, officials and media — could easily determine the top 32 teams.

Years ago, boys tennis legends like Hersey’s Tom Pitchford and Bloomington’s Barry Nixon and a handful of others including at least one media member would meet in Bloomington to seed the top 32 singles players and doubles teams in the state tournament. They got it right … a lot.

That would certainly go a long way to filling the cavernous Redbird Arena.

Teams often play anywhere between three-to-five matches on a single day during the regular season. Asking them to play once on a Friday and twice on a Saturday is a small price to pay for a quality state championship tournament.

(You have to believe that based on their resumes this year, Edwardsville or Normal deserve a better fate than to likely face Minooka in a supersectional.)

There are a few times that the IHSA gets it right and the state championship game brings together the two best teams in each class. But those occasions are by accident, not design.

Respect. That would be nice of the IHSA

Something similar happened this year in 4A but, involved 2 Southern Illinois teams. Althoff Catholic was taken to 3 sets only 7 times this season. 3 of those 7 were against Breese Mater Dei. Because of geography they were forced to meet in a Sectional final. At the time of all 3 games they were ranked number 1 and 2 in 3A by max preps.