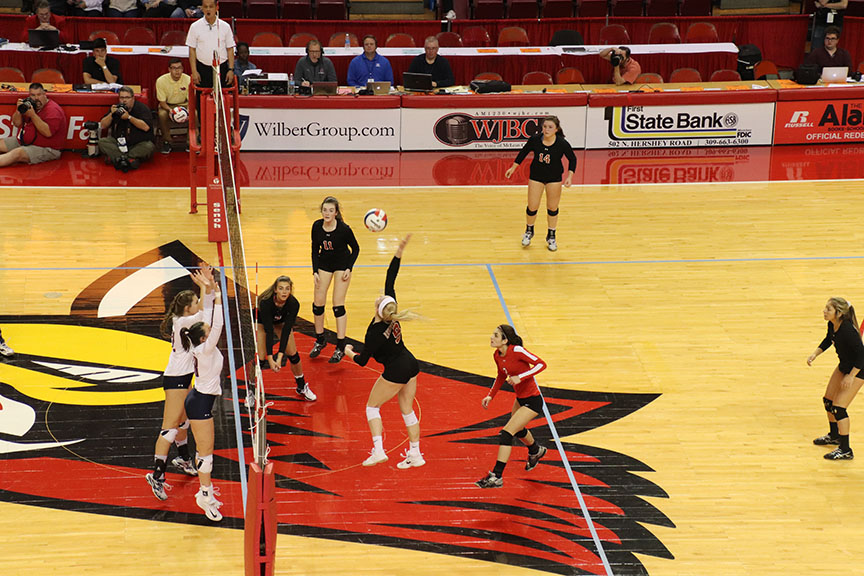 “It’s something that I’ll never forget,” Welch said about her high school career at the northwest side of Chicago school. “I miss it so much. I would go back if I could. They (her teammates and friends) all said, ‘Stay home, stay home.’ But I can’t.

“Here” is New Mexico State University in Las Cruces, New Mexico, some 1,450 miles from Chicago as the crow flies.

“I’m still a little homesick,” said Welch, the daughter of Kim and Chuck Welch and whose older sister, Samantha, is a sophomore at Butler University in Indiana. “It’s a big adjustment.”

“But I like the coaches, I like my teammates and it’s a beautiful campus,” she added. “It makes me feel very welcome.”

However, New Mexico offers little in the way of relief from the heat. The average July temperature in Las Cruces is 95 degrees.

“It’s pretty hot here, but the humidity is a lot less so it doesn’t feel as hot as it has been in Chicago,” Welch said.

Welch, who had 329 kills to lead the Bandits to a 34-9 record and the state Class 3A championship match against Belleville Althoff last fall, joined her new teammates a week ago. Open gyms, weight lifting and conditioning are regular parts of her routine.

“They want me to get a little more hefty,” she said. “I guess I’m a little too skinny right now.”

But it was Welch’s height – she’s 5-foot-9 – not her weight that played a pivotal role in her athletic career. Forced to quit gymnastics due to her stature, she turned to volleyball as an eighth grader and graduated as one of the top volleyball players in Illinois.

Yet despite her many accolades, weekly honors and all-tournament team appearances, including a selection to the Illprepvb.com all-state team, Welch did not always garner as much attention as some of the other members of the Class of 2018.

“Our (club) team wasn’t really the greatest,” she said. “There were other teams a lot better. They were getting a lot more attention. But if you’re a good enough player, you’re always going to get the attention you deserve. I think that’s what I got.”

Welch certainly did not escape the attention of New Mexico State coach Mike Jordan, a Pekin, Illinois, native who will be chasing his 500th career win and eighth NCAA tournament appearance in his 21st season at the Las Cruces campus.

“Brittany is gifted with tremendous quickness, great hops and is quite the kill machine,” Jordan said. “She goes after the volleyball a lot like (AVCA Midwest Region Honorable Mention Team member and former Aggie) Kassandra Tohm, and she’s a very good ball control player.”

The school’s winning tradition under Jordan and the players’ “team-first” attitude are two of the factors that drew Welch to New Mexico State. The Aggies have had only two losing seasons under Jordan, both coming in his first three years.

“I like the winning tradition,” Welch said. “They’re always one of the best teams. They take volleyball very seriously. I like that kind of environment a lot. The girls are also for each other and not for themselves.

“They’re really big on teamwork and helping each other out, which is what I really enjoy here,” she added.

Welch has been working out at the left side during the Aggies’ early sessions behind 6-foot senior Tatyana Battle from Albuquerque, New Mexico, who was second on the team in kills last season behind Tohm.

“They’re really expecting big things from me,” Welch said. “They’re expecting me to make a big impact on the left side and be a six-rotation player when their big senior graduates. But I really have to work hard and show that I want it.”

Meanwhile, Welch’s graduation leaves a void at Resurrection that will be difficult – if not impossible – to fill.

“Brittany is one of my personal heroes and role models because she never gave up on her dream,” Resurrection coach Mike Sopocy said. “Because of her strength and passion, I found motivation to be the best coach that I could.

“Most importantly, she pulled out my inner strength making me a better coach and I can’t emphasize how much that means to me,” he added. “Even when things got difficult for her, she never threw in the towel.”

And became what Sopocy called “one of the biggest steals” of the Class of 2018.