Skip to content
You are here
Home > Stories > Babicz gone, but Barrington still has some pop 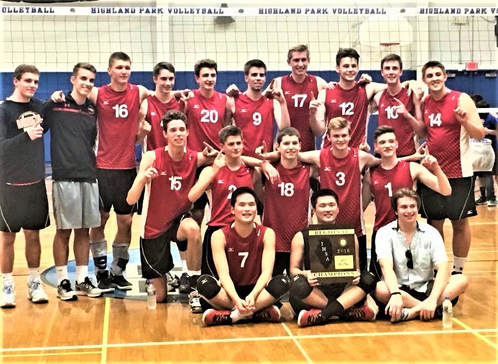 Since 2000, Barrington has become one of the dominant programs in the northwest suburbs, winning eight regional titles and qualifying for the state quarterfinals twice, finishing second in 2005 and third in 2012.

Gone from that team is 6-foot-6 middle hitter Josh Babicz, a freshman tight end at Football Championship Subdivision (FCS) national champion North Dakota State. Babicz was one of the top middle hitters in the state last spring, leading Barrington in kills and blocks.

But four starters do return for 13th-year coach Rob Ridenour, led by all-MSL selections 6-2 setter Evan Carroll (Pipeline 18 Swoosh) and 6-6 outside hitter Michael O’Toole (Pipeline 18 Nike), as well as 6-4 junior outside hitter Gabe Hartke (Pipeline 17 Nike), a who was named to the USAV Select Continental Team.

“O’Toole and Hartke have both gotten taller, stronger and significantly more skilled since last season, and Carroll is more physical at the setting position while understanding and seeing the game with maturity,” Ridenour said.

“If this group can commit to getting a little bit better each day, I think they will like the level at which they are playing by May,” Ridenour said. “While we are inexperienced in the middle and opposite positions, we have good athletes who are committed to getting better.”

Youth and injuries – four players went down during the final nine matches of the season – led to a 16-21 finish including a 2-7 mark in the DuPage Valley Conference for coach John Noe IV and the Falcons. Three of those seven conference losses were three-setters.

This spring, healthy and a year older, wiser and stronger, Wheaton North expects to return to the upper echelon of the conference and vie for regional and sectional titles.

“Winning at least one of our scheduled tournaments is high on our priority list,” Noe said. “We also aim to make a deep run in the IHSA state tournament.”

Among the players who could make that possible is 6-6 middle hitter Daniel Duggan (Hitmen 18 Elite), an all-DVC selection who had 217 kills, 70 blocks and 20 aces in 2017 and is committed to Division II McKendree College in Lebanon, Illinois.

Newcomer Matt Frank will be handed the reins of the offense.

One of the top middle hitters in the state, Colton Noel, is gone. But that’s about the only loss Addison Trail suffered through graduation.

Ten players, including seven who have been on the varsity for three years, are back for coach Chad Grant who guided the Blazers to a 21-17 record (3-3 in the West Suburban Gold) and a regional championship.

“We will need to spread the ball around on offense to be effective,” Grant said. “It will take a total team effort to replace the offense of Noel. There should be a lot of competition for playing time.”

Spreading the ball around will be the responsibility of 6-5 setter Jacob Grygo (623 assists, 200 kills, 150 digs, 47 blocks and 22 aces in 2017), one of the best in the business and a Division II Aquinas College recruit.

“Pudlo is physical and can play both outside and middle, but it will take him some time to get back to his normal level of play,” Grant said.

Bryan Florian (125 digs, 10 aces) will anchor the defense along with 5-9 Christopher Garcia and 5-8 junior Michael Tulke, while 6-3 John Baumgrartner should help in the middle.

“We have several different lineups that I would feel comfortable with if we had to play today,” Grant said. “It’s just a matter of figuring out who fits together best and who plays what position. As always, our expectation is to be competitive come playoff time.”

Top returnees for veteran coach Marci Maier include Carson Brandt (Hitmen 17 Elite), a 6-4 junior opposite hitter who had 110 kills and 40 blocks as a sophomore, and 6-1 outside hitter Fil Kwidzinski (91 kills, 19 blocks), who is recovering from an ACL injury suffered in football but is expected back sometime this spring.

“We are very excited about this year,” Maier said. “With Kwidzinski out recovering from ACL surgery, we kept a large team this year. We have many versatile players that can play multiple positions and that will help until we can get Fil back.

“We have our entire defensive crew back from last year, so we should be strong defensively,” she added. “We are encouraged by what we have seen so far. We hope to be balanced offensively and defensively by the end of the season.”

“Our boys are enthusiastic and excited to be a part of this new memory for the school,” Kizior said. “Their court knowledge, strategy and team collaboration have grown exponentially in the very short time we have been working together.”

“I am so impressed with the boys’ drive, dedication and willingness to learn about technique,” Kizior said. “These gentlemen have the potential to do great things just through their determination.”