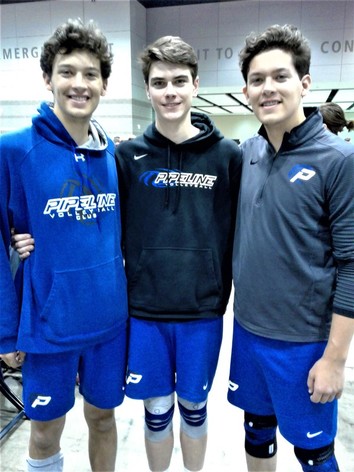 Is this the year that Glenbard West’s run of state titles ends?

You have to like Lincoln-Way East’s chances to end the Hilltoppers’ recent dominance.

And even though Lincoln-Way East graduated three-year starting setter Jake Snyder and two top hitters, this team could be even better than the 2017 edition.

“We return a very experienced team from the 2017 season,” Lincoln-Way East coach Kris Fiore said. “By the time the playoffs rolled around, we had a roster of 18 players, 13 of whom are returning.  Overall team depth will be our greatest asset.”

Back to lead Lincoln-Way East is 6-1 outside hitter and Loyola commit Ian Piet (Ultimate B18 Gold), a three-year varsity starter and 2017 Junior Olympics All-American who is coming off a high school season that featured 337 kills, 26 aces and 156 digs.

Also back is 6-6 middle hitter Mike Herlihy (Ultimate B18 Gold), another three-year varsity starter committed to Loyola who amassed 170 kills and 65 blocks while hitting .565.

But it does not end there. Wil McPhillips (Ultimate B17 Gold), a 6-4 junior middle hitter and 2017 Junior Olympics All-American, is being recruited by multiple Midwestern Intercollegiate Volleyball Association schools despite playing most of 2017 on Lincoln-Way East’s sophomore team.

Another player to watch is George Kougan, a 6-6 rightside hitter.

“This could end up being the best offensive, blocking and most athletic team that we have ever had,” Fiore said.

Mike O’Brill takes the reins in Des Plaines and inherits a strong group of veterans including 6-foot-6 middle hitter Liam Skinner, who plays for The Edge VBC and is committed to Division III Marian University in Wisconsin. Skinner had 92 kills and 82 blocks as a junior.

“We are returning a lot of players from last year’s team and have a talented junior class joining,” O’Brill said. “With our experience and new talent, we expect to be highly competitive in many of our matches this season, especially in a tough conference.”

Maine West did not win a game in the tough Central Suburban North last year but figures to make some noise in 2018.

Nick Mraz begins his fifth year as head boys coach at Lockport after leading the Porters to a school-record 31 wins last season, including a 20-game winning streak and a regional championship appearance against Lincoln-Way Central.

“Following a 30-win year is never easy, but the senior leadership that is returning can certainly get us back to that level,” Mraz said. “I expect us to find similar success and battle for a regional championship at the end of the year. It will all depend on how quickly the returning varsity guys can gel with the eight to 10 newcomers.”

Lockport returns one of the top players in the state in the versatile Anthony Pfeiffer (SPVB B18 Lenny), a 6-5 setter/opposite hitter, who is a four-year varsity starter and the team’s most valuable player each of the last three years. As a junior, Pfeiffer had 248 Kills, 336 Assists, 56 Aces, 151 Digs, 29 Blocks and a .348 kill percentage.

“Those three will be six-rotation starters and look to produce in the same way they did last year,” Mraz said.

St. Rita graduated its top two kill leaders from last year’s 18-19 team that went 5-3 in the Chicago Catholic League Blue and won a regional championship before falling to Brother Rice in the sectional semifinals.

But coach Brian Hagen expects the Mustangs to be much better defensively and at the setting position in 2018.

“We should again be in contention for the Catholic League title and a run in the state playoffs,” Hagen said. “There will be several position battles to match the talent and depth that can make us one of the more competitive teams in our area.”

The Mustangs will reload around 6-2 junior setter Joseph Horn, 5-10 outside hitter Michael Mitchell and 5-11 rightside/outside hitter Charlie Selke. Newcomer Paul Miller, a 6-10 senior, should occupy a lot of room in the middle.

“Joe Horn should be one of the better and more physical setters around and Mike Mitchell and Charlie Selke highlight what should be a formidable defense,” Hagen said.

Deerfield is always among the top teams in the state and 2018 should be no different. Veteran coach Eugene Chung welcomes back a pair of three-year varsity starters and club teammates in 6-2 middle hitter Jake Shapiro and 5-10 setter Caedon Hsieh (Adversity 18 Purple).

Shapiro was co-Central Suburban League North player of the year in 2017, and he and Hsieh will be joined by some big and talented newcomers.

“I know we have a very competitive sectional this year (Libertyville, Stevenson, Barrington and Warren among the better clubs), but we hope to make some noise as we haven’t been to sta
te since 2013,” Chung said.

2017 was another banner season for coach Jon T. Kulesza and the Demons, who went 24-8 overall, 5-5 in the Central Suburban North and won their second regional championship in three years.

But Kulesza will have his work cut out for him this spring.

“We return one starter from last year,” he said. “We will be inexperienced but athletic.  It will take time for us to develop, but I like the potential of this group.”