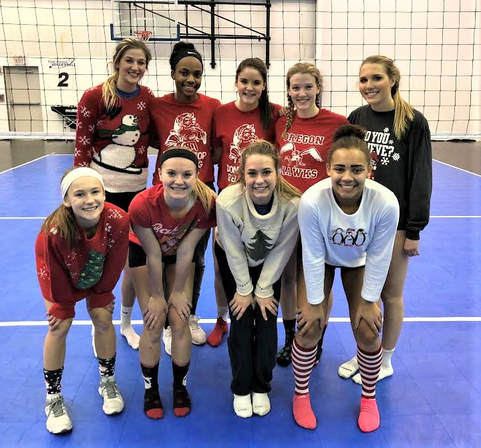 Most of the members of that team, including Geneva’s Grace Loberg (Wisconsin), have graduated. But that does not mean that the club is not ready to defend its Power League title.

“This season’s 18 Red team is full of kids who are committed to playing at the next level,” said Club Fusion’s Mike Bui, who led Harvest Christian to a fourth-place finish in the IHSA Class 2A tournament during the high school season.

As 17s, Fusion Red finished 13th in the Great Lakes Power League 18 Super Open division. But some of the faces have changed since last year.

“This will be the first time this team is playing together in club for the most part, as they were playing on different teams last year within our club,” Bui said.

Joining them will be 6-4 outside hitter/opposite hitter Klaudia Sowizral of St. Charles East, who is headed to UConn in the fall, and 6-2 middle blocker and University of Miami recruit Maya Sullivan of Rosary.

“Graham and Sowizral are both very experienced club/high school players, and Sullivan was the most valuable player of the Illinois All Star game,” Bui said.

“Ball control and defense should be the strong suit of this team,” Bui said.

Fusion 17 Black, hailing from the club’s Marengo location, finished 14th in the 18 Super Open division last year. Many of those same players return as 18s and will try to move up the standings in 2018.

Fusion 18 Black boasts two players each from St. Charles North and DeKalb high schools, the latter reaching the Class 4A regional finals before losing to the North Stars.

Team members include Lauren Caprini, an uncommitted 5-7 libero, and 5-5 uncommitted defensive specialist Megan Dawrant, who both toiled for St. Charles North during the fall.

Other team members are 5-9 outside hitter and University of Tennessee-Chattanooga recruit Gylian Finch of Oregon and 6-4 uncommitted rightside/outside hitter Erin McNeil of Prairie Ridge.

Kimmy Hammond, a 5-6 uncommitted defensive specialist from Johnsburg, and 5-11 middle blocker and Chicago State University recruit Kayla Malec of Richmond-Burton round out the roster.

“Fusion 18 Black will be a very dynamic and versatile team,” Bui said. “Defense and a fast tempo/complex offense will be this team’s strengths this upcoming season.”

For more information about the Great Lakes Power League, go to https://www.advancedeventsystems.com/EventResults/(S(2glcvx55qnyyndiqqctvd055))/Standings.aspx?e=PTAwMDAwMTM3MDI90&d=60254.