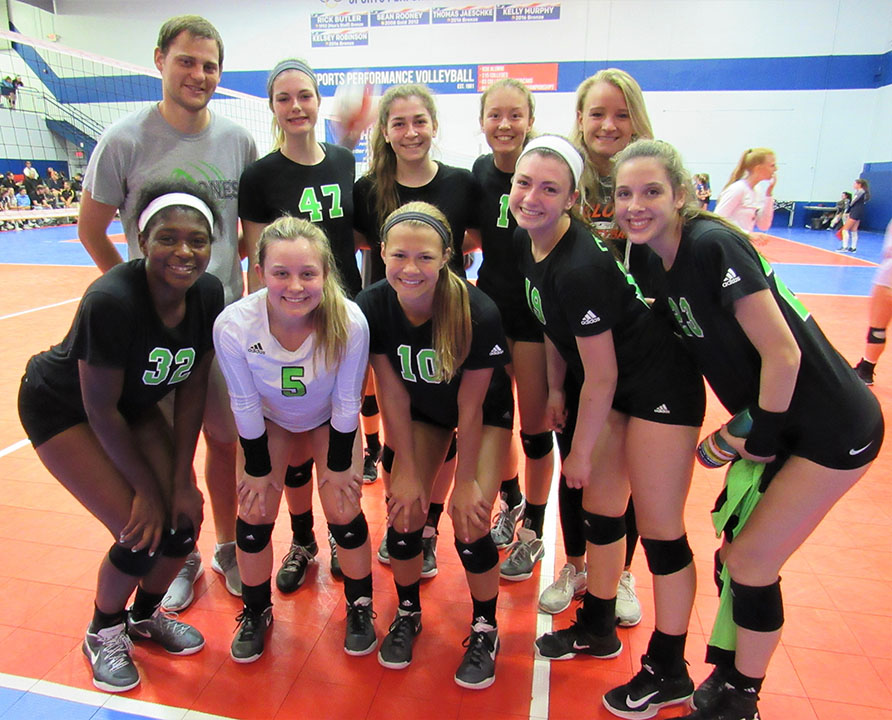 The 18 GLC Pre-Nationals Tournament in Aurora this weekend is one final opportunity for local teams to face live competition ahead of the AAU Girls’ Junior Volleyball Nationals in Orlando, Florida June 16-28.

But not everyone competing at the Great Lakes Center this weekend is doing so with the AAU tournament in mind.

“We’re not going to AAUs,” said Cyclones 16 Black Adidas coach Michael Schwerdtfeger, whose team will compete in the 2018 Asics National Jr. Volleyball Championships next weekend at Navy Pier before packing it up for another year.

Cyclones Volleyball Club out of Aurora was founded by Tolis Koskinaris, boys varsity head coach at West Aurora and head women’s coach at the College of DuPage. The club’s 16 Black Adidas team is comprised of girls from Aurora and the western suburbs.

However, the team started 7-9  in the Great Lakes Power League 16 Super Open division, tumbling into Brackets C and D before rallying to finish 14-10.

“We’ve had some struggles throughout the year,” Schwerdtfeger said. “We had some injuries. We have some injuries right now. It’s definitely showing, but the girls aren’t letting it affect them.”

Cyclones 16 Black Adidas is competing this weekend without the services of six-rotation outside hitter Grace Franz from Kaneland. Saturday, the team sandwiched wins over Kairos Elite 16 Adidas and Vision 16 Indy Elite around a loss to 1st Alliance 16 Red.

“We’ve definitely gotten a lot better across the board … every single position, every single player,” Schwerdtfeger said. “I’m really happy with how they’ve grown throughout the year. We still have to get to that top level, but if everything was perfect, what would you need a coach for?”

Riggs is filling in for the injured Franz this weekend.

“Ava is a great utility player who’s stepping up her role this weekend,” Schwerdtfeger said. “She realized what was going to happen during practice, but she’s doing great job stepping up when needed to playing a position she’s out not all that super comfortable with.”

One player who has made tremendous strides this season is Myers, who just recently completed her freshman year at West Aurora.

“Chloey has gotten a lot better throughout the year,” Schwerdtfeger said. “Earlier in the year, she was making some youthful mistakes. But she’s getting used to her body more, she has more control, and we’re starting to see that big jump we expected to see throughout this year.”

No matter what happens this weekend, Cyclones 16 Black Adidas is eyeing the prize at Navy Pier next weekend.

“That’s the plan,” Schwerdtfeger said. “We’ve taken some bumps and bruises throughout the year, but we hope to end the year playing our best volleyball.” 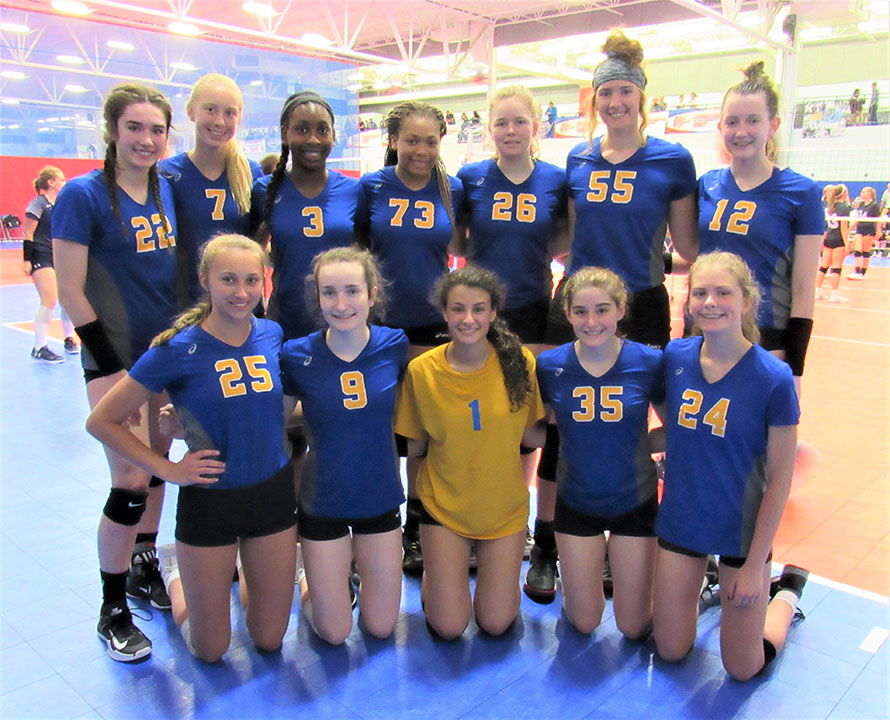 Ultimate G16 Gold will be heading to Orlando in two weeks, but the girls from the Frankfort-based club will not be competing in the 16 Open division.

After competing in the 16 Super Open division at the Great Lakes Power League this winter and spring, where they went 10-14 and wrapped up play in Bracket D, Ultimate G16 Gold take a step back and participate in the Club division at AAUs.

“That’s the plan,” Ultimate G16 Gold coach Marco Quintana said. “We played open most of the season not only for the competition, but also for the looks college coaches are able to have.

“We should and we expect to do better when we go to Orlando and play Club,” he added. “That’s the expectation.”

Ultimate G16 Gold had a rough go of it Saturday, losing to Uno Girls 16 Elite and SPVB 16 Elite in straight sets after dropping a tough 25-15, 18-25, 15-9 decision to Rockwood Thunder 16 White in its tournament opener.

“What happened (against Rockwood Thunder) is who’s going to show up, it’s about having the right mentality when you’re in tough situations,” Quintana said. “That’s the key. Throughout the middle of the season we talked about execution, about making sure we’re in position to execute.

“We had an opportunity (in the third set against Rockwood) where there was a down ball that fell between two of my best defenders, and then we had three shanks after that,” he added. “It’s about taking advantage of opportunities when we have them.”

Hoping to take advantage of their opportunities in Orlando are 6-3 middle blocker Emily Kleffman and setter Addy Sopko of Tinley Park, 5-9 defensive specialist Allison Faoro of Homewood-Flossmoor, and 5-5 defensive specialist Shedda Sulieman and 5-9 outside hitter Ella Pelen of Lemont.

“Isabella (Biesterfield) is playing well and Kayla (Schroeder) has come into her own, but the one who has really impressed me is Emily (Kleffman),” Quintana said of his all-16s Power League selection.

“She’s tall (6-3), she moves well across the net, and she’s playing right side to give us some additional blocking out there,” he added. “She’s put in a lot of work. She’s a great kid. You can see the progress that she’s made throughout the year.”