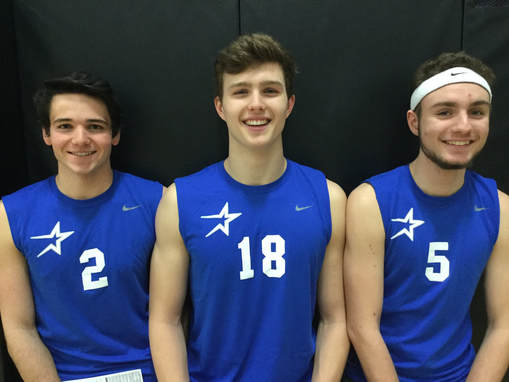 JT Ardell was cut from his junior high school team. Now the 6-foot-10 Pepperdine recruit will be counted on to lead Glenbard West to its fourth consecutive state title.

Ardell (SPVB 18 Elite) is one of only two returning starters for coach Christine Giunta Mayer – the other is 6-6 outside hitter Stone Metz (SPVB 18 Elite) – but as the Hilltoppers have proven, the pipeline keeps flowing.

“I’m looking forward to a new team with a lot of energy and integrity,” said Giunta Mayer, who is 335-116 during her 12-year career. “These are high character student-athletes who come to practice and work hard every day.”

Glenbard West also has a group of talented juniors who were unbeaten as sophomores.

“This team reminds me so much of the 2014 team … so much potential and getting better every day,” Giunta Mayer said. “It’s a different kind of team – not big, not small, very athletic and incredible teammates.

“It’s a lot of work, but we love a challenge and look forward to what’s to come,” she said.

“We look really good so far coming out of tryouts, and we will do everything we can to face some tough tournament teams and conference opponents,” said coach Todd Weimer, who is 176-118 at the school including a third-place finish in 2013.

“Our non-conference schedule is pretty tough as well,” he said.

Six-foot-5 outside hitter Tommy Koppang (Hitmen 18 Elite), a Pepperdine recruit, headlines a core group of four players from last year’s 20-19 team (6-4 in the Upstate Eight) that lost to Lake Park in the sectional championship.

“We have a lot of seniors this season with a great core of players who have been on two regional championship teams,” Weimer said.

“We have guys who play football, baseball, basketball, band, choir and juggle their club season,” Weimert said. “So it’s nice to have a great mix of guys. They are hard-working, open and ready to give their best.”

Last spring, Glenbrook South was 1 point away from knocking off New Trier and advancing to the sectional championship match.

“We are looking to improve upon that result this year,” said 15-year Glenbrook South coach Tim Monahan, whose team finished 27-11 in 2017 including an 8-2 mark and second-place finish in the Central Suburban South. “We return almost our entire starting lineup.”

“We look to build as the season goes on and have a strong showing in the very tough CSL South,” Monahan said.

Niles West went 26-12 and won a regional title in 2014. Coach Drew Roche hopes to return the Wolves to the same level of success in 2018.

“We return most of our players from last year,” said Roche, who lost only three players to graduation. “Our hope and expectation is that we take a big step forward this year and contend for a (Central Suburban South) title.”

Top returnees for Roche and the Wolves are 6-4 outside hitter and four-year starter Nikola Dimitrijevic and 5-11 sophomore setter Kyle Moy.

The Redhawks placed second at the Marist and Benet invitationals, fifth at the Brother Rice Smack Attack and 10th at the Tiger Classic hosted by Wheaton Warrenville South.

Roger Strausberger’s 2018 crew will be stronger and more mature with four returning seniors as key contributors.

Leading the way will be 6-5 outside hitter John Davis (SPVB 18 Alpha) and 6-4 middle hitter Felix Egharevba, who plays outside for SPVB 18 Elite. Both are three-year starters. Also back are 6-1 setter Tim Folliard (SPVB 18 Charlie) and 6-2 rightside hitter Tanner Stefani (SPVB 18 Delta).

“I believe this to be one of the stronger teams we’ve had, and hope to have a fun season,” Strausberger said.

Oak Park-River Forest finished 25-9 (fourth in the West Suburban Silver at 3-3), winning regional and sectional championships before falling to Lake Park 27-25, 25-17 in a state quarterfinal.

Head coach Don August begins his 13th season at OPRF having to replace three of his top four attackers and his setter.

“We are young and expecting strong contributions from a number of juniors in their first varsity season,” he said. “If we stay healthy and can play with some degree of consistency, we have the potential for a very successful season.”

Senior 6-7 middle hitter Ben Taubman and 6-4 junior Kyle Rasmussen will be expected to play bigger roles on offense, while junior libero Mike Perla, who had 68 digs and 18 assists in 2917, will anchor the defense.

“This is perhaps the most athletic team ever at OPRF,” August said. “All of our primary players have significant club experience, which should help our season get off to a strong start.”

Head coach Jim Neill returns only one player from that team – 6-3 middle hitter Will Heneghan, who had 33 kills in a part-time role last spring but will set and hit rightside for St. Viator in 2018.

“We are going to be extremely young with hardly any club experience,” Neill said. “I’m hoping for a .500 overall record and a .500 conference record. I’m also hoping for a tournament win this year.”