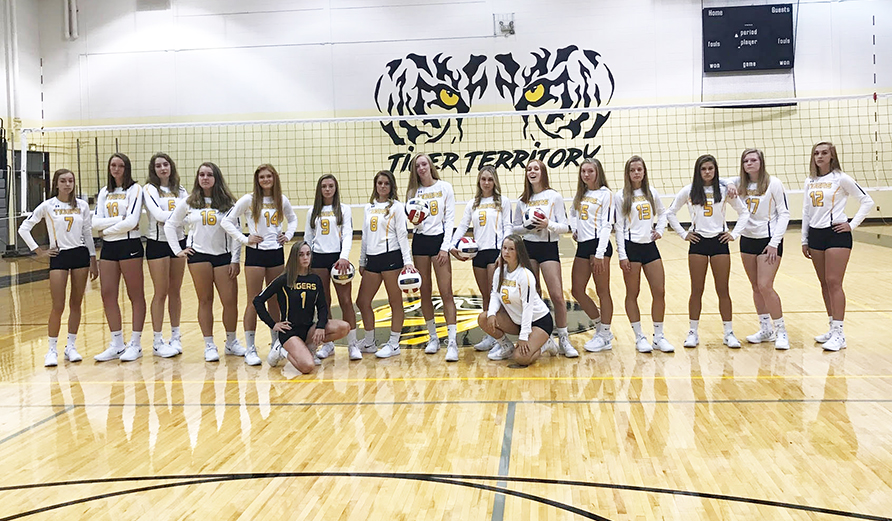 The Herscher Tigers dropped down to Class 2A this fall, which could mean trouble for other area small schools.

School: Flanagan-Cornell
Conference: Heart of Illinois
Head coach: Joe Estes
Last season’s highlights: 17-14 overall, 8-7 in conference, won third consecutive regional title, lost 20-25, 25-22, 25-21 to Lexington in a Class 1A sectional semifinal.
Top returnees: 5-8 junior outside hitter Regan Reed (145 kills, 256 kills), 5-11 junior middle blocker Kayla VanWeelden (132 kills).
Coach’s quote: “We’re optimistic. We play in a tough conference that gets us ready to compete in the state tournament.”
Outlook: The Heart of Illinois Conference features small-school powerhouses like Hailey Flowers-led Eureka, Deer Creek-Mackinaw and (Downs) Tri-Valley, which are all classified 2A by the IHSA for purposes of the state volleyball tournament. So when the Falcons compete against schools their own size in Class 1A, their schedule begins to pay big dividends.

School: Herscher
Conference: Interstate Eight
Head coach: Joel Huizenga
Last season’s highlights: 18-18 overall, 9-2 in conference (second place), lost 25-19, 25-16 to Providence Catholic in a Class 3A regional final.
Top returnees: 5-10 junior outside hitter Claudia Huston (230 kills, 210 digs), 5-7 senior outside hitter Megan Berns (114 kills, 75 digs, 25 aces), 6-0 sophomore middle blocker Mady Offerman (138 kills, 31 blocks), 5-3 senior setter Chloe Chavers (310 assists, 26 aces).
Top newcomers: 5-2 junior libero Olivia Ruder, 5-5 junior rightside hitter Anna Cotter.
Outlook: Manteno, led by Kaycie Wenzel, is the favorite in the Interstate Eight and could be in the mix for a Class 3A sectional final appearance. However, Herscher dropped to 2A from 3A a year ago and should challenge Beecher and Kennedy Bauer-led Watseka in the Class 2A state tournament.
Coach’s quote: “This season really depends on how we come together as a team. We have all the tools in place to improve upon our finish from last year. We have great depth at every position. I expect to challenge for a spot in a Class 2A sectional.”
Did you know, Part I? Junior outside hitter Mady Rogers, one of the top five runners on Herscher’s cross country team that finished fourth in Class 1A in 2017, decided to focus on volleyball this fall.
Did you know, Part II? Senior middle blocker Mattie Brown, who has not played volleyball since seventh grade, has been an all-area soccer player for the past three years and an all-area basketball player for the past two. She broke the school’s goal scoring record two-thirds of the way through her junior season.