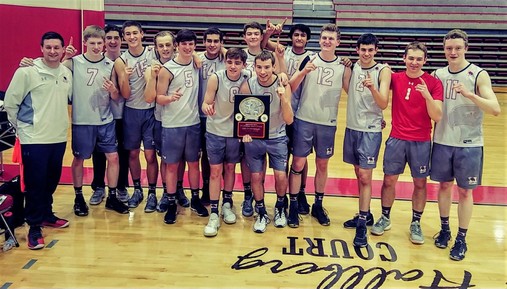 Marist has put itself squarely in the mix.

Behind a monster match for tournament MVP Marty Jepsen, the RedHawks toppled three-time defending state champion Glenbard West 18-25, 25-20, 25-19 on Saturday in the title match of the Brother Rice Smack Attack at St. Xavier University in Chicago.

With its ninth win in a row, Marist (19-3) has put itself right in the state title conversation when the postseason opens a month from today.

“Marist is a solid team,” Glenbard West coach Christine Giunta-Mayer said. “They are the poster boy for how to serve and serve-receive. Kudos to them. And (Jepsen) is outstanding. He’s one of the best I’ve seen and there’s not a hole in his game. He tore us apart and is a crafty hitter.”

The loss ended a 15-game win streak for the Hilltoppers (16-2). That was due in large part to Jepsen, who finished with 18 kills, 12 digs and a pair of well-timed aces.

“Playing a great team like Glenbard West, you have to be as aggressive as possible but consistent at the same time,” Jepsen said. “It’s a complete team effort. Everyone has each other’s backs, and we’re working as hard as we can to keep improving.”

The RedHawks showed improvement after the opening set. Down 7-4 in Game 2, Marist coach Jordan Vidovic called a time out and his team responded with a 6-1 run to take the lead. Ahead 14-13, senior middle Pat Mahoney mashed a pair of kills and Jepsen had an ace in a 4-0 burst that give Marist a 5-point cushion.

The Hilltoppers never got closer than 3 points the rest of the set. Jepsen, a junior outside hitter, had 6 kills in the set, including the game-winner.

“We just had to forget about that first set and go back out after it 100 percent,” said Mahoney, who had 7 kills and 3 blocks in making the all-tournament team. “This (win) says that anyone can beat anyone. Anything can happen. But we know as long as we fight and play as a team, we can come out on top.”

In the third set, the RedHawks jumped out to a 4-0 lead before Glenbard West came back to lead 6-5. Two kills by sophomore outside hitter Jake Bonnett (7 kills, 3 blocks) sandwiched around a pair of aces from Mahoney gave Marist a 9-7 advantage.

Ahead 15-14, Jepsen had another ace to highlight a 4-0 spurt as the RedHawks started to pull away. The match-winner was a dig by junior defensive specialist Brendan Chausse that landed on the other side of the net as the shocked Hilltoppers looked on.

“It’s great,” Bonnett said of winning the tournament. “There are all these good teams here, but we just keep getting better. We just have that bond between us.”

“Marty was lights out,” Vidovic said of Jepsen. “For us to have success, it’s mental just as much as it is physical. If we just keep things in consistent play, we’re a balanced team and we have the weapons. That showed in the results.”

A 7-1 spurt gave Glenbard West a 10-6 lead in the opening set and it never trailed after that. Trailing 18-11, the RedHawks rallied within 18-16 but got no closer as Stone Metz (9 kills) had a couple of kills to help end the opener.

Metz, a senior outside hitter, also made the all-tournament team. Senior middle hitter JT Ardell (6 kills, 2 blocks) had 4 of his kills in the opening set.

“It’s not an excuse anymore that we’re young,” said Giunta-Mayer, who only has three seniors on her roster. “This is a brand-new team and I’m still pretty proud of us. But we’ve got to find some focus and still have so much work to do.”

East senior outside hitter Ian Piet was named to the all-tournament team and led the way with 7 kills and 3 blocks in the third-place match. Mike Herlihy (7 kills, 3 blocks) also contributed for the Griffins (20-2).

Senior outside hitter Tom Phelan made the all-tournament team for the Crusaders (16-5), who lost to East for the third time this season.