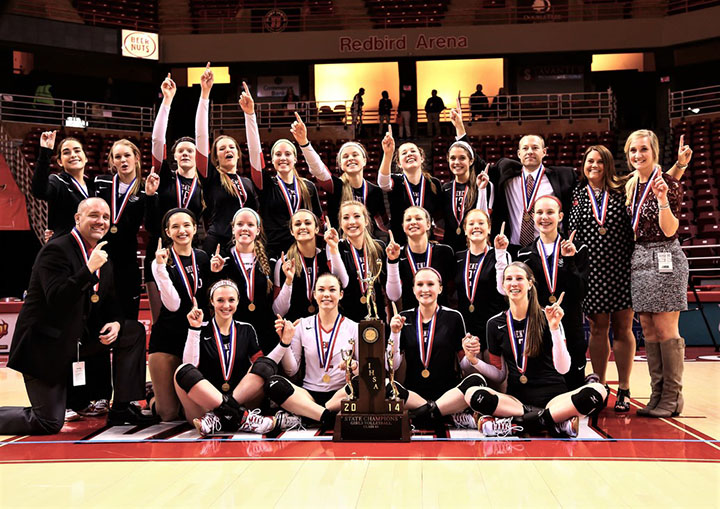 Benet is hoping to relive this scene from 2014 when it won its third state title in four years. 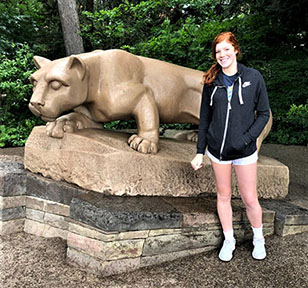 School: East Aurora
Conference: Upstate Eight
Head coach: Jennifer Wilson
Last season’s highlights: 7-23 overall (best record in 10 years), 1-8 in conference, 1-4 at Joliet Central invite, 2-3 at Proviso West invite, 1-4 at St. Viator invite and 1-3 at Illinois Math & Science Academy invite, lost 25-12, 25-9 to Lockport in a Class 4A regional quarterfinal.
Top returnees: 5-11 junior middle hitter Barakat Adekola, 5-6 senior setter Yahaira Chavez (out last season due to an ACL injury), 5-5 senior setter Karigna Trinidad, 5-5 senior defensive specialist Maria Becerra.
Top newcomers: 5-8 sophomore outside hitter Unice Astroga, 5-6 sophomore outside hitter Jade Rivera, 5-2 senior libero Erica Cervera.
Coach’s quote: “In the past years, we have not played many teams in our regional. However, this year I wanted to make sure we played a few more. I am interested to see how we will match up against them. I am excited to raise the bar with my growing group and challenge them. I am looking for a competitive season at every level, with making every team earn their points – including us. We have a solid group of athletes continuing to move through our program, now it’s a matter of them committing to the process and competing at the level they are capable of. I have high expectations of them, which I believe they also have of themselves.”
Outlook: The Upstate Eight Conference has a new look this season with four former members – Batavia, Geneva, St. Charles East and St. Charles North – joining the DuKane Conference. Glenbard East and Glenbard South should vie for UE8 league top honors, but East Aurora could move up conference ladder.


School: Freeburg
Conference: Cahokia
Head coach: Brooke Kloess
Last season’s highlights: 26-9 overall, 8-2 in conference, won Monster Mash Tournament, lost 25-13, 25-19 to eventual state champion Belleville Althoff in a Class 3A regional championship game.
Top returnees: 5-10 junior middle hitter Lexie Smith, 5-5 senior libero Chasity Hill, 5-9 junior outside hitter Caroline Gagen.
Coach’s quote: “I believe we should be a solid, scrappy team this year. We have a lot of experienced players who are skilled all the way around. Our girls work hard and are smart, so I hope that can carry us far this season.”
Outlook: Freeburg, Breese Central and Columbia typically vie for conference honors with defending Class 3A champion Belleville Althoff, Highland and Mater Dei likely lurking in the regional.

School: Hersey
Conference: Mid-Suburban East
Head coach: Nancy Lill
Last season’s highlights: 30-9 overall, 10-0 in conference, won its 15th consecutive MSL East title, defeated Fremd 25-15, 25-22 for its record 12th Mid-Suburban League championship, lost 21-25, 25-12, 25-17 to New Trier in a Class 4A sectional championship game.
Top returnees: 5-11 junior outside hitter and Boston College recruit Kati Kaburov, 5-8 senior rightside and all-conference selection Alessia Olhava, 6-0 junior middle blocker Janine Boyan, 6-0 junior middle blocker Juliette VanDenherik.
Coach’s quote: “We’re very excited to get started. We have the nucleus of our team back. We are much improved but still very young. Passing and defense should be the key to our success this year.”
Outlook: Kaburov, who was named the MSL East Player of the Year as a sophomore, is capable of dominating from the front row or back, and both middles are improved from a year ago. It’s hard to imagine anything but another 10-0 run through conference and an opportunity to add to its record MSL championships.
Did you know? Hersey coach Nancy Lill has 949 career wins on the girls’ side, and another 463 coaching boys.

School: (Carthage) Illini West
Conference: Prairieland
Head coach: Dakota Flesner
Last season’s highlights: 18-19 overall, 5-6 in conference, lost 25-8, 25-22 to Deer Creek-Mackinaw in a Class 2A sectional semifinal.
Top returnees: 5-7 senior middle hitter Gracie McDowell (235 kills, 51 aces in 2017), 5-7 senior outside hitter Hannah Wood (176 kills).
Top newcomers: 5-9 freshman middle hitter Megan Harrell, 5-4 sophomore setter Karli Artman, 5-6 sophomore outside hitter Halee Wood.
Coach’s quote: “Sisters Halee and Hannah Wood both played middle last season for our JV and varsity teams. This season, they are playing opposite of one another on varsity as outside hitters. Both players made huge position changes to complement one another and make the team better. Senior Ali Bliss was our outside hitter last season, but this season she is now dressing as a libero – a position she has never played before.”
Outlook: Changes are afoot in Carthage. Illini West graduated its top two players from 2017 – setter Kelly Sirtak and libero Mackenzie Duffy (school digs record holder) – and is joining a new conference in 2018. The Chargers will be challenged by solid tournaments at Monmouth United, Mercer County, Augusta Southeastern and Western Illinois University, and by 2016 state champion West Prairie, Farmington and Knoxville in the conference.

School: (Bartonville) Limestone
Conference: Mid-Illini
Head coach: Paloma Simundic (first year)
Last season’s highlights: 34-5 overall, 13-1 in conference, lost 25-14, 24-26, 25-23 to St. Viator in a Class 3A supersectional.
Top returnees: 5-9 senior setter/rightside hitter Laney Chiaravalle, 5-11 senior outside hitter Hannah Majors, 5-10 senior middle hitter Lily Schneider.
Top newcomer: 5-10 junior middle hitter Scotti Fisher.
Coach’s quote: “We graduated a huge senior class, but we have a lot of great seniors stepping up into roles and we have girls who have a great work ethic.”
Outlook: Gone is Brittany Robinson, a 6-2 kill machine and Butler recruit who is 13th on the Illinois High School Association’s career list with 1,510 kills. Her 512 kills last year helped lead Limestone to its first Elite Eight berth ever. Filling that void is the first order of business for first-year coach Simundic. However, every team in the Mid-Illini suffered key graduation losses, so contending for another conference title is not an unreasonable goal. 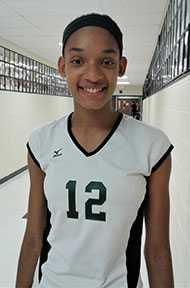 School: Plainfield Central
Conference: Southwest Prairie
Head coach: Erik Vogt
Last season’s highlights: 22-12 overall, 10-2 in conference, lost 25-17, 25-27, 29-27 to Neuqua Valley in a Class 4A regional semifinal.
Top returnees: 6-4 junior outside hitter and Minnesota recruit Taylor Landfair (pictured left), 5-8 senior libero and Alabama recruit Katie Shook, 5-9 senior setter and IUPUI recruit Regan Trueblood, 5-9 senior setter Grace Brock, 5-8 senior outside hitter/defensive specialist Isabelle Todd.
Top newcomer: 5-10 sophomore outside hitter Kerrigan Candra.
Coach’s quote: “We have a lot of upperclassmen with championship experience. This group won an astounding seven national championships with their club teams in the offseason. Taylor Landfair will be the go-to hitter on this team. Grace Brock and Regan Trueblood will be running the offense with Katie Shook anchoring the defense. Kerrigan will look to contribute on the pin with Isabelle Todd adding more ball control to this group.”
Outlook: Plainfield Central boasts one of the best attackers in the country in Landfair, who was the MVP of the 18 Open division at AAUs, and she’s only a junior. But the Wildcats also have the misfortune of being in a volleyball hotbed. Plainfield North, Plainfield East and a retooled Minooka team figure to be solid in the Southwest Prairie, while Benet, Waubonsie Valley and Neuqua Valley lurk as potential state tournament obstacles.

School: Watseka
Conference: Sangamon Valley
Head coach: Krista Pufahl
Last season’s highlights: 25-10 overall, 5-2 in conference, lost 25-15, 25-17 to eventual state champion St Thomas More in a Class 2A sectional semifinal.
Top returnees: 6-0 senior outside hitter Kennedy Bauer (376 kills, 34 aces, 261 digs, 30 blocks in 2017), 6-0 senior outside hitter Mallory Drake (150 kills, 42 aces, 216 digs), 5-4 senior libero Taylor Schippert (34 aces, 247).
Top newcomers: 5-6 junior setter Grace Smith, 5-5 freshman defensive specialist Sydney McTaggart.
Coach’s quote: “Kennedy Bauer is one of the best in the area, and I would even say she could compete in that ‘great’ category in the state.”
Outlook: It’s not inconceivable that Watseka finishes with 25-30 wins, wins an eighth consecutive regional title and advances to the sectional championship.
Did you know, Part I? Mallory Drake fishes several times a week, and if Watseka had a bass fishing team, she would likely be on it.
Did you know, Pt. II? Kennedy Bauer is the youngest of three sisters. Older sister Taylor is playing volleyball at University of Illinois Springfield and middle sister Madison is playing softball at Wabash Community College. Kennedy Bauer has received interest from both basketball and volleyball coaches.

School: Wheaton Academy
Conference: Metro Suburban
Head coach: D.A. Nichols
Last season’s highlights: 10-14 overall, 6-4 in conference, lost 25-16, 25-17 to state semifinalist St. Viator in a Class 3A regional semifinal.
Top returnees: 5-10 sophomore setter Schuyler Williams, 5-6 senior outside hitter Alyssa ­­­­­­­­­, 5-6 senior outside hitter Georgia Johnston.
Coach’s quote: “This will be one of the most challenging schedules we’ve had in my 13 seasons with Wheaton Academy. I’m confident in the effort and approach our team is going to put forth each and every time we step onto the court this season. We have a good mix of youth and senior experience that will put a talented group on the floor.”