Skip to content
You are here
Home > Stories > Lions roar in Indy, top SPVB in finals 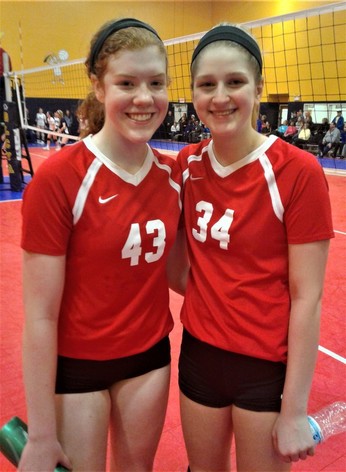 Lions 15-1’s Rachel Muisenga from Benet and Maddie Malone from Newark.
If you build it, they will come.

“It” being the Central Zone Invitational at the Indianapolis Convention Center in Indianapolis, Indiana, last weekend.

“We heard this tournament had gotten a lot more competitive and this might be the time to see where we are against other competition at this age level,” Lions 15-1 coach Courtney Keefe said.

“All the teams we played against, the girls were all very strong, talented athletes,” she added.

Lions 15-1 not only competed against some of the top 15s in the country, the girls from Western Springs proved to be the best of a loaded field.

Lions 15-1, seeded first, went 8-0 in the 15 Open division to finish first in a field of 27 teams that included 14 teams ranked in the top 50 in the country by Prepvolleyball.com.

“This tournament gave us a little bit of the answers as to what we need to work on to continue to compete against the top dogs,” Keefe said. “It was exciting to see how the girls reacted, how they responded when they were put against tougher competition.”

“That was a really good match for both teams,” said SPVB 16 Elite coach Erik Vogt, who had a ringside seat for the Central Zone Invitational championship. “The quality of play was really good.”

Keefe said that everyone of the Lions 15-1 roster stepped up in Indianapolis.

“My middles (6-foot-1 Georgiana Barr from York and 6-1 Beau Vanderlaan from Fenwick) took a bigger role on offense and defense, blocking strong hitters and making adjustments that were thrown at them,” Keefe said.

“Our outsides all do a great job for us,” she said. “Maddie (5-11 outside hitter Malone from Newark) is definitely the hardest hitter, but Nicky (5-11 Hinsdale Central product) Nedic and Kyla (5-10 Benet outside hitter Kenney) offer different shots that are very smart.”

SPVB 15 Elite had a more circuitous route to the championship match. The Sports Performance crew went three sets in its last seven matches, including a 25-27, 28-26, 15-12 win over NKYVC (Northern Kentucky Volleyball Club) 15-1 Tsunami in its first match Sunday morning.

“We’re expecting Wilson to be back full speed this weekend,” Vogt said.

“Both teams we lost to have a lot of high prospects on them,” Vogt said. “Mintonette has four kids who have committed to Big Ten schools and Legacy has three, including a 6-3 lefty setter who is deciding between UCLA, Stanford and Northwestern,” Vogt said.

SPVB 16 Elite, like its younger sibling, was minus a starter. Vogt’s team is awaiting the return of 6-1 outside hitter Gabriella Croll from Waubonsie Valley, who has yet to suit up this season due to a foot injury.

“This is probably one the best passing teams I’ve had,” the coach added. “The issue for our girls is our ability to side out. The passes were there, we’re just not getting good swings or we’re not taking good swings.”

With its two losses, SPVB 16 Elite finished tied for fifth at Indy.

“From a coaching perspective, I was really happy with the weekend,” Vogt said. “For us to be as competitive as we were, as close as we were despite being shorthanded, that’s a real positive sign.”

All three teams will be back in action this weekend when Great Lakes Power League 16 Super Open division play resumes. Ironically, SPVB 15 Elite and SPVB 16 Elite will meet in an 8:00 a.m. match on Court 1 as part of Bracket A with Lions 15-1 possibly waiting in the wings if it can get past WI Juniors 16-1 in a 9:00 a.m. match on Court 1.

“It’s going to be interesting to see how that top part of the bracket pans out,” Vogt said.