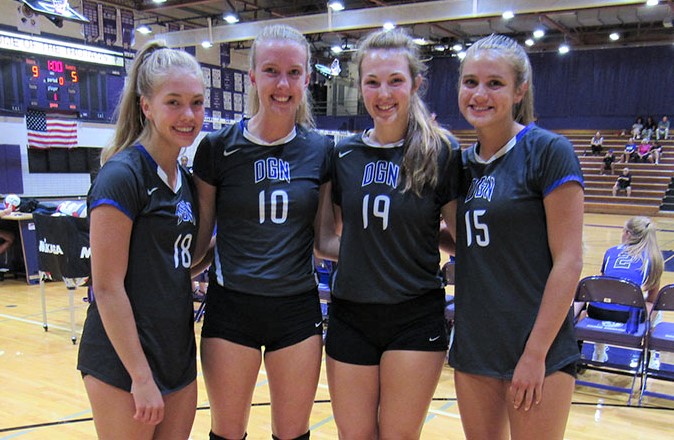 So it’s not surprising that the Spartans leaned on a couple of old reliables to push past Downers Grove North in both teams’ season opener Tuesday in Downers Grove.

“Yeah, we’re pretty OK from the outside,” Marian Catholic coach Ryan Summers said. “I did not expect Temi to start the game with three hitting errors, but everybody’s human and obviously she made up for it the rest of the match.

“I’m just going to sit on the bench and clap,” he said.

“Too many runs,” Downers Grove North coach Mark Wasik said. “If we would have won that third game, he (Summers) would have said the same thing because we went on a number of runs, too. Some of the runs they had against us were self-inflicted.”

That’s when Lauren Hatch put the finishing touches on the Spartan victory with a kill followed by an ace on match point.

Hatch has confidence in the new faces in the Marian Catholic lineup. But she is also aware that she and Thomas-Ailara will have to shoulder much of the scoring burden while the young players get up to speed.

“We do have some really good front-row players who are developing really well, so that’s exciting,” she said. “In the meantime, me and Temi got to get it together.”

Downers North was led by Margaret Mahlke with 10 kills, 5 digs and an ace. Maddie DeGiorgio added 8 kills, Jade Casper had 5 kills, sophomore libero Madison Cuchran had 19 digs and Dunlap had 24 assists and a pair of aces.

“It’s the first match,” Wasik said. “You want to hope that they learn sooner rather than later to let go of mistakes faster and execute at a higher level quicker. But nobody’s playing this level of competition right off the bat. There was no warmup matches here.”

And about those Downers North runs that sealed Game 1 and almost pulled out Game 3?