Skip to content
You are here
Home > Stories > McAuley expected to contend again; Oregon gets reinforcement 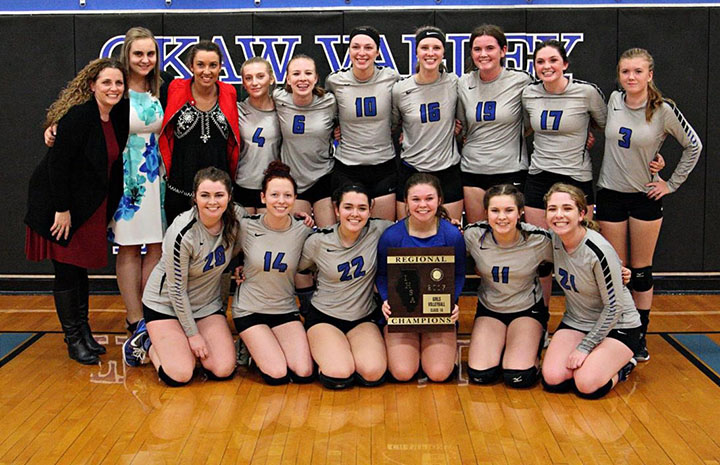 Okaw Valley won the school’s first regional championship in 2017 and is looking for even bigger things in 2018.

School: Mother McAuley
Conference: Girls Catholic Athletic (GCAC)
Last season’s highlights: 35-5 overall, 8-0 in conference, lost 25-21, 25-16 to eventual state champion Marist in a Class 4A supersectional.
Top returnees: 5-9 senior setter Nancy Kane, 5-8 junior libero Lexi Warfield, 5-10 junior rightside hitter Amia Owolabi, 5-9 junior outside hitter Alena Pedroza, 5-8 junior defensive specialist Grace Niego.
Top newcomers: 5-8 sophomore outside hitter Connie LeBel, 5-6 sophomore defensive specialist Anna Jaworski, 6-0 sophomore rightside hitter/setter Molly McDermott, 6-1 sophomore middle blocker Molly Boyd.
Coach’s quote: “While we are still a very young team (six sophomores, six juniors, five seniors), we return five starters who bring a lot of experience. I am very excited about this team. We have some very strong attackers, a great setter and a solid libero. The only piece to be decided will be our middles. We will be led by three-year starting setter Nancy Kane, who brings a wealth of experience and will be the rock for our girls. I am expecting big growth from this team throughout the season. With that being said, it may happen later than sooner, which is fine by me. Playing a tough schedule will help us in our development.”
Outlook: McAuley, which has won more state titles than any other team in Illinois (13), does not rebuild. The Mighty Macs reload. Despite their youth and the graduation of all-world Charley Niego, the Mighty Macs still figure to be right there at season’s end contending for another state championship.
Did you know? Mother McAuley was the only team in Illinois to defeat eventual state champion Marist in 2017.

School: (Bethany) Okaw Valley
Conference: Little Okaw Valley
Head coach: Sarah McDowell
Last season’s highlights: 15-14 overall, 4-3 in conference, won school’s first regional championship, lost 25-16, 25-9 to (Louisville) North Clay in a Class 1A sectional semifinal.
Top returnees: 5-11 junior rightside hitter Kate Jeffers, 5-8 junior outside hitter Paige Coleman,
5-2 junior libero April Decesaro, 5-9 senior middle hitter Kailynn Bobbett, 5-2 senior setter Sadie Zimmerman, 5-11 senior middle hitter Madison Vogel, 5-7 senior outside hitter Bella Benning.
Top newcomer: 5-6 sophomore middle hitter Macie Fleshner.
Coach’s quote: “We only graduated one senior, rightside hitter/setter Natalie Jeffers. We are developing from a young program and are looking forward to another exciting season. Due to our progress since last season, we expect our girls to be a leader in our conference and among area teams. Our players have a lot to offer and have an incredible drive inside of them to compete and succeed.”
Did you know? Junior Kate Jeffers is returning after undergoing surgery in December 2017 to correct a heart condition known as SVT (Supraventricular tachycardia) that caused her heart to beat in an irregular pattern. Two weeks after surgery, Kate returned as a member of the Okaw Valley girls varsity basketball team and played club volleyball for Prime Time Volleyball Club in Champaign.

School: Oregon
Conference: Big Northern
Head coach: Faith McNamee
Last season’s highlights: 32-5-1 overall, 10-0 in conference, won the Stillman Valley tournament, lost 25-21, 25-21 to Orion in a Class 2A sectional semifinal.
Top returnees: 5-11 senior rightside/outside hitter Bailey Nelson, 5-9 senior setter Jasmin Herbst, 5-7 senior defensive specialist/libero Makenna Sadler.
Coach’s quote: “This year, we are hoping to add a foreign exchange student to our roster. She comes to us from Germany and has many years of experience playing there. This will be the first foreign exchange student to compete with us within the last 15 or more years. We are excited to see what she can add to our program.”
Outlook: With six seniors returning from last year’s sectional semifinalist led by Bailey Nelson, and the addition of the foreign exchange student from Germany, Oregon will again compete for conference honors and is expected to make another long run in the state tournament.

School: Plainfield North
Conference: Southwest Prairie
Head coach: Matt Slechta
Last season’s highlights: 17-18 overall, 9-5 in conference, finished 12th at 24-team Plainfield North invite and Plainfield Central Fall Harvest Festival, lost 25-14, 25-21 to Minooka in a Class 4A regional semifinal.
Top returnees: 5-9 junior outside hitter Lily Summers, 5-10 sophomore middle hitter Ariel Amaya, 6-1 junior outside hitter Ali Jansen, 6-3 junior middle hitter Gretchen Ketelhut (currently out), 5-7 junior libero Mekenzie Smith.
Top newcomer: 6-2 freshman outside hitter Ella Wrobel.
Coach’s quote: “We graduated five senior starters from the 2017 season, all whom left a lasting impact on the program and their teammates. But our returnees and newcomers won six trophies at AAUs, all as starters and major contributors to their teams.”
Outlook: The indefinite loss of Ketelhut, who was a big part of SPVB 15 Elite’s third-place summer league team and its fifth-place finish at AAUs, leaves a huge void in the middle of Plainfield North’s lineup. But Wrobel, who played part of the offseason season with SPVB 16 Elite, is a huge addition, allowing Plainfield North to contend with Plainfield Central and Minooka in the Southwest Prairie and beyond.

School: Rolling Meadows
Conference: Mid-Suburban East
Head coach: Katie Stensland
Last season’s highlights: 15-22 overall, 5-5 in conference (third place), lost 12-25, 25-17, 25-23 to Hersey in a Class 4A regional semifinal.
Top returnees: 5-8 senior setter Natalie Klancnik, 5-9 senior outside hitter Elise Kowalski, 6-0 senior middle hitter and all-conference selection Eleanor Errico (school’s single-season kill leader), 6-0 senior middle hitter Leticia Avellaneda, 5-8 senior rightside hitter/defensive specialist Caroline Slowik, 5-6 senior defensive specialist Maggie Goodwin.
Top newcomers: 5-8 sophomore outside hitter Ashlyn Ryan, 5-7 junior setter/rightside hitter Erin Behls, 5-2 junior libero/defensive specialist Sophia Salemi.
Coach’s quote: “We have a large returning class with four of the players being starters on last year’s team. With that being said, we will be looking for them to bring strong leadership and experience to bring to the rest of team. We anticipated big things from Eleanor Errico this season and to continue to be an offensive leader. Natalie Klancnik has been setting on the varsity court since her sophomore year, so her ability read the court and react to different situations will be a huge benefit to our team. This team is out to compete and finish strong in the Mid-Suburban League. I know for many of those girls, the semifinal regional match weighs heavy on their minds, and they are ready to go out and be competitive and leave it all out on the court.
Outlook: Hersey has ruled the Mid-Suburban East for a decade-and-a-half.  But Rolling Meadows proved in last year’s regional semifinal that it can push the Huskies and snap their rivals’ long conference run.
Did you know? Head coach Katie Stensland is a 2009 graduate of Rolling Meadows who played collegiately at Carthage College in Kenosha, Wisconsin. “I could not be more excited to return to my alma mater to coach,” she said.