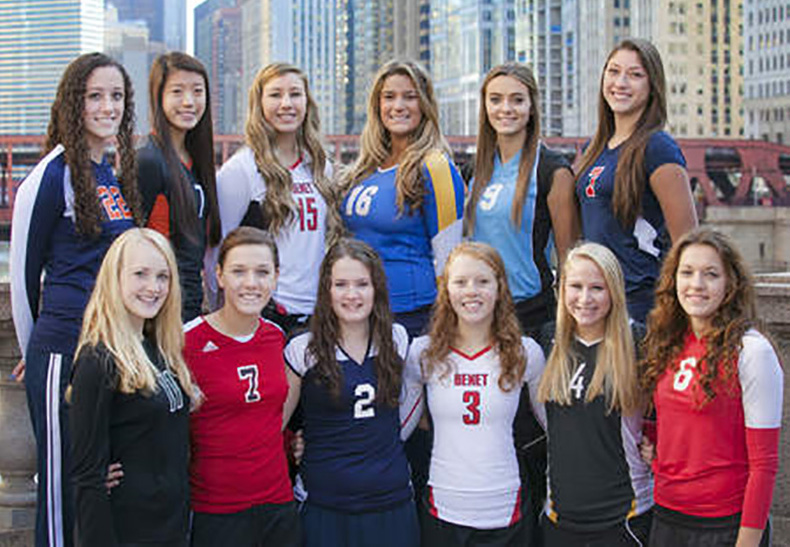 West Aurora’s Lauren Carlini (back row, far right) was a Player of the Year in 2012.

Did you know that girls were not permitted to participate in interscholastic volleyball contests until 1973?

Then during the 1974-75 school year, the IHSA sponsored its first volleyball tournament at Lantz Gymnasium on the campus of Eastern Illinois University. New Trier East won that affair, defeating Rich East 15-10, 6-15, 15-3.

Eight years later, the Chicago Sun-Tines named its first “Player of the Year” when it recognized Mother McAuley’s Eva Murray (Franco), who went on to become an All-American setter and Hall of Honor inductee at the University of Texas.

Girls volleyball has evolved dramatically during the years that followed.

New Trier East only played 17 matches the year it won its only state title. Today, teams are permitted a maximum of 35 matches including four five-game tournaments. The IHSA adopted the 25-point rally scoring system in 2003 and expanded its tournament to four classes in 2007.

Meanwhile, the Sun-Times and writers like the legendary Steve Tucker and Tina Akouris continued to name a “Player of the Year” until the newspaper dropped all high school sports coverage other than football and boys basketball in April 2015.

The last 12 Sun-Times’ “Player of the Year” honorees – stipulated as student-athletes whose schools fell within the newspaper’s circulation area – were named by Illprepvb.com’s Phil Brozynski, who was the Sun-Times’ primary girls’ volleyball beat writer during that period.

Today, Illprepvb.com encompasses the entire state and all student-athletes, no matter where they are located, are eligible for “Player of the Year” honors.

However, to ensure that the legacy of those early and subsequent honorees is preserved, Illprepvb.com has decided to reprint the complete Sun-Times’ list.