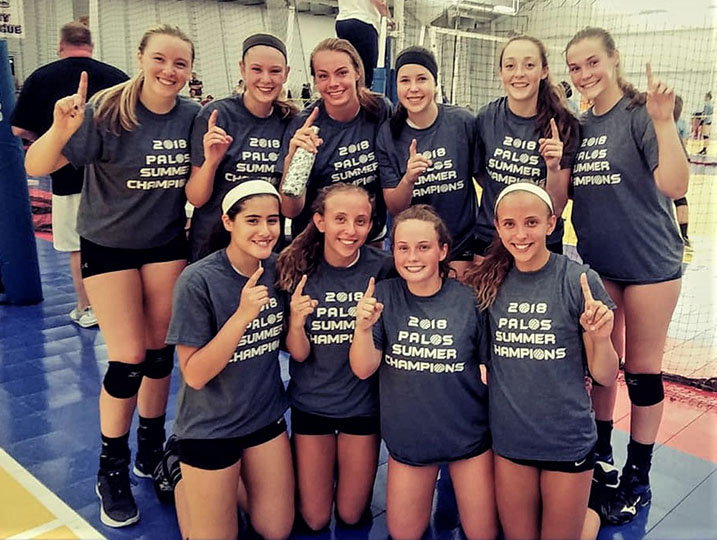 Sandburg Blue knew what to do Thursday at Palos Courts.

As he has done the past few years, Sandburg volleyball coach David Vales entered two teams in the Palos Courts Summer League.

His logic to how he divided them was simple.

“I split our team down the middle,” he said. “I’m constantly going against tough teams in the sectional, and sometimes in the past I’d go all in on the summer league. But with 10 players back from last season’s team, how would I know how well they will play together with the new group of kids if I keep them all together?”

Vales’ division of the squads certainly worked out well. They played each other for the title on Thursday at Palos Courts in Palos Heights, guaranteeing the Eagles would win their first Palos Courts Summer League title since 2011.

In the title tilt, the Sandburg Blue team defeated the Sandburg White team 25-20, 25-16. The White team entered the match undefeated (9-0) in the summer league pool play, while the Blue squad (8-1) lost once. They each won their respective pools.

But none of that mattered when the two teams tangled. While they obviously will all bond together soon to make what should be another special Sandburg season, they were certainly going at each other for the bragging rights Thursday night.

“It was really fun, and beating them made it more enjoyable,” said Blue team junior outside hitter Shelby Stefanon, who is one of the 10 returners. “It was super competitive. We would talk to each other from across the net out there.

“It will be really something to see when we do (get the teams together) and see where we can be,” she added. “We have a lot of potential.”

Returning junior libero Rachel Krasowski also helped the Blue team pretty much dominate the match. The first set was tied at 20-20, but Blue scored the final 5 points. In the second set, the Blue squad raced out to a 16-7 lead and the White team never got closer than 8 points after that.

Senior Rachel DeFries is stepping in at setter and Erica Staunton will be a big key. Staunton, a senior outside hitter, smashed the final two kills in the semifinal match as the White team edged an up-and-coming Lockport team, 25-19, 22-25, 15-13, to advance to the final.

“We accomplished what we set out to do,” Vales said of mixing the teams. “To win the championship is a bonus. But overall (this coming season), we could be better than last year (29-9).”

Another team that could be better than a year ago is Lockport. The Porters only return two seniors from last season’s squad that went 24-12. Four seniors decided not to return.

But there’s plenty of young talent coming up. That showed as after the tough loss to Sandburg White, Lockport defeated Shepard 25-15, 25-21 for third place.

“We have some strong juniors,” Lockport senior setter Hannah Pacheco said. “We wanted to beat Sandburg. That was our goal. But we look forward to playing them during the season. I don’t think (teams in the Palos Courts Summer League) were expecting the hitters we have.

A top hitter for the Porters will be junior outside Morgan Schmutzler. Their only senior other than Pacheco, Jill Hook, moved from an outside last year to libero this season. Lockport went 7-2 in pool play, but upset the Lincoln-Way East Blue team that went 8-1 in pool play, 25-22, 21-25, 15-11, in a quarterfinal match Tuesday.

Shepard (7-2 in pool play) was still happy to get to the final four of the tourney.

“We played really well this summer,” Shepard coach Brian Zofkie said. “We have a lot of experience coming back from last year’s (24-12) team. We only graduated one senior, and we’re excited and expecting big things.”