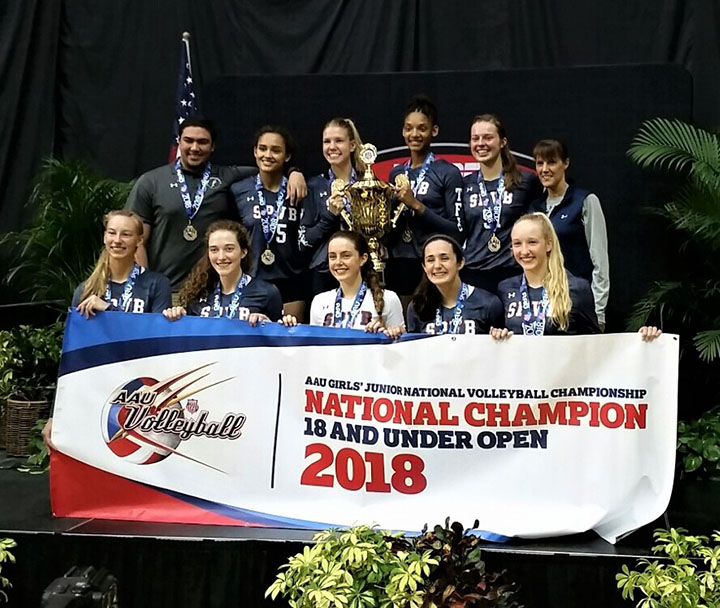 Author Alan Lewis once said, “If at first you don’t succeed, get a bigger hammer.”

Sports Performance 18 Elite didn’t get a bigger hammer. It got a pile driver.

After snapping Asics Munciana 18 Samurai’s 56-match winning streak in Round 3 of Gold pool play on Wednesday, the crew from Aurora beat the defending national AAU champions a second time 24 hours later, 25-23, 12-25, 15-11, to win the 18 Open division championship of the 45th AAU Boys and Girls Junior National Championships in Orlando, Florida.

“At this point of the season, it’s all about how you’re going to finish and having to go through those bumps and bruise,” SPVB 18 Elite assistant coach Seth Salmon said.

“Whether it was jitters, nervousness … as ugly as those first two days were, you just have to keep trying to push through and play clean enough volleyball to stay in contention for a medal,” he added.

SPVB 18 Elite not only stayed in medal contention, it walked off with the biggest prize of them all.

The national title was the fifth in six years for SPVB 18 Elite and the eighth overall in 2018 for Sports Performance in Orlando. The club also claimed titles in the 18 Premier, 18 Classic, 16 Classic, 16 Aspire, 15 Open, 15 Premier and 15 Aspire divisions.

Sports Performance claimed four of those titles Thursday, but none was bigger than the one that came at the expense of Asics Munciana 18 Samurai, by some accounts the best 18s team in the country.

“We knew that since we were the first 18s team that beat them, the second time around when we punched they would punch back even harder,” Salmon said. “We knew they would come at us harder, serve tougher, hit harder and be more aggressive.

“We stuck to our game plan of hitting our serving zones so we could set up our blocking, get a dig and get a good, aggressive attack,” he added. “We didn’t just want to defend. We wanted to attack them just as hard as they attacked us.”

SPVB 18 Elite’s 6-foot-4 outside hitter Taylor Landfair from Plainfield Central was named MVP of the 18 Open division. She was joined on the All-American team by teammates Emmy Barnhorst, a 6-3 middle from Wheaton North, and 5-8 libero Grace Kloss from Waubonsie Valley. 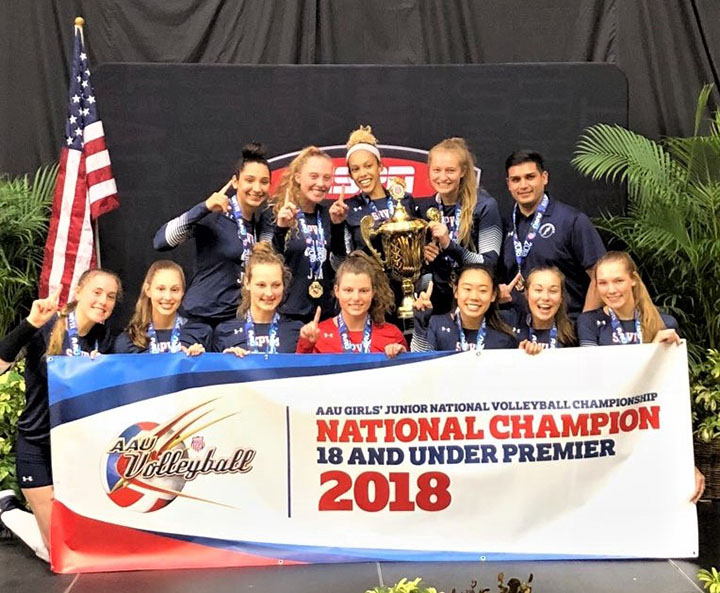 Alison Jennings, a 6-foot middle hitter from Oswego East, and Sarah Kushner, a 5-10 outside hitter from Naperville North, were also named to the All-American team.

SPVB 16 Blue’s Quiara Dunson, a 5-foot libero from Plainfield Central, was named MVP of the 16 Classic division. Joining her on the All-American team were teammates 5-11 middle hitter Rianna DeMyers from Waubonsie Valley and 5-9 outside hitter Amee Beedle from Wheaton North.

Other members of the 16 Classic championship team are 5-7 defensive specialist Anna Hyde from Wheaton Academy, 5-10 outside hitter Annika Altekruse from Metea Valley, and 5-8 setter Elizabeth Wirth from Keith Country Day.

SPVB 16 White’s Trinity Evans, a 5-8 outside hitter from Waubonsie Valley, was named MVP of the 16 Aspire division. She was joined on the All-American team by teammates 5-7 libero Jessica D’Ambrose from Addison Trail and 5-9 outside hitter Aidan Brown of Sterling Newman Catholic.

“They (OT 16 S. Roberto) might be the top team in the country,” SPVB 16 Elite coach Erik Vogt said. “They don’t have that many deficiencies as a team. The things we had been doing all week we didn’t do well (in the championship match).”

Other Illinois teams that finished in the top 10 of their respective divisions Thursday were: Club Fusion 18 Black and Wildcat Jrs. 18 Black, tied for fifth place in the 18 Premier division; and 1st Alliance 16 Silver, tied for ninth in the 16 Open division.