Skip to content
You are here
Home > Stories > Williams, Newark turn back Hartsburg-Emden to win Class 1A championship 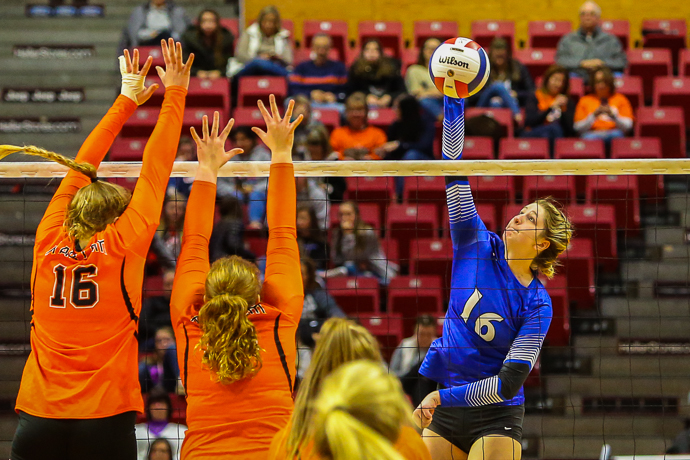 Newark’s Madi Malone puts down one of her 11 kills during Saturday’s Class 1A championship match at Redbird Arena. (Photos by Dave Ruggles)

NORMAL – When Hartsburg-Emden tied the second set of Saturday’s Class 1A championship game at 23-23, Newark’s 6-foot freshman outside hitter Megan Williams was ready.

“I knew I was going to have to go in for one more play,” Williams said. “I felt confident in myself and in the passes that Meggie (Scott) was having. I knew it was going to get up to Olivia (Nelson), then whether it was me or Mattie Chapman … it was just like a dream.”

Williams tooled a kill off the Hartsburg-Emden block to put the finishing touches on the Lady Norsemen’s 25-16, 25-23 victory and first-ever state championship. Williams finished with 9 kills for Newark (40-2), which placed fourth in 2017.

“These girls went out and took this match like nobody’s business,” said Newark coach Tonya Grayson. “Talk about stepping up on the biggest stage and the biggest moment. They were calm, cool, collected, all about business.

“We put smackdown on them in set one, had to withstand a couple runs in set two, but there are no words to describe how proud I am of this team,” she added. “Even when they made a little run on us or got within 1 or 2 points or even tied it up, they were so calm.” 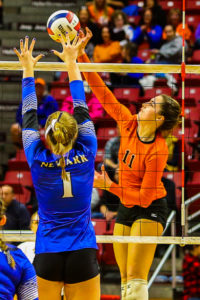 Of course it helps to have the best player in Class 1A on your side. Six-foot sophomore Madi Malone led Newark with 11 kills, winning her head-to-head duel with Hartsburg-Emden’s Memphis-bound senior Anna Hayes (9 kills, 6 digs).

Malone closed out Game 1 with a kill, but Hayes & Company rallied from a 19-13 deficit in Game 2 and pulled even on a kill by Alaina Bradburn and back-to-back hitting errors by Newark. The Stags served short on the next point, setting the stage for Williams’ heroics.

“Actually, we played horrible the first time we played, so this was a lot better,” said Hartsburg-Emden coach Jennifer Hayes. “Unfortunately, the conclusion was the same. Newark did play well. They were able to block and get hands on our offense, and they were able to run their offense a lot better than we could.

“I thought we played great defense,” she added. “I thought we had a great game. It just wasn’t good enough. “

Decatur St. Teresa used a 9-0 service run by 5-9 junior setter Cami Lobb to break a 9-9 tie in Game 1 then opened the second set by scoring the first 6 points to claim third place over Grayville.

Grayville (27-10), the second smallest school in the state finals field with 86 students, got 7 kills and 5 digs from 5-7 junior Sidney Foster, 4 kills and 6 digs from Macy Knight and 1 kill, 6 assists and 4 digs from senior Carsyn Robinson.