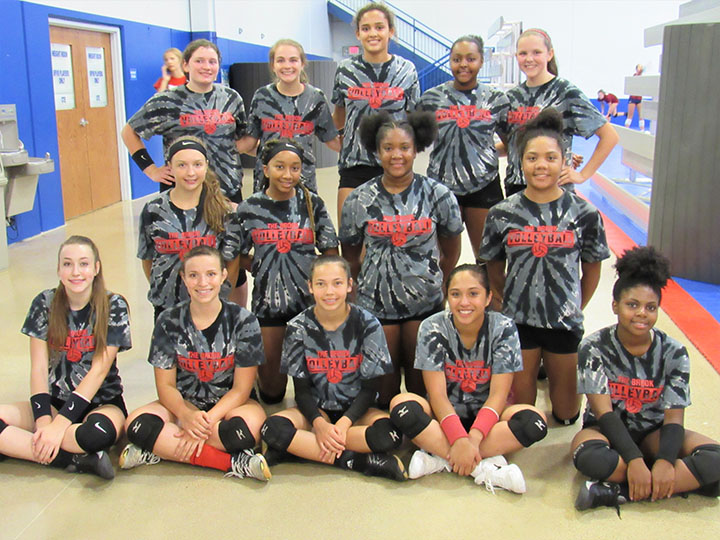 Natalie Mitchem (back row, center) is the centerpiece of the Bolingbrook program.

Illprepvb.com continues its coverage of the 2018 Illinois girls high school season with a second set of team previews.

School: Bolingbrook
Conference: Southwest Suburban Red
Head coach: Molly DeSerf
Last season’s highlights: 7-21 overall, lost to Plainfield East 17-25, 25-23, 25-21 in Class 4A regional quarterfinals.
Top returnees: 6-2 senior outside hitter Natalie Mitchem (255 kills, 22 aces, 94 digs), 5-10 junior setter Sara Magdziarz (341 assists, 47 aces).
Top newcomers: 5-6 junior outside hitter Taylor Coley, 5-9 sophomore middle/opposite hitter Lauren Shroba.
Coach’s quote: “We have a great group of kids who are invested in the game in the offseason and doing all the right things. Combine that dedication and work ethic with some talent and good things will come. This group is feisty and has a great edge to it. We still have a lot of work to do, but the girls are focused on the details and it’s showing in their play each day as they continue to grow their game.”
Outlook: Bolingbrook competes in one of the top conferences in the state and a sectional that is loaded with the likes of Plainfield Central and Minooka, but the Raiders should benefit from a year of growth and the national championship experience (SPVB 18 Elite) and continued improvement of Mitchem.
Did you know? Bolingbrook features a number of multi-sport athletes, including Magdziarz (soccer), Coley and junior Makayla Conway (basketball), junior defensive specialist Jasmine Doguin (softball) and Jayshawna Smith (track). “There are unbelievable benefits of kids doing more than more sport,” DeSerf said. “It’s tough with year-round play and the pressure to commit to one, but it’s great for the body and avoiding overuse injuries, the cross training, and being coachable in different environments.”

School: Minooka
Conference: Southwest Prairie
Head coach: Carrie Prosek
Last season’s highlights: 39-3 overall, conference champions, lost to Marist 22-25, 25-22, 25-15 in Class 4A state championship game.
Top returnee: 5-7 junior setter Zoey Seput (921 assists, 28 aces, 73 blocks, 169 digs).
Top newcomers: 5-7 senior libero Nicole Kijowski, 5-10 senior rightside hitter Bella Alessio, 6-3 sophomore outside hitter Heidi Bonde.
Coach’s quote: “We will be young and I am sure many people will underestimate us since we lost six players. But the incoming group has much better ball control then we had in the past and will step up to the competition. We improved our schedule to play higher level teams and they are ready to take the challenge.”
Did you know? Kijowski and Alessio were members of the Uno Girls 17 team that won the 17 American division of the 2018 USAV Girls Junior National Championships in Detroit, Michigan; Alessio is also one of the top soccer goalies in the state; and Bonde is the younger sister of two-time state runner-up Holly Bonde, who will redshirt her freshman season at Kansas State.
Outlook: Despite heavy graduation losses, Minooka still figures to be one of the top teams in the southwest suburbs.

School: Normal (University)
Conference: Central State Eight
Head coach: Mike Bolhuis
Last season’s highlights: 29-10 overall, 8-1 conference. Lost to Class 3A state champion Belleville Althoff 25-13, 25-21 in state semifinal, then defeated St. Viator 25-21, 19-25, 25-19 for third place.
Top returnees: 5-6 senior outside hitter Jessica McDowell (168 kills, 251 digs), 5-7 junior setter/rightside hitter Isabel Schaefbauer (417 assists, 132 kills, 148 digs), 5-11 senior setter/rightside hitter Macy Tongate (135 kills).
Top newcomers: 6-1 junior outside hitter Alayna Crabtree.
Coach’s quote: “We look to build on a very competitive season last year. We lost 8 seniors but return three of our top statistical leaders and add a deep junior class that has been very successful as a junior varsity team the past two years. We play in 3A/4A tournaments all year that we should be competitive in and that also prepare us for postseason play.”
Outlook: The Pioneers plays a rugged regular-season and tournament schedule that should prepare them for another long state tournament run. But could Joliet Catholic, which drops down to 3A this season, loom in the sectional?

School: Oak Park-River Forest
Conference: West Suburban Silver
Head coach: Kelly Collins (third year)
Last season’s highlights: 12-24 overall, 1-5 in conference; finished 13th at the Metea Valley invite, seventh at New Trier, 11th at the Mother McAuley Preview and 18th at Glenbard East’s Autumnfest; lost to (Chicago) Jones 25-22, 25-18 in a Class 4A regional final.
Top returnees: 6-2 junior outside hitter Natalie Chizzo, 5-10 senior middle hitter Zora Barnett, 6-2 junior middle hitter Zariah Woodard, 5-5 junior libero Ella Dunanva, 5-9 senior outside hitter Chloe Cantu.
Top newcomer: 6-1 sophomore outside hitter Chloe Gill.
Coach’s quote:  “We’re walking and talking differently. There is already a different feel in our gym this year compared to the past two.  Many of these kids are coming in with two years of varsity experience with us and it’s showing. Add that to the hard work many of them have been putting in since February, and you understand why we’re feeling all right this July. Our main goal continues to be competitive as possible in everything we do, everyday. Once we start putting all the pieces together, it’s going to get real fun.”