Skip to content
You are here
Home > Stories > Loyola, St. Patrick hope to be major players in 2018 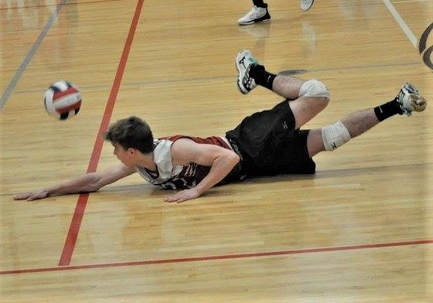 Although attackers get most of the glory, coaches know the value of a strong defense.
The 2018 Illinois high school boys’ volleyball season kicked off with the first day of practice Monday. Here’s a look at Loyola, St. Patrick, Stagg, Leyden, Montini and Mundelein.

Loyola will seek its seventh regional title in the last 10 years – and possibly more – behind a veteran crew led by three-year starter Jack Howard.

Howard, a 6-foot-5 junior outside hitter and an all-Catholic League selection the past two years who plays club for Adversity 18 Purple, played with the USA boys select A1 national training team over the summer. Last spring, he led the Ramblers with 303 kills, 40 blocks and 32 aces.

Newcomers include 6-4 middle hitter Nick Howard, who should solidify the front line with decent size and athleticism, and 6-3 sophomore setter/outside hitter John Hitt (D1 Elite 16 Green), who was named an All-American for his club team over the summer.

Loyola will have to contend with Brother Rice in the Catholic League and neighborhood rivals New Trier and Glenbrook North on the North Shore.

“We look to get back to the top of the Catholic League and contend for a sectional championship,” said coach Lionel Ebeling. “Early season tournaments at Vernon Hills and Wheaton Warrenville South and a conference matchup with Brother Rice will test us in the first two weeks of the season.”

Joel Anderson’s Shamrocks finished 19-12 overall and third in the East Suburban Catholic Conference in 2017. Six starters return from a year ago hoping to bolster St. Patrick’s bid to return to the state quarterfinals for the second time in three years.

Among the veterans is 6-1 outside hitter Brett Rosenbusch (Chicago Elite B18 Elite), a four-year starter and two-time all-East Suburban Catholic Conference selection who led St. Patrick with 381 kills last season.

“I love these kids,” Anderson said.

Anderson also loves the future of the program.

“Rosenbusch and Lis each played on and had senior brothers (setter Blake Rosenbusch and middle hitter Pat Lis) on the team that went to Hoffman Estates in 2016,” he said. “Each have baby brothers, too, so the future is bright for the Shamrocks.”

Stagg went 15-18 overall and 1-7 in the Southwest Suburban Conference with a senior-laden team that graduated five starters.

“We will be young and inexperienced on the varsity level this year,” coach Tim Kaczmarek said. “We have only two seniors on the team, and neither of them saw much time last year due to a heavy load of seniors.”

“We have a lot of player returning with experience and a talented group of newcomers,” coach Shelly Mueller said. “I expect to see great leadership out of our returning players, setting a competitive tone every day in practice that will make us a very competitive team this year.”

Expected to join those three in the starting rotation are 5-6 junior libero Axel Castillo and 6-1 sophomore rightside hitter Tyler Morgan.

Four starters are back from the 12-16 team that went 6-0 and won the Chicago Catholic League White Division.

“We should compete for a conference championship,” Opoka said. “Our goal is to stay competitive with every team we play.”

George Dressen begins his 17th season as boys volleyball coach and his 29th year coaching volleyball at Mundelein seeking to lead his team back to the 20-win plateau and a strong showing in the state tournament.