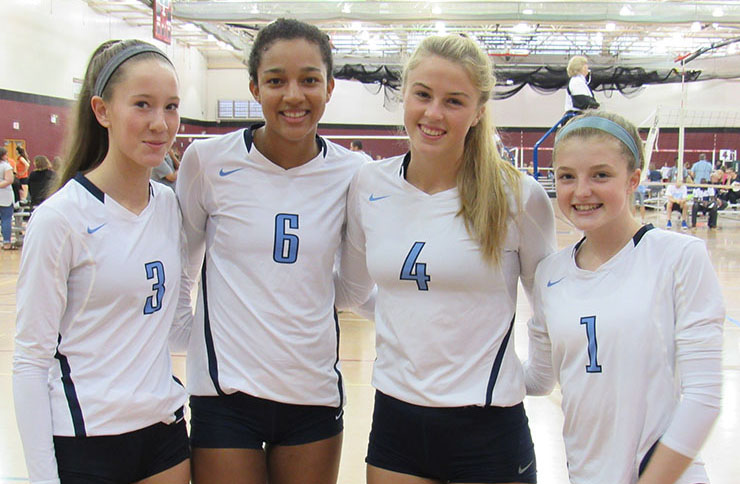 The Nazareth volleyball team prepared itself for a chaotic moment all season long. When it happened, the Roadrunners were ready.

With one of their top players, junior middle hitter Leilani Dodson, on the bench with her left ankle on ice and elevated for the third set, the Roadrunners didn’t flinch. They stayed together and pulled off a 23-25, 25-18, 25-21 victory over St. Charles North in the championship match of the 32-team Fall Harvest Fest Saturday at Plainfield Central.

Dodson (8 kills, 3 blocks) was huge with 4 kills and 3 blocks for Nazareth (26-3) in the second set. But after putting down her final kill, she twisted her ankle late in the set and sat out the rest of the match.

The North Stars (28-5) suffered an injury of their own when senior middle hitter Brigid McCarthy fell on her shoulder late in the third set.

“We train a lot for a chaos situation,” said Nazareth coach Melissa Masterson. “Fortunately, we haven’t been in too many of those, but when we were (against St. Charles North), the girls were awesome. It was a good team win.”

The North Stars had a few early leads in the final set, the last one at 5-4. Nazareth, however, scored the next 3 points and never trailed again. There were nine ties in the third set, the last one at 13-13. Another 3-0 Roadrunner run followed, highlighted by an ace from senior Sam Veome, as they captured the lead for good.

The Roadrunners got the point and McCarthy went down in pain on the play with a possible dislocated shoulder. The North Stars closed within 2 points twice. The last time at 22-20. But senior outside hitter Wren Decker (6 kills) answered with a kill and St. Charles North hit a return into the net to make it 24-20.

“We just have a growth mentality,” said Sandt of the Roadrunners’ attitude when Dodson went out. “It’s a mental game even more than a physical one, so we had to stay mentally tough.

“To win this tournament is awesome. We had so many close games with a lot of intensity. So it’s awesome to win a match like this.”

The opening set was one of those close ones. It featured 12 ties, the last one at 22-22, and five lead changes. A kill by St. Charles North senior setter setter/rightside Katie Lanz (8 kills) ended the opener.

When the North Stars jumped out to a 4-1 lead in the second set, Masterson called a time out.

“Sometimes they get inside their own heads,” Masterson said of why she called a time out that early. “So I just reminded them to focus and good things would happen.”

They did as Izzy Decker deposited three straight kills to tie it. Trailing 6-4, Dodson demolished a trio of blocks and a kill and Sandt used mostly a float serve as Nazareth went on an 11-0 blitz to take control.

Dodson had a final kill to make it 23-13 but came down wrong on her ankle and sat out after that.

“We’re hoping she (McCarthy) is OK,” said St. Charles North coach Lindsey Hawkins.  “In the second set, our serve-receive broke down and they went on a huge run. We have to minimize our errors. But we were seeded seventh here and battled until the end. I’m really proud of the team.” 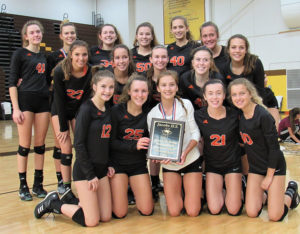 “It was our first year here and we wanted to play some different teams,” said Crystal Lake Central coach Lisa Brunstrum, whose team defeated Naperville North 25-20, 25-16 to open the day.

“We were down a couple of starters for various reasons and we played three sophomores and two freshmen. It was great to do this well against great competition.”

“We have to stay stabilized during the big points,” said Plainfield Central coach Erik Vogt. “We made a few too many errors and we can’t do that on key points.” 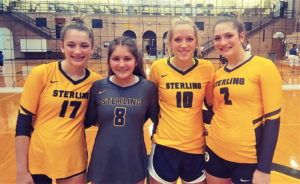 After losing its first match of the season, Sterling rebounded for a 25-17, 25-20 win over Waunakee to capture fifth place.

Sophomore outside hitter Brooklyn Borum led the way with 58 kills on the weekend. Playing at rightside hitter and setter, her twin sister Bree Borum bashed 40 kills and had 70 assists. Older sister, senior Josi Borum, banged 31 kills and added 65 assists and 11 digs from her right side/setter position.

“Absolutely, it was good for us to be in this tournament,” said Sterling coach Dale Dykeman. “All the teams we played (Saturday) were ranked in the Top 10 and we went 4-1. This forced us to do some things in system that we usually don’t do. This was a great experience and should make us a better team.”

Waunakee (43-6), which is ranked No. 6 in Division 1 in Wisconsin, followed up its fourth-place tournament finish from the previous season with a sixth-place run. Naperville North defeated Normal U-High for seventh.